Equality is a false hope 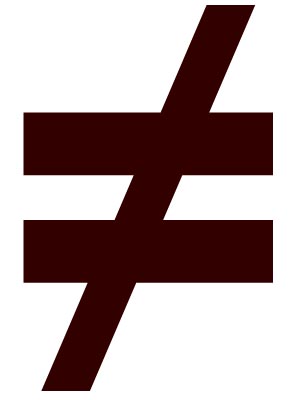 I always say that men and women don’t need equality; they need parity.

Parity means that each gender has a role which is essential and cannot be denied. These roles are preserved by the fact that they are distinctive, and cannot be swapped.

This means that in her domain, the woman is in control; in his domain, the man is. The result is a stable family where responsibilities are divided intelligently toward a collective end.

Equality, on the other hand, means two of the same thing — one of which just happens to menstruate, give birth and perform a sexually receptive role.

Under equality, the home becomes a constant struggle for power, since each parent has equal claim to every part of every role. The result is constant re-negotiation, and children are introduced to instability from an early age.

Demanding “equal degrees of equality for men” (or in other words, feminism for men) will not solve the problems of men in modern society.

It will put men into a victimhood role as well, but this is a competition they will never win. They are bigger, stronger and have more success in the workplace. They will always been seen as the dominant force, not the oppressed, in the victimhood narrative of the left.

I have described before why no masculinist can be a liberal/leftist. Leftism is the quest for equality, which results in constant internal struggle, which in turn results in a transfer of power from the dominant to the victim. Leftism will always oppose naturally strong things like men, and instead defend those who are naturally smaller and weaker like women.

Parity is a more sensible model than “equality” (which becomes favoritism to the weaker). You want women to have some sacred roles, and men to have others. This sounds old-fashioned, but then again the oldest social order in the world is every person for themselves, with constant bickering, and none of the cooperation that allowed us to rise above the level of apes.

Since 1789, when with the kings the French overthrew hierarchy, Western society has wasted itself fighting for “equality” despite equality leading to constant internal bickering. The result has alienated everyone from everyone else, because without parity of roles, any person can demand what you have at any time. As a result, people are constantly defensive.

The “Men’s Rights Movement” and “Men’s Rights Activists” of the world are repeating the error made by feminists. In seeing that some men are mistreated, they respond by demanding absolute rules, rights and lack of role according to the principle of equality. This just makes the problem worse.

A more sensible view is to find a way that men and women can cooperate without the adversity by each having sacred domains. In addition, by halving the workforce you double salaries and halve the cars on the road; you ensure that women are not mistreated by giving them an essential role, and not making them interchangeable commodities.

The only reason men today do not embrace this idea is that most are drunk on the constant media barrage demanding equality (and victimhood) for all people. This combination of martyrdom, revenge, guilt and a license to act selfishly has turned men into whiners and women into harridans.