Enjoying The Spectacle Of Narrative Collapse 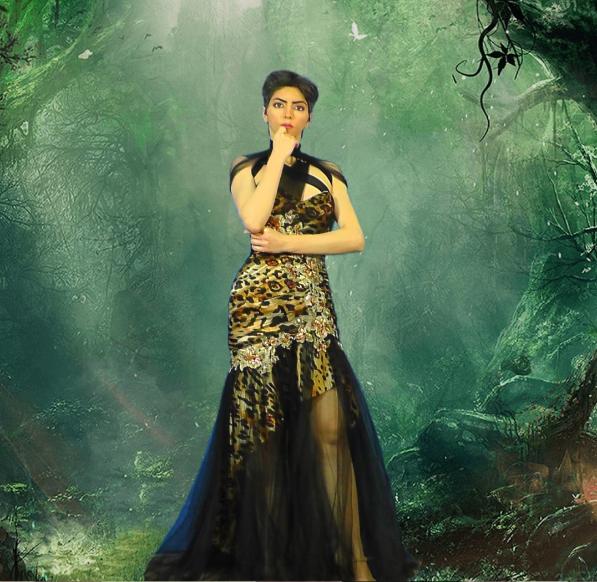 Last night the riff on social media was that a white woman had shot up YouTube headquarters. Chuckling softly at Google staff inheriting the wind of the social chaos they are spreading, most of us turned the page, figuring that this one was going to be a mess. This morning brings no disappointment.

It turns out that a crazed vegan Islamohottie shot up YouTube and then got killed. While this is sad on some level, as the old saying goes, castles made of sand only last until the tide comes in. When you construct a society of delicate and paradoxical tiers of rioting proles, diversity, ideology, and entitlement, expect a kaboom or two.

Nasim Ajafi Aghdam turns out to be a bit of an enigma. She displays herself in traditional Muslim garb on her Instagram page, which the company instantly deleted, but also engages in a bit of “Western” self-display because in an individualist time, those who fail to let their egos run wild are left out.

Viewing her personal web page (archive), one is confronted by the chaos of a society without a center. Islam, veganism, Leftism, and egoism clash and coexist on the pages, and the end result is as neurotic and schizophrenic as the nu-West itself.

Speaking of neurotic, Western media presented her as white for as long as they could, choosing to use a doctored picture which portrayed her eyes as green and her skin as light (the sheriff, however, posted the real thing below): 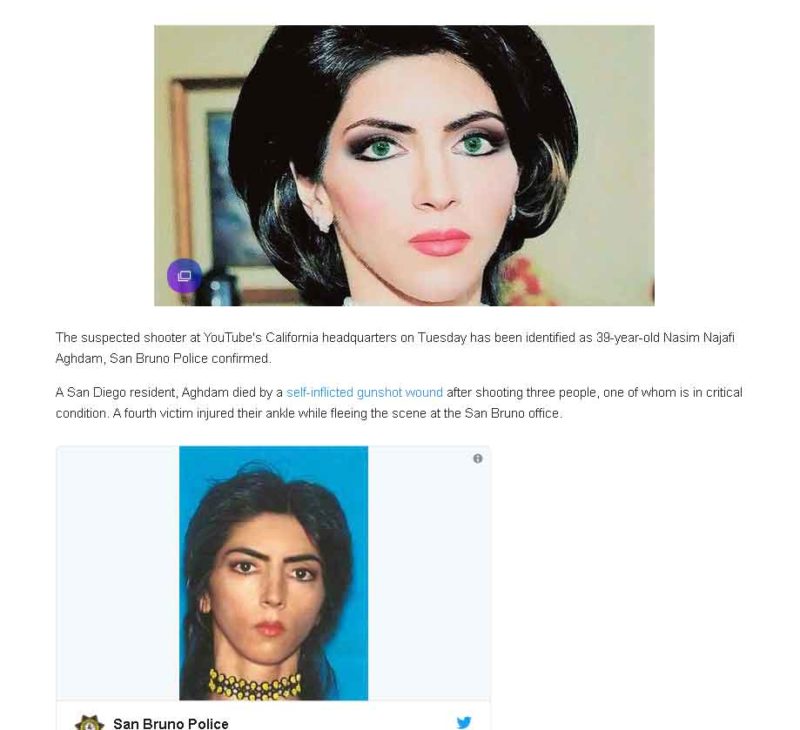 You can see this false presentation — there are plenty of better pictures — on the Yahoo! version of the wire story (archive) carried by over twenty major outlets. Your Communist media wants to keep grinding that narrative.

The narrative is thus: equality is the goal, so anyone who is more than equal is bad; white men are bad, and Western Europeans the worst of all; people with money are bad, unless they are Leftist; anyone conservative is bad; all of the world’s problems come from white people, which means that anyone not white is enlightened and good.

Their narrative backfired in that whether because she imbibed Islamic doctrine or simply became hopelessly schizophrenic in the directionless West under Leftism, Nasim Ajafi Aghdam decided to end it all in a blaze of glory. Really, who cares what her motivation was? In a society gone crazy, she went crazy.

But the Leftists out there in their cubicles could not wait to start spinning the story. They know that most people see something once, form an opinion, and act on that opinion, so their goal is always to get the fake opinion out there first. Hence they reported the shooter as a white woman.

When that became obviously debunked, they increased the narrative spin by presenting this doctored picture — to make her black eyes light green and her brown skin white — in the same way they whitened OJ in the news back in the day. They wanted to advance a fake agenda by keeping consistent with the initial reports of a white woman.

Today they will enter their endgame. Most people are no longer paying attention and will remember “the shooter was a white woman” or something similar. To keep the spin going, the clever Leftists hunched in their cubicles will claim that she was a good woman until someone was racist to her, and so she retaliated. Justifiably!

Hilariously, this event may have been triggered by Google’s use of narrative spin. Aghdam alleged that YouTube — a Google subsidiary — had demonetized and hidden her videos, leading to her attack on YouTube (archive):

…According to her website, a possible motivation for the shooting could have been tied to her many YouTube accounts, which she says have seen a decline in viewership over the past few months.

…It appears that Aghdam was disgruntled by the changes in the YouTube platform. She wrote on her website, “Be aware! Dictatorship exists in all countries but with different tactics! They only care for personal and short-term profits and do anything to reach their goals even by fooling simple-minded people, hiding the truth, manipulating science and everything, putting public mental and physical health at risk, abusing non-human animals, polluting the environment, destroying family values, promoting materialism and sexual degeneration in the name of freedom and turning people into programmed robots!”

She goes on to quote Adolf Hitler saying, “Make the lie big, make it simple, keep saying it and eventually they will believe it.”

In our media world, pointing out that someone quoted Hitler is a dog-whistle for “this is a very bad person, possibly conservative and maybe even white, the worst of all evils.” They have to double-down on their Leftist narrative of the white woman shooter, even if the Hitler quote is a criticism of democracy and Aghdam is comparing YouTube to Hitler.

As with most events in the last days of the nu-West, we are left with more questions than answers. How does a Westernized Muslim Vegan handle political censorship from the Left that is accidentally cast her way? Like so many people, she ended up realizing that reason in an insane time is itself insanity, and planned a public suicide accordingly.

Lifestyle Is Not Subculture | Transhumanism in the Ethnostate: How Genetic Engineering will Result in Peaceful Ethnic Cleansing