Egalitarianism is the god of our time 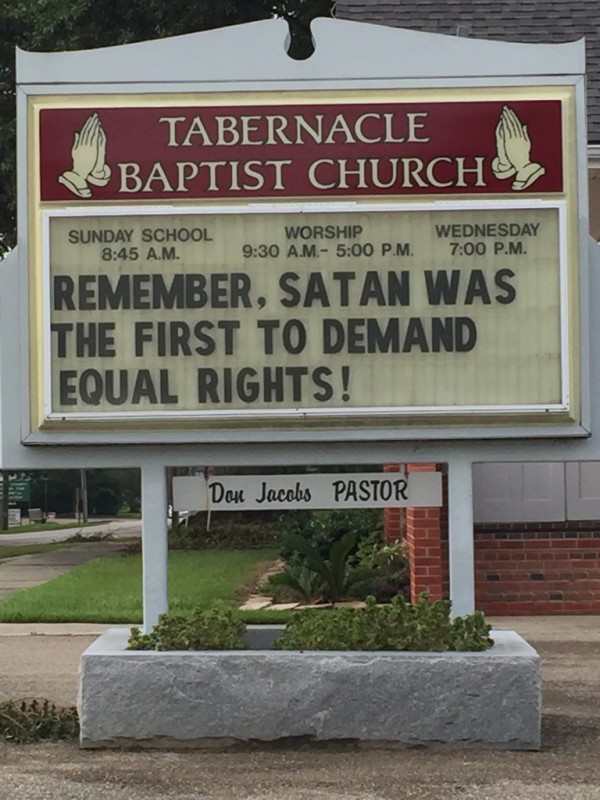 Those of us who talk about cause->effect logic recognize its power in understanding human behavior. For example, you are not free of a hated enemy (effect) until you replace the role it serves that perpetuates it (cause). Such is the case with our modern atheist, liberal and consumer-oriented society.

We have replaced all ancient gods with a single one: equality. To act in such a way as to offend equality causes people to retreat from you as if in fear of diseases or demonic possession; conversely, any activity can be justified in the name of upholding or expanding equality, regardless of its outcome. That is the key to the religious nature of egalitarianism: it is not measured in real-world results, but in the symbol itself, much like God who provides the only case where the symbol is enclosed by its referent.

For example, consider the case of education. Politicians get tears in their eyes and pound tables when the test scores come in. But what did they expect? Mathematics themselves opposes them: for any given curriculum, there must be some winners and some losers, with the number determined by how difficult it is. If you dumb it down so that everyone gets an A, it becomes worthless. People do not have the same abilities, especially not in the narrow competition for memorizing and repeating material.

Or contemplate politics. We insist that a popularity contest — “democracy” — can determine the best course of action. This denies the fact that people vote for what they understand, and most understand very little, which reduces actionable items to the over-simplified and generally reality-denying. But to mention this is to offend the god Equality and to bring on the wrath of his followers who are only too happy to have a witch-hunt.

Even in employment we engage in the fiction of equality. We like to think that we can sit down with a piece of paper that tells us everything about a candidate with specially marked fields, and that we can then hire anyone who matches those traits. These however are mere abilities, and tell us nothing about the person and how they will work with others in the team, or even how they would do in a situation as particular and unique as the average workplace.

We cannot as post-Enlightenment™ humans face the possibility of natural differences between people. It violates the fundamental idea that unites us which is that each human is the best person to make all decisions for herself. This idea arose when we replaced the order of nature and the divine with a human order. Social order of this type implies that the human is the highest goal, over reality, and therefore, that human choice is more important than real-world results. That was the path we took that branched off from all of past history and arrived at our present state.

In our view, natural differences between us — which are more mathematical, by the nature of most patterns following a Standard Distribution or “Bell Curve” — serve no utility and only serve to divide us. And yet these things evolved with us much like our other abilities. We know natural selection serves to rigorously cleanse, except in extremely isolated populations, unnecessary traits. These have persisted with humans and other groups throughout time, serving like natural selection itself to keep groups in a constant state of imbalance so they do not fall into sameness which can lead to entropy. If we were identical, all striving would cease and so would all ability for our acts to be meaningful.

Other benefits exist to inequality both within and between populations. Inside a population, inequality allows people to specialize, which means that they can devote all of their energy to developing an ability they wish to be unique to them. Inequality occurs both vertically, in terms of general competence (or even general intelligence, or g), but also on a horizontal plane. Out of all the artisans, some will become fine-motor workers like watch-makers and others will be carpenters. But some of the most radical benefits are seen to inequality between populations.

Equality outside the boundaries of a specific population would imply a Universal Human or a person who fits into any society. This idea however conveys the notion of a person without culture, unique abilities or pre-determined inclinations that might cause clash with whatever is the norm elsewhere. It also suggests a generic person, an interchangeable part, as the basis of all societies, rejecting the need for shared culture, heritage, or values. And yet as events in Japan suggest, that trust — formed of a commonality in orientation and philosophy that cannot and does not need to be put into symbols — creates a much better life:

What accounts for this unusual degree of independence? Not self-sufficiency, in fact, but â€œgroup reliance,â€ according to Dwayne Dixon, a cultural anthropologist who wrote his doctoral dissertation on Japanese youth. â€œ[Japanese] kids learn early on that, ideally, any member of the community can be called on to serve or help others,â€ he says.

This assumption is reinforced at school, where children take turns cleaning and serving lunch instead of relying on staff to perform such duties. This â€œdistributes labor across various shoulders and rotates expectations, while also teaching everyone what it takes to clean a toilet, for instance,â€ Dixon says.

She wouldnâ€™t let a 9-year-old ride the subway alone in London or New Yorkâ€”just in Tokyo.

If you want to know the solution to the problems socialism claims to address, like class warfare, or even the problems the right bemoans like a lack of public morality, this is it: have people be similar in genetics and culture. That refutes the idea of equality, where the choice of the individual determines fitness to be in a certain society, and replaces it with the notion of cooperation, or the idea that people work together on ideas that they find mutually compelling and over time, those ideas become part of them on a biological level. Without the trust engendered by similarity, people drift apart and become less likely to work together or preserve shared resources.

The now-infamous Robert Putnam study on diversity showed that in diverse populations, trust declined — even among people of the same group. That is because, like surface tension on water, similarity once broken for one becomes broken for all. Society is no longer held together by a mission and values in common, but by compulsion, whether through money or authoritarianism. This path leads to an increasing cycle of tyrannical power, petty rebellion including apathetic performance, and eventual collapse of the higher functions of the society, leaving behind a third-world style ruin.

Diversity also paves the way for a tragedy of the commons:

Picture a pasture open to all. It is to be expected that each herdsman will try to keep as many cattle as possible on the commons…As a rational being, each herdsman seeks to maximize his gain…Adding together the component partial utilities, the rational herdsman concludes that the only sensible course for him to pursue is to add another animal to his herd. And another; and another…. But this is the conclusion reached by each and every rational herdsman sharing a commons. Therein is the tragedy. Each man is locked into a system that compels him to increase his herd without limit–in a world that is limited. Ruin is the destination toward which all men rush, each pursuing his own best interest in a society that believes in the freedom of the commons. Freedom in a commons brings ruin to all.

The only force that can unmake the tragedy of the commons is a sense of shared destiny. We cannot all add as many cows as we would like, because then we kill the resource, and with it our society. Without trust, and a shared sense of purpose and destiny, that sentiment rings hollow. The individual sees no choice but to exploit resources before the other guys get to it, because they are not on his team — they are in fact the enemy. By creating freedom, society removes obligation to the commons. With equality, it destroys the notion of sharing the commons toward a mutual goal, and guarantees accelerating exploitation and ruin.