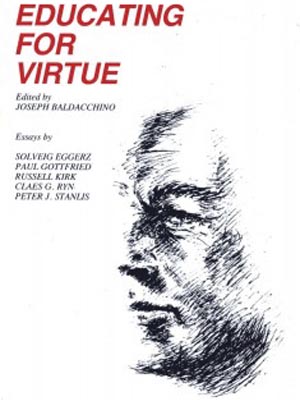 From the Foreword to Educating for Virtue, in which five scholars address one of the most pressing issues of our time: the relationship between education and the development of moral character.

â€œIf there is a single thread that runs through these essays, it is the recognition of a universal order that transcends the flux of human life and gives meaning to it. Insofar as men act in accordance with this order, they experience true happiness and are brought into community with others who are similarly motivated.

But men are afflicted with contrary impulses that are destructive of universal order. When acted upon, these impulses bring suffering and a sense of meaninglessness and despair; the result is disintegration and conflict–within both the personality and society at large. Yet so tempting are the attractions of these impulses that they frequently prevail and must be taken into account in any realistic assessment of human affairs.

This tension within the person between competing desires–the conflict between what Plato called the One and the Many–is the ultimate reality of human experience. To apprehend this reality, and to act in the light of the transcendent purpose with appropriate reverence and restraint, is the essence of wisdom; and to help deepen and strengthen this apprehension–through philosophy, history, literature, and the arts and sciences–is the overarching purpose of any education worthy of the name.â€

The tension between the one, or the person who is adapting to reality, and the many, or the many socialized and externalized voices that then become adopted by the mind of the individual, defines any late-stage society.

As Bruce Charlton is fond of pointing out, successful societies tend to make survival of the masses more likely, and thus the masses soon inundate the relatively few who are responsible for the success. This replaces people with specific abilities with those who lack specific abilities, including the ability to self-direct toward a goal.

The general idea is that in England over the past thousand years, the line between the ruling class and the the rest of the population has been amazingly fluid, and characterized by a great amount of upward and downward mobility. Certainly the downward part follows almost as a matter of course given the thesis of A Farewell to Alms, namely that the greater number of surviving children of the middle and upper classes as compared to the lower classes ensured that the descendents of those comprising the middle and upper classes would eventually come to comprise most of the entire population. This can help explain the secular decline in violence, the rise of middle class values, and the start and location of the Industrial Revolution. In short, genetics has had a decisive effect on the economies of the Western world. – Adventures in Reaction

This creates the situation that provides the parallel described in this book: in both our individual minds and in the social ladder of civilization as a wholes, we become schizophrenic, divided between common sense and the impulses and desires of the crowd. It is interesting to see how these ideas return to the fore (the book was published in 1988) as problems proliferate in the proletarian wonderland.