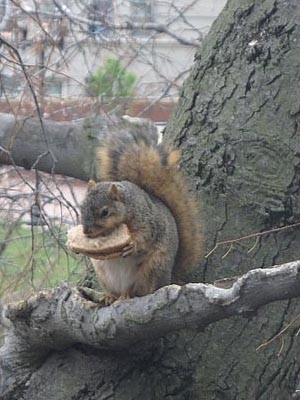 Occupy Wall Street contains the seeds of its own demise. It is not going to be a happy ending, like the transformation of the Tea Party into a powerful wing of the Republican Party, but a sputtering out that will leave the movement’s allies with a feeling of distaste. I know a frequent response to these sorts of friendly criticisms is that the critic should go down to his local occupation and discuss his ideas himself, but in this case this would be unproductive, since the flaw is not in the way the idea is being handled but in the very concept of occupation itself.

For some, the sole purpose of this protest is to make their feelings heard about income inequality. These people may show up for a day and say hello, orÂ expressÂ sympathy from the comfort of their suburban Massachusetts homes, but they will not make the movement any more powerful. For the core of believers, the draw is that this protest is different from anything that came before it: it is not one day’s march through New York, but a new community separate from evil, corporateÂ New York that represents a new way of living to the world. It is this permanency, the act of taking over a public space for an endless Teach-In, that has fascinated the liberal mind.Â As core organizers of the movementÂ wroteÂ on its secret mailing list, “We are building the community we WANT in this world. One that feeds, shelters … and cares for all [its] members. A community that hears every voice.”

This is Burning Man in New York. By entering the protest space you renounce the protection of and slavery to the police and the banks, and enter an agreement that you are going to build a community where everyone is equal and will avoid any problems of the old, evil world by being nice and respecting each other. When my sympathetic Facebook friends visit their local occupation, they come back glowing with energy from this step into the sacred sphere: the people are soÂ diverse, everyone has such good intentions, there’s so much creativity and potential here.

This cult mentality allows them to blind themselves to what the protest is really like. AtÂ Burning Man, disruptions have prevented total freedom as the population grows– and this event lasts only a few days a year. Imagine trying to sustain 40,000 artists in the desert…Â permanently. Ludicrous? Well, at least Burning Man is utterly inaccessible. If you want to be disruptive there, you have to drive most of the day through empty desert and pass through a gate where they want a $300 ticket. At Occupy Wall Street, you’re a few metro stops away from millions of people, and admission is free.

Only with this background can theÂ jaw-dropping record of crimeÂ at occupations around the country over the past few weeks can be believed, although not totally understood. How many sexual assaults and rapes were there at theÂ Greensboro sit-ins? How many police cars were defecated upon atÂ Selma? I don’t have a complete record, but I’m almost certain this is the first time a married couple has sold heroin at a political protest as their 6-year-old child watched. And this is certainly the first political protest in America that a sex offender has registered as his permanent address.

That this idea did not fall apart immediately is thanks to some clever quirks about the way it is marketed. First, because the protests are held in cities where participants can easily go to and from their homes and jobs, maintaining the protest is more of a hobby than a commitment, like a broken radio you tinker with in your basement for the hell of it. If you get burned out you can walk away at any time without losing much. Second, many Americans are used to giving money to political causes, and so a society was created without scarcity. If you as an individual or business owner consider Occupy a demand for reform, then it makes sense to support it with money. (If you realize you are giving your money to a utopian commune, then you may second-guess your decision.) Finally, due to the culture of leftist protests, any police crackdown will only renew support for the occupation.

But cracks are starting to show in this structure. Everyone is allowed to choose the job they want to do, which naturally leads to stifling bureaucracy from overcrowded committees and out-of-control kids who just want to do their thing.Â  Money is bound to dry up as long as the occupiers are not producing anything of value themselves. And the constant influx of the actual 99%,Â homeless beggars enjoying the free food and shelter, will surely be an entertaining disruption in the weeks to come.

Perhaps it should be disbanded before things get too bad. They’ve made their point, after all. But agreeing to stop fighting the police and to go home turns Occupy into just another protest and a failure as a new paradigm, asÂ Slavoj Å½iÅ¾ekÂ indeed said when he visited Zucotti Park. To be “successful”, as they are now, the protesters must try to maintain their little society indefinitely. And that spells ruin.

The problem is not in the way the protest is being run; it’s in the entire concept of the protest. What is the good about the masses whose interests they are trying to promote? Why do the 1% lack this goodness? As Irving Babbit wrote inÂ Ideas and the World, “The democratic idealist is prone to make light of the whole question of standards and leadership because of his unbounded faith in the plain people.” The 99% are the people, and are thus inherently good; the 1%, on the other hand, has not just been bad recently, but is inherently untrustworthy because it is such a small minority. If 99% of the mob before Pilate wanted to crucify Christ, these protesters would have no choice but to approve. They are unable to choose any particular strain of American culture over the other, even if one kind is dangerous to civil society, and another is the foundation of society itself.

To be allowed to join the camp of Occupy, the only creed you need affirm is political.Â The scholar Claes G. Ryn has recentlyÂ observedÂ that in modern American intellectual life,Â “issues of cultural decline are discussed as if the key to reversing the trend lay in the hands of politicians.” The reality is always, without exception, the inverse. The way people conduct themselves and interact with each other determines what they can achieve together.Â  Culture dictates politics, and a culture that believes otherwise is going insane.Â The failure of Occupy Wall Street is not in its political goals, but in the culture its structure inherently creates. Notice the utter chaos of their art and architecture, the formless, artless madness of the crowd. It could only have been dreamt up in a society that believes politics can come first and culture afterwards, and without understanding how either of these things arise.

An “occupation” can last centuries in the right hands. In the 4th century, some stray radicals wanderered out of the cities and occupiedÂ Kadisha ValleyÂ in Lebanon. Their descendants are still occupying it, based on the same principles: Christian monasticism. It takes a stronger bond than faith in the goodness of the mob to keep people together through the hardships of life and supporting each other indefinitely.

Educating for Virtue, edited by Joseph Baldacchino | Shades of gray