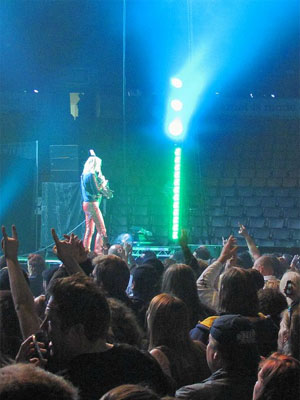 This blog post revisits a topic I started writing about long ago in the 1980s. Back then, Al Gore thought the flavor of the week was social conservative on the heels of the Reagan Revolution, and so he pimped out his crazy wife Tipper on a scheme to put obscene content warning stickers on music.

The idea was that these little stickers would warn us that the music we were about to purchase contained excessively sexual, profane, Satanic, violent or drug promoting themes. The illusion was that this would aid parents, who were only too happy to ignore whatever Junior was listening to in his bedroom.

In reality, the result was a whole lot of brouhaha that went nowhere. The right cheered and the left claimed it was the new Hitler. In the meantime, record stores began demanding IDs in advance of purchase, regardless of the visual appearance of the purchaser.

As might be predicted, the ensuing drama lasted for another couple years until everyone forget and ran on to a new trend. Parents went back to griping about what the kids listened to and doing nothing to interrupt it. Kids went back to buying music, letting it program their brains, and then the next craze.

But as they say, watch an experienced gambler. One hand does something that attracts your attention while the other covertly makes the move you should be worrying about. Those who desire to manipulate mass opinion learned a lot from the Parents Music Resource Center debacle (for that’s what it was called).

What they learned is this: if you want to censor something, the dumbest move you can make is to make a law. Don’t bother — instead, gather 500 of your closest friends and start making calls. Call the record labels and the record stores. Threaten lawsuits, threaten boycotts, but even more, find a good taboo.

For example, no one cares these days about sex, drugs and Satan. Permissiveness allows our controllers even greater power. First, it breaks down social standards except those taught in schools as political dogma.

A good taboo is something that is politically offensive, meaning that it is perceived by many people as threatening their way of life. The biggest ones are Communism, pedophilia and racism. If you accuse any person of these, it’s considered proof that they are Hitler or worse.

After all, we fought wars for universal equality. The Communists were against freedom, hated Coca-Cola and were probably closet racists too. Every one of the pillars of belief upon which we build this great nation is against Communism, pedophilia (think of the children!) and racism.

These lessons came to bear in the next half-decade when political correctness took over. It took over not because the new generation wanted it, but because the Baby Boomers had finally gotten old enough to run departments. The hippie revolution was underway in its second phase, that of adulthood.

It rubbed us the wrong way the same way any stodgy adult “you must do this” proclamation did, but also because these people wanted us to re-live their lives and in doing so, forget our own. What also unnerved us was how effective economic censorship was.

If you wanted something destroyed, accuse it of Communism, pedophilia or racism. Call up the employers of those who supported it; they got fired. Call advertisers; ads went away, and it went bankrupt. Protest in front of stores or list them as racist Communist sympathizers, and they went out of business.

A new tool of great power was in the hands of those who disagreed with ideas. All groups could use it; all you needed were enough cash-spending followers to cause economic damage, and you had virtual control over what could be seen, heard, bought or sold.

The best part was that it was not censorship. Censorship we are told implies a government or some other with singular power preventing freedom of the press or speech. Economic censorship allows you to publish whatever you want, but anyone caught with it loses their job and so no one pays attention to it.

It’s not just America. In any liberal democracy, we don’t need censorship: we simply determine that your ideas should be unpopular, and we spread the word through media, and soon consumer pressure hides the offensive material from sight.

Over the weekend, MSNBC President Phil Griffin said that Buchanan was not allowed on the air indefinitely after the release of his latest book, and has not decided whether to allow the commentator to return.

The book, Suicide of a Superpower, brought to MSNBC calls from several civil rights groups and the Anti-Defamation League to drop Buchanan for its incendiary racial and anti-Semitic remarks, among which are, according to the Times, claims that America is being damaged â€œethnically, culturally, morally, politicallyâ€ by the rise in minority populations and the lament that the â€œEuropean and Christian core of our country is shrinking.â€ Griffin described the ideas in the book as not being â€œreally appropriate for national dialogue, much less the dialogue on MSNBC.â€ – Mediaite

We’ve gone from banning Satanic drug-addicted hyper-sexual heavy metal and obscene hip-hop to chasing down the political enemies of the State, and busting them for offending us by violating the moral norms of our society. How bitter, calcified, antiquated and unstable.

Yet it remains popular because we get our cake and eat it, too. We have free speech, and we also get rid of any ideas that interrupt the constant pursuit of pleasures of the self. This way, we can maintain the pleasant anesthetized feeling that everything is just fine… until the end, of course.

Easy answers | Next revolution, don’t put the extraverts in charge