Ecocide Is the Pollution Downstream From Demotism

by Jonathan Peter Wilkinson on September 10, 2020 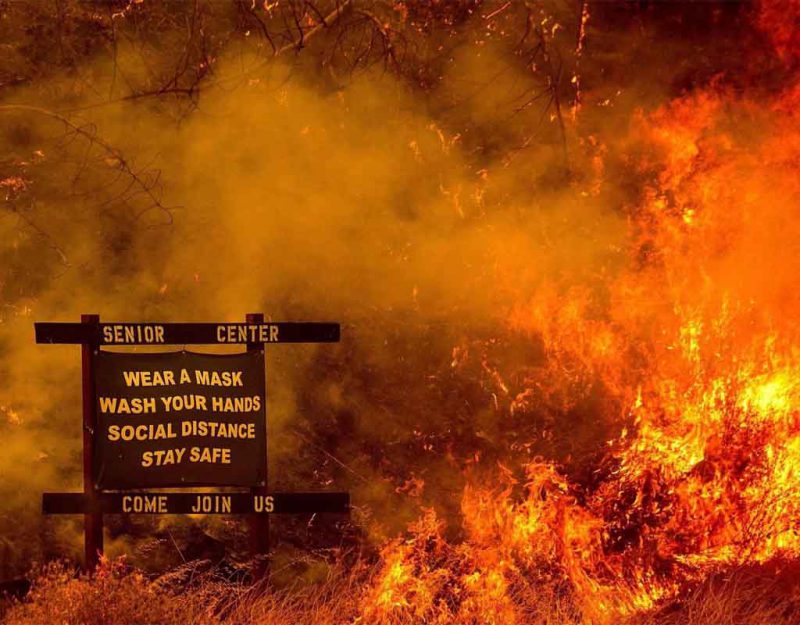 Poor human governance is creating hell. It is creating hell because the Managerial State is not husbanding the necessary resources to properly and adequately pay for all the goodies that it hands out to pay for the votes that keep it in power. The fresh steaming hell is what Northern California gets for breakfast this morning instead of what should be one of the world’s most beautiful environments.

This last item on the list, the environmental virtue signaling hypocrites, is telling. The Managerial State requires a narrative to entrain the necessary voting blocks to maintain its momentum which keeps it in power. Therefore, by bureaucratic decree; GLOBAL WARMING is worse for the environment than the following: hordes of unproductive homeless people, another horde of useless and unproductive service sector affirmative action bureaucrats, riots that set things ablaze, uncontrolled immigration, far more consumer non-durables than anyone needs or can chuck into a reasonably deep landfill, moral preening as a misdirected forestry or waterway management policy, or way too many people reengineering wild territory to hold more housing and poorly designed infrastructure.

None of the things I listed are officially permitted to be bad for the environment. The government ordered me not to believe that. Therefore, GLOBAL WARMING is the real threat. INGSOC has carefully selected it’s (((Goldstein))).

The hordes of unproductive chum voters and welfare recipients really do damage the environment. The Cloward Piven Thesis totally neglected the weight of the poor in value and poor in spirit on the planet’s resources. They deplete those resources and take up lots of space that those resources require to ever regenerate. If CO2 is a rabid female canine, then these people are literally oxygen thieves. Get rid of this sort of person or get used to an old Cracker Song lyric. It ain’t gonna suck itself.

Riots that destroy things do not advance the cause of justice. It’s very hard to get justice in a destroyed and wrecked neighborhood. What you can get is vendetta payback by having the biggest gun. You can get it by being bigger and casting a longer shadow of lethality as you pass the grim milestones in The Valley of The Shadow of Death. Only the buzzards, the ravens, and the grave worms get more justice from Antifa Lives Matter.

Uncontrolled immigration would be an iniquitous evil if all that it did was fill in necessary space. That is just the beginning. Immigrants, by definition; have no skin in the game and no stake in the ground. If they have no stake in the ground, then they have no reason not to crap and throw their garbage thereupon. Who cares about the game when you don’t have any skin therein? Nobody. The resulting neglect of the surrounding environment is not what you’d call benign.

Hamsters on the hedonic treadmill acquire more and more stuff to one-up their friends and neighbors. That stuff is cheap, holds no legitimate normative value, and probably ends up on the curbside after three years once its coolness has depreciated to zero. Then that junk is tossed or buried somewhere and becomes more trash befouling the environment. People who buy beyond what they need or truly value are a plague on the rest of us. Screw Keynesian Aggregate Demand. Focus instead on legitimately held desire and sincerely pressing need. The stuff that people don’t want and don’t need is a form of sewage that befouls the planet.

And then, after they’ve completely screwed the planet out of greed, cupidity, and Trump Wall high time preference; they have the unmitigated, fornicating gall to feel concern over the harvesting of fallen trees to make sheet wall and wood pulp. Paper, they must assume; is magically provided by the underpants gnomes. Since that isn’t the case, those notebooks your children will need, whenever they go back to school; are going to require the assassination of a perfectly good tree. This will be a perfectly good tree that did not have to fall if Georgia Pacific had just harvested deadfall some place in California.

So California burns because our leadership does not truly care to solve the current obvious environmental problems. They do not care to solve these problems because of the powerful and entitled people that solving these problems would royally piss off. They do not care to piss these people off because they live in fear of the mob. They live in fear of the crowdist, ignorant mob because they are demotists.

These leaders, unlike Siegfried and Roy; do not control the tiger. They only hang on and try to ride it. As they ride the tiger, they lack the ability to stay the swath of heedless destruction in the path of its errant career. As our elected leadership lacks this fundamental ability, they need to blame something else. Take GLOBAL WARMING for example.

GLOBAL WARMING may well exist, but it isn’t the causal vector of our environmental misery. Demotism, not GLOBAL WARMING, leads to short-sighted, craven pandering to the ignorant gabbing mob. There is no Free Stuff Army in the absence of Free Stuff. People only believe in Santa Claus when some lying sack of crap decides to cynically dress himself up and fill the sleigh at someone else’s peril.

Those wildfires in the night are a beacon warning us all that nature’s bounty can no longer meet all of the demotic promises of our morally corrupt mystery-meat People’s Democracies. Something will give, something will break, and something will die. The ecocide running amok is the sewage that flows downstream from our currently craven state of demotism.

This is what demotism condemns people to.