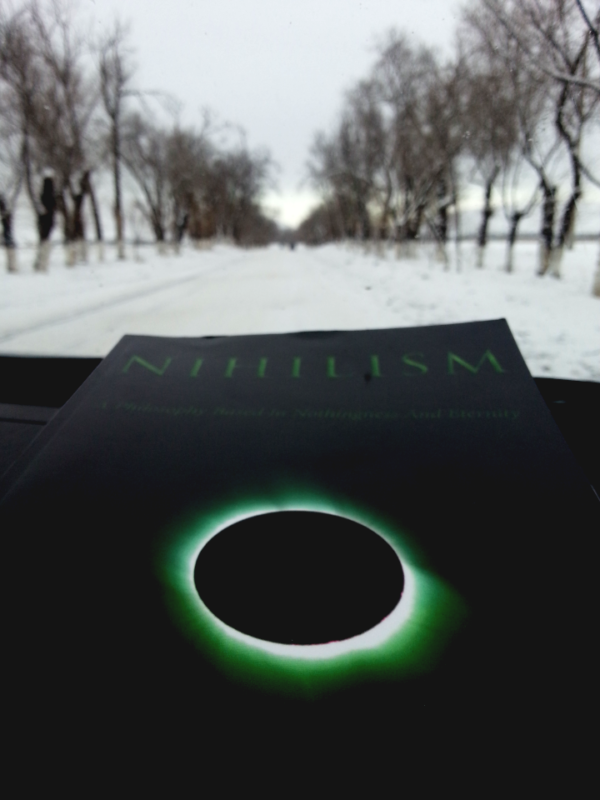 Writing about nihilism presents a problem in that most people equate nihilism with fatalism, or the giving up on any chance to make life saner, better, more pleasurable, or even excellent. Fatalism is in fact the most common human response to life, and consists of both a grudging acceptance of the failures of life because it is more convenient than fighting them, and a resentment which allows the individual to consider themselves a victim, pity themselves, and then use that feeling as a justification for indulging their self-centered urges as compensation for their suffering.

Nihilism as espoused in Nihilism: A Philosophy Based in Nothingness and Eternity, on the other hand, is a radical skepticism toward the means of perception that are convenient for humans. The large Simian brain tends to fit perception into what is convenient for its own modes of thinking, which means that it projects its own order onto reality, and tends to create a tunnel vision by making a first impression and then filtering out data that does not conform with that thesis.

In addition, nihilism rejects false dualities like “subjectivity” and “objectivity” based in universalism, or the idea that all human minds work alike, which is a projection by the individual that makes them feel as if they control their world. There is no truth, communications or standard value system; rather, each of us acts according to what we are as genetic organisms, and that determines what we can understand and thus what truths we perceive, how we interpret language and thus how we translate communications from others into our own meaning, and a values system specific to the degree of excellence and realism we can analyze and interpret.

The doctrine of nihilism wages war against proxies, or intermediate human measurements which can be gamed and therefore create dark organization within human groups. Proxies create conditions for their own satisfaction which do not achieve satisfaction of their ostensible goal, creating perverse incentives for deception by adhering to the letter of the law and ignoring its spirit. Instead, nihilism argues for a morality of cause and effect, such that we measure our acts by their results and consequences and not our intent.

This “black pill” reverses every idea of The Enlightenment,™ which posited that human reason was universal and therefore, we could understand things in groups instead of relying upon the exceptional among us to comprehend them. Nihilism is a war-cry for the competent to rise in a hierarchy and oppress the rest, even if merely by dominance of opinion, because humans are not equal and accuracy of perception is more important than ideological conformity and the social good feelings it produces.

Over at Praefuscus Ferrum, occult writer D.A.R.G. has conducted a three-part examination of the book, culminating in an inspection of its esoteric and traditionalist aspects:

Brett Stevens advocates nihilism as a gateway to realism and idealism which, hand in hand and dealt with higher intellect, take the mentality of the individual towards transcendentalism. In a summarised manner, it is an extreme acknowledgement of what is without trying to impose human illusion over the tangible and measurable universe, only to then head towards the highest ideals that we can think of in an ever-ascending path. The beneficent effect of this outlook is twofold: first, it bypasses any impulse towards compromise and mediocrity, and second, it forces us to consider the permanent first of all, and the temporal in view of it.

Furthermore, to achieve such a vision, humans are required to put aside their egos, and so any illusions of socially-imposed egalitarianism in favour of a holistic vision of what is good as per ultimate consequences. Unfortunately, some divide this into two black-and-white categories in the common means versus ends dilemma, which is only so for those afflicted with narrow minds and short sightedness. Each question should be evaluated in its own context, not dealt with in prescribed absolutes such as â€œthis is bad/goodâ€, and rather as â€œwhat will the effect of this course of action be in this condition?â€.

To follow up on these ideas, readers might also seek out the general introduction to nihilism offered by the publisher.

However, according to Brett Stevens, reality must be perceived or understood as having an underlying logic. But like the ancients and their esoteric holistic fusion of science, philosophy and religion, and unlike most post-Descartes and Aristotelian philosophy, it recognises that reality is ineffable.

This recognition may explain why so many different coherent explanations have cropped up in modern philosophy, without one or another possessing an objective superiority. This ineffability of reality leads to the esoteric method and the recognition of occult properties: those which we may never perceive directly; not even through scientific instruments, for physical science can only study effects. The apparent incoherence of esotericism, including the way Brett Stevens approaches nihilism, can only be resolved through direct experience in what is termed as a â€˜coincidence of oppositesâ€™.”

The author also explains the roots of nihilism in heuristic realism:

By destroying all illusion of human-given value one comes to a direct and plain experiencing of reality. Thereby the plain, consistent workings of an immanent reality become apparent, or the emanations and manifestations thereof. This is the Godhead of the semi-esoteric Western Christian, which in the Tree of Life consists of the Supernal Triangle containing the higher Trinity (the â€œFatherâ€, for all intents and purposes) that defines the abstract â€˜mechanicsâ€™, relations and polarities of reality at every level.

Be that as it may, such conceptualisations may serve a further conscious study, but an attentive and self-directed mind will perceive and attain these notions unaided by theoretical systems, mystical or otherwise. The individual may thus be led, in his search for value, to consciously selected methods and systems by the way they address reality itself rather than by external imposition. This attainment of power is exciting and decisive in the future of the individual.

Any writer would be fortunate to attract the readers who have written in on this book — alert, introspective, analytical and rigorous — and it is its triumph that, regardless of ultimate popularity, it has found the group who are forging the future of humanity in hearts and minds. With any luck, it will be a popular Christmas gift this year, spreading perplexity and terror to humanity.

The Benefit Of Organizations | What To Do About Obamacare