Destroy your civilization by dumbing it down 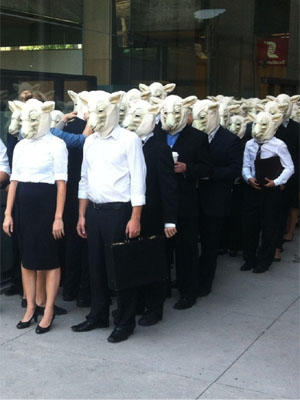 Our modern social systems all begin with democracy, and democracy has a fundamental problem: it is based on popularity with humans, and not reality.

Where an individual leader can become deluded some of the time, a group can be deluded nearly all of the time, simply because as social creatures we want to believe what our friends want to be true is true.

With enough people together, as in a committee, a socially coercive force emerges called politics. Will my friends still like me if I vote this way, or that way? Will I stand out enough to attract friends, mates and business partners if I vote for the same stuff others do?

Even more, popularity rules us through what people purchase. If you want an A+ grade product, and 51% of the market is satisfied by a C+ grade product, the C+ grade is what will be the norm and the A+, if it exists, will be a luxury and cost proportionately more.

In addition to this basic conceit, there are at least two major problems with popularity-based systems:

The result is a massive dumbing-down where the realistic range of necessary possibilities is reduced to a simplistic, one-dimensional surrogate because that is palatable to voters/buyers.

Most governments now achieve this through public schooling. They reason that school should address the needs of a mythical “average” student, and create a lowest common denominator out of that and force everyone to conform to that low standard.

The result is walking zombies who throw around words like logical, science, rational, clearly, etc. and random scientific facts as if these were in themselves arguments.

On the surface, their goal is to educate and enlighten, but underneath the surface the method is much clearer: eliminate anything above the level that the voters/buyers are comfortable with.

Such a society can fool itself but no one else. While it reduces its own standards, and produces its new elites, these elites aren’t actually elites. They’re just socially elite.

As always in the barnyard, the herd takes a vote, declares itself to be reality, and uses that new “official” designation to do whatever it wanted to in the first place, creating a disaster that takes a long time to detonate.

They always blame someone else. In the beginning, they blame the most visible enemy; in the end, they blame paranoid conspiracies. It is by this method that great empires pass into irrelevance.