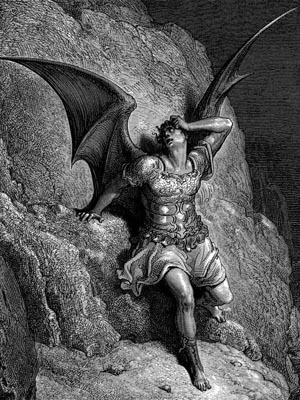 A friend once remarked to me that all sin was error. His point was that even Satan thought he was doing the right thing. Hitler, Stalin, Mao, Pol Pot and bin Laden were also doing — in their view — the right thing.

In fact, if the 20th century has showed us anything, it’s that trying to do the morally correct thing leads to the worst kinds of abuses and horrors. The more you get into trying to do what’s right, the more extreme your actions become. This is not necessarily a bad thing, if you are actually doing right.

And there’s the rub. In a time when we have cast out all common sense, all common culture, all common values and all familial commonality — kinship, caste roles, nationalism and bonds to local areas — we have no definition of what is “right” except what would be convenient for us.

Even the tired old conventional wisdom of “Do unto others as you’d have them do unto you” falls apart. What if I’m a masochist? What if my standards are lower than theirs? It’s a race to the bottom because there are no constants and no standards.

Since we have no positive standards, we have negative ones. Avoid doing unto others what might upset them and cause them to do unto you is our new motto; however, this is open-ended. What might offend them? Well, anything but you doing as little as possible to interact with them.

This is the worst type of conservative — that’s lowercase-c conservative, meaning personally conservative in the sense of avoiding bad consequences — thinking possible. If anything is offensive besides doing your job and then having hobbies alone at night in your apartment, do that: please yourself.

But the cost of that is a total lack of any social participation and an aversion to truth that is offensive to anyone. In effect, we destroy the scientific method except where it is socially acceptable, or inoffensive.

I don’t necessarily agree with this fellow, for example; he may be right, or he may be wrong. What is certain, and what is an indictable offense against science, is that he was shouted down before his position was even examined. It’s like the family of a child abuser hiding all traces in guilt and shame:

A Nobel Prize-winning geneticist has cancelled a string of speaking engagements in Britain after being suspended from a prestigious scientific laboratory for claiming that black people are less intelligent than whites.

James Watson is on his way back to the United States to “sort out” his job at the Cold Spring Harbor Laboratory in Long Island, NY. His comments caused a storm of controversy.

The scientist, who won the Nobel prize for his part in discovering the structure of DNA, was quoted in an interview in The Sunday Times saying he was â€œinherently gloomy about the prospect of Africaâ€ because â€œall our social policies are based on the fact that their intelligence is the same as ours – whereas all the testing says not really.â€

Although Dr Watson tried to quell the row with an apology last night, he was too late to prevent widespread condemnation of his comments. – The London Times

We did not even stop to think that he might be right or not. We simply did not care.

What we wanted to know was whether or not he was socially correct. And if he was not? It lets us all gain a leg up on him and show off to our friends to immediately condemn him. A line of nodding heads, all afraid to stand up to Popular Opinion, leapt forward to condemn him.

We have become whores to our own opinions, our own fears, and our own social notions. As a result, we are fully in denial of reality. Whether or not Dr. Watson was right, or to what degree, is a valid question. We did not even make it to the question.

Like cowards, we joined a big gang (or Crowd) who seized the chance to make themselves look better than him, condemned him, drummed him out of his job and eventually his career.

We are in denial, and it has made us the foulest type of liars. We lie to ourselves every day. We have made lying the cornerstone of our society, and enthroned it as a Moral Good.

Naturally, wiser heads shook themselves sadly and said, “This will not end well.” They’re both right and wrong — it won’t end well, but in the meantime, life will continue to be happy-happy-happy at the surface, and underneath, fraught with a schizophrenic sense of ambiguity and duality.

As the world turns on, we see that our denial brings about a steady increase in social problems. Since we lie to each other all the time, people have come to conlude that every social value is lies, and thus have empowered a new type of reckless mob.

Yet politicians and much of the media (including the BBC, the bastion of political correctness) persist in ignoring the facts while dishing out fashionable propaganda. And so gang members and criminals become poor, misunderstood and â€˜socially deprivedâ€™ young people, and looting and violence are justified as alleged consequence of government spending cuts, poverty and inequality. – Money Honey Blog

We still can’t talk about these issues in public. We are in denial. The first person to break silence on these issues may get Watsoned, e.g. drummed out of a career for being socially offensive when possibly — we’ll never know, since we can’t get past the taboo — maybe even sort of a tiny bit potentially correct. Who knows? Not I.

As a result, we continue to perpetrate the single most racist system devised in history. We import people who are different than our own, tell them we accept them, and then consign them to ghettoes. As they simmer in discontent, neither accepted by society nor rejected by it, we shower them with praise.

To be treated in such a paternalistic manner would make anyone explode. Yet we can’t talk about it because it might be offensive. And so the bad logic cycles on, everyone denying the obvious, hoping that problems will go away because they seem not to, waiting for the inevitable end.