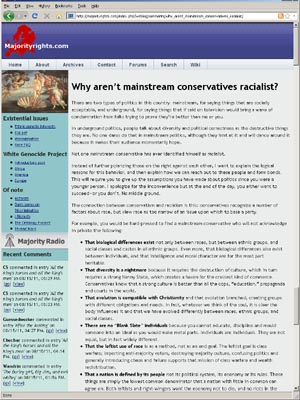 Hoping not to be an egomaniac, but to spread the word about a piece of writing I’m proud of, I’ll mention this here: I have a guest piece on the well-known white nationalistish blog Majority Rights.

We cannot ignore race. We cannot smooth it over. Instead we need pan-nationalism, or nationalism for all ethnic groups worldwide. In other words, white power = black power = Zionism = Maori power = Inuit rights = Germany for Germans = Turanian nationalism = Basque separatism = nationalism for every ethnic group, race and cultural group on earth.

My personal view is that conservatism has the most comprehensive view of race because it puts it in the context of culture, customs, language, values and identity. This takes race from a source of division, and makes it into a source of unity. Conservatives conserve: culture, land, heritage, customs, values, traditions and identities. We build where liberals destroy.

Majority Rights has always offered insightful viewpoints that cut into our modern hypocrisy about race, caste, class and individual differences. I hope to reach out to the folks there, and maybe erect a bridge between conservatism and white nationalism that does away with confusion over racism, and replaces it with positive and constructive nationalism for all races.

In underground politics, people talk about diversity and political correctness as the destructive things they are. No one dares do that in mainstream politics, although they hint at it and will dance around it because it makes their audience momentarily hope.

Not one mainstream conservative has ever identified themselves as racialist.

Instead of further polarizing those on the right against each other, I want to explain the logical reasons for this behavior, and then explain how we can reach out to these people and form bonds. This will require you to give up the assumptions you have made about politics since you were a younger person. I apologize for the inconvenience but at the end of the day, you either want to succeed — or you don’t. No middle ground.

The connection between conservatism and racialism is this: conservatives recognize a number of factors about race, but view race as too narrow of an issue upon which to base a party.

For example, you would be hard-pressed to find a mainstream conservative who will not acknowledge in private the following:

Every single topic covered by racialists is present there, but so is a much broader framework. Conservatives after all are those who conserve, or retain whole things for the collective based on what has or has not worked in the past.

Strong cultures, family-oriented societies, chaste and sober values, a strong identity and heritage, and relatively homogenous societies (think Finland or Japan) are the most successful nations on earth. Conservatives at heart want to emulate that.

Of course, with our current speech codes, such things must be said in code or in a whisper, but the game of mainstream conservatism is gaining enough power to express the basic idea, not fight over the details. The more we get a foot in the door, the more we convince the born leaders in local communities to support us.

Therein is the appeal to conservatives: they respond to positive plans that will strengthen their constituents. Angry rhetoric and single-minded single issue voting with a destructive or revengeful bent will turn them away. This is one reason they avoid overt “racists” but will support plain-spoken nationalists.

Conservatives by their very nature endorse ideas that resonate with natural law, the organic order of society, and identity politics. They dislike hatred; they love an opportunity to build and nurture the population that most accurately represents their constituents.

The notion of preserving anything outside of the individual is a conservative notion. Liberals will never do it. Even if they pretend to be friendly to racial nationalists, liberals are fundamentally opposed to the idea of telling any individual what they can or cannot do (unless it involves intolerance).

Let us look at the difference between liberals and conservatives:

Since 1789 with the revolution in France, and 1968 with their takeover of popular culture, liberals have been trying to destroy the idea of any collective values, common sense or culture held in common. They want to turn us into granular, self-obsessed, cultureless, heritageless and valueless “last men.”

Conservatives oppose this notion. For them to do so, they need a perspective that includes all possible issues. This perspective is the idea of conserving what produces good results for all people, and instead of pandering to the individual, demanding the individual rise to meet elevated social standards.

In their view, a social standard (like culture, heritage and values in common) is the root of all healthy societies. Without such a standard, we cannot agree on anything or have any kind of moral fabric except “if it feels good, do it.”

The need for a social standard is the only possible constructive argument for racial nationalism. Conservatives are the only ones who will endorse this. Reaching out to conservatives requires we abandon race as a central point, and reach out for a social standard, common values and collective identity instead, because inevitably that will lead to race, culture and soil. My fellow crypto-greens will appreciate the importance of that notion.

While mainstream conservatives are not yet ready to speak certain ideas out loud, they endorse the larger principles that must come before it and other sane non-liberal views of politis. This reason is why we should support them even if they do not word-for-word echo our own views.

I hope this enables us to further bridge between mainstream conservative, underground conservative, and nationalist groups of all types, races, ethnies and cultures. We share a struggle: a world governed by a conservative order, which includes biocultural ethnonationalism but is not limited to it.