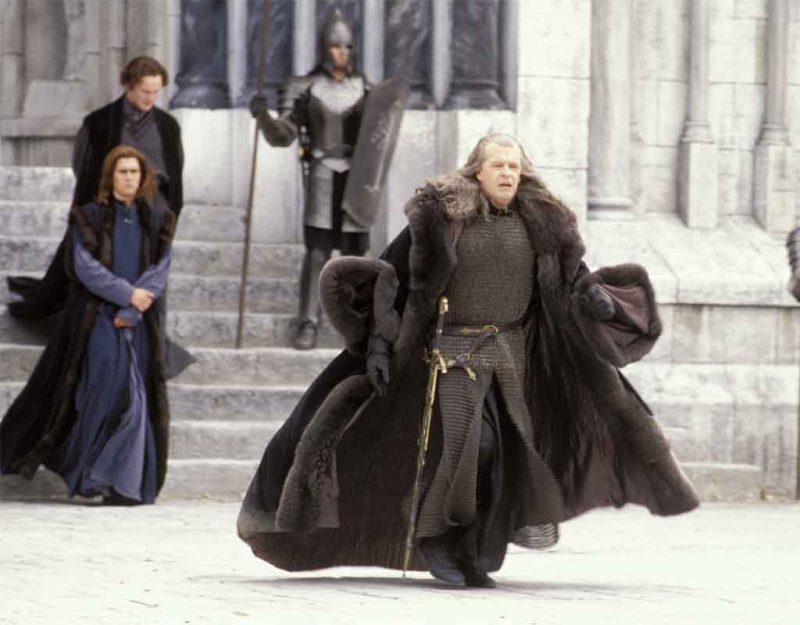 Most books take the human psyche, divide it into threads, and express that in characters sort of like a daydream on a serious topic. This fundamental paradox defines literature: it is intensely realist, but symbolized in fragments of human consciousness.

Much like spiritual practice, then, it unites the inner self with the outer world by finding parallels between the two and using those as metaphor. This allows us to see the journey taken by characters as a type of learning process and purification ritual in ourselves.

In the Lord of the Rings trilogy, J.R.R. Tolkien aimed at the disspirited modern person looking for meaning but unable to get outside of materialism and its most malignant form, narcissism.

The Hobbits represent how we see ourselves: short, hairy, plump, and generally not particularly useful suburbanites who just want a normal life, and fear that we are weak, cowardly, stupid, and too small to make a difference.

The Elves represent the union between the transcendental and the metaphysical. They are nature-spirits who also possess immortality, suggesting that if we study the patterns of nature, we can find the key to our own persistence beyond the cadaver.

The dwarves represent our practical minds; they are always the people of the shortest, simplest path to any goal. No, they are not Jews, nor are the other races other human ethnic groups, although Tolkien borrows surface traits and languages from some groups to make his races.

The evil races — orcs, goblins, Uruk-Hai — represent the excesses of our subconscious in the absence of a clear forward path for ourselves. Goblins represent the insectoid individualism that demands everything for itself and its career, gobbling up (heh) the world around it; orcs are envy and the crass (and are portrayed as chavs in the movies). These races do not represent our subconscious, but how twisted it becomes when not aligned toward the good, and therefore falls into confusion, because only the good has an affirmative goal; evil simply defends the self against obligation to do good, and ends in disorder much like Leftism, entitlement, and multi-level marketing.

Wizards represent the knowledge of history and the accumulation of wisdom, since they are essentially wise grandfather characters, and like all witch/warlock roles in literature, also represent forbidden wisdom hidden in plain sight (the occult).

Now we come to humans, which have two types: inner-driven and outer-driven.

Inner-driven humans represent our search for meaning, reality, purpose, balance, harmony, and excellence. As a result, they are naturalistic personae, raging about like a tempest or fluttering about like a prairie bird. They seek meaning in their deeds (thymos) and are capable of love (bonding across parallels). Aragorn and Faramir are the inner-driven humans.

Outer-driven humans represent our compliance with the group, our negativity and fatalism that has us expect the group to screw up and go along with it in advance, our tendency toward solipsism and narcissism (hubris), and our dwarf-like (small-minded) reliance on the material, the individual self-expression, and group drama. Denethor represents this group.

Several other humans serve as merely archetypes of classic moral failings in the Shakespeareian sense, such as the fatalistic Boromir and the envy-driven Wormtongue.

Denethor provides the most poignant example because their narcissism is entwined with fatalism as we see in the modern person; those who live only for themselves have no sense of inherent purpose, and have fallen back to defending what they have, which puts them in a negative state of mind which sees them as victims of life itself and makes them inclined to self-destruct rather than strive (in the heroic model).

Gandalf describes Denethor as typical of the people of a civilization in decline:

The old wisdom borne out of the West was forsaken. Kings made tombs more splendid than the houses of the living and counted the omens of their descent dearer than the names of their sons. Childless lords sat in aged halls musing on pedantry, or in high cold towers asking questions of the stars. And so the people of Gondor fell into ruin. The line of kings failed. The white tree withered. The rule of Gondor was given over to lesser men.

In other words, with the loss of faith comes a falling inward, a time in which inner gravity replaces outer and the person collapses into self-worship and self-destruction.

Denethor exemplifies the spirit of the senescent Gondor, awaiting rebirth. He has no faith in the future, therefore rules inconsistently, keeping people in terror of his random obsessions and fears. His son Faramir bears the most of this, being the one most likely born to rule.

When Denethor suicides, he does so in an obsession with fatalism, essentially scapegoating the world for a failure he believes is already foretold. This contrasts with one of Tolkien’s enduring messages, “there is always hope” which is paired with hope in oneself to do the right thing.

People today remind me of Denethor. They see that our society is in ruins, and assume that it is always so, instead of working toward it. They like it being ruined because that way, they have no duty beyond typical prole-fascinations like public approval, money, and sex.

They have no plan for the future, since they believe in no future, but seek to distract themselves now, which they do by manipulating others in order to avoid exceptions to the theory of doom which allows them to continue being selfish and self-obsessed.

If we could see humanity from outside of the species, we would see a variety of animal blighted by the selfishness of its members, not toward other humans but toward things bigger than individuals, like nature, culture, heritage, and natural order.

Like Denethor, they seek power for its own sake, a doom that gives them license to behave like fools, and a dramatic suicide in which they finally feel important enough to be alive, at the moment they depart life forever.