by Jonathan Peter Wilkinson on December 18, 2022 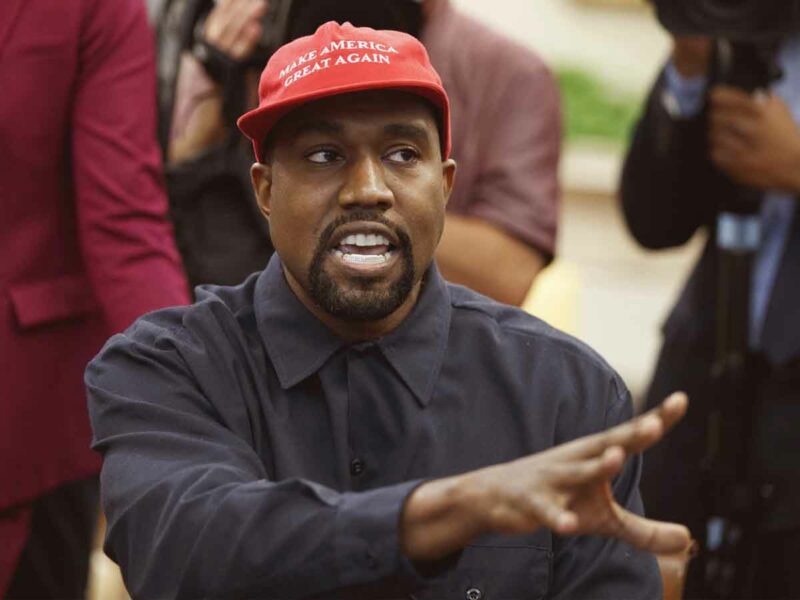 Yedolf West and Milo Y find themselves lucky. They only deal with fake and gay Nazis. The real ones tend to find Balenciaga sado-masochist dog masks as poor items of political accoutrement. That doesn’t mean that Milo and Kanye aren’t allowed to shower money on political fringe figures. Political figures will rip off a successful recording artist with an alacrity reminiscent of Ravi Shankar’s fleecing of The Beatles. But then, one day, the freak show figures lose their usefulness and allure.

At that point, a societal analog to Hooke’s Law from physics kicks in.

Hooke’s law, law of elasticity discovered by the English scientist Robert Hooke in 1660, which states that, for relatively small deformations of an object, the displacement or size of the deformation is directly proportional to the deforming force or load. Under these conditions the object returns to its original shape and size upon removal of the load.

Disgust becomes a force that triggers a kinetic recoil. This famously occurred in Nazi Germany once Adolf Hitler had assembled a sufficient base of political power to jettison the fake and gay SA wing of his party. He dissed, dismissed, and disposed of these particular assets with just the right dash of élan.

One can only tsk, tsk, tsk Ernst Röhm for not researching the retirement plan before signing up as a Pink Triangle Brown Shirt. It’s funny how what goes around can come around when we discuss systems that are analogous to Hooke’s Law. Yet what if Adolf Hitler didn’t just choose to permanently deplatform the freaks and ghouls that trolled the streets with the SA? Maybe what was left of Germany in the mid-1930s issued Der Fuhrer a fear-driven ultimatum in desperate times. Either Hitler, or the faggots could remain above room temperature, but not both.

The political extremes in modern Western democracies have similar difficulties. This occurs just the same way amongst the tenuously successful political Leftists. Their leaders just believe they have eschewed the ruthless efficiency of Hitler’s Post-Christian Barbarism. Tree-mulchers get rid of annoying corrupt figures in a much more efficient manner than the Byzantine algorithms employed by The Clinton Machine. It’s just that it leaves a public relations mess. This forces the modern political tyros to adopt more passive ways of expressing their aggression.

They find individuals such as Jeffrey Epstein to be useful. To a point. Then Epstein gets incarcerated for all the same criminal activities and perversions that were tolerated during his useful phase. Then Epstein loosens his lips a bit. At that point prison becomes a depressing place and the poor guy totally kills himself. Nobody doubts that this is exactly what happened.

This disposal method bores people too much to make Angus Young compose a bluesy guitar riff. It represents a banality of evil that would make Albert Speer hit the snooze button. Sam Bankman-Fried currently lives this sudden and jarring fall from grace. The only thing missing is the infamous intro music to the show “Cops.”

Sam Bankman-Fried, the disgraced founder of the collapsed cryptocurrency exchange FTX, was arrested in the Bahamas on Monday after U.S. prosecutors filed criminal charges, according to a statement by the government of the Bahamas. “S.B.F.’s arrest followed receipt of formal notification from the United States that it has filed criminal charges against S.B.F. and is likely to request his extradition,” the statement said… Prosecutors for the Southern District of New York confirmed that Mr. Bankman-Fried had been charged and said an indictment would be unsealed on Tuesday. The charges included wire fraud, wire fraud conspiracy, securities fraud, securities fraud conspiracy and money laundering, said a person with knowledge of the matter.

Once the effective altruism of a guy who runs a financial rip-off firm out of The Bahamas is no longer required to buy political ads, his firm gets exposed. Then we hear all about the threesomes, foursomes, and moresomes that characterized the meth-tweaker fantasy that SBF employed as a business model for running his crypto-currency firm. The details come out. The indictment happens less than two weeks after the final US Senate midterm run-off is completed and in the books.

Other disposals are ongoing. CNN tugs at our heartstrings as they describe the travails of (((Yoel Roth))) and his domestic partner.

Yoel Roth, who resigned from the social media company in November, has in recent weeks faced a storm of attacks and threats of violence following the release of the so-called “Twitter Files” — internal Twitter communications that new owner Musk has released through journalists including Matt Taibbi and Bari Weiss. Roth’s position involved him working on sensitive issues including the suspension of then-President Donald Trump’s account in 2021. On Monday, Weiss posted a series of screenshots purported to show internal Twitter documents where Roth and others discussed whether to ban Trump’s account, with some employees questioning if the former president’s tweets violated the platform’s policies.

Roth has far less to worry about from Elon Musk than he should fear from his allies. Once Matt Tiabbi exposed that Roth was “DEFINITELY NOT meeting with the FBI I SWEAR,” his career dissipation light began to rapidly flicker. Musk came under pressure to dispense with Yoel Roth and did so by publishing a few abstracts from Dr. Roth’s PhD thesis. These bits included his desire to get more teenage profiles up on GRINDR without the age restriction stuff. The noticeable lack of comment from Twitter’s prior overlord, Jack Dorsey, tells a story. These people are now radioactive. Visibility has significantly reduced their political viability.

They are no longer powerful thugs who are “DEFINITELY NOT meeting with the FBI I SWEAR.” All that remains are the PhD Thesis passages about getting the neighborhood paper boy up there on Grindr. Once the feces coin peddled by SBF goes to $0.00, it can no longer financially power some political hack’s run for higher office. Then the threesomes, foursomes, and moresomes stop just being kids having fun.

These things come out. The woo gets whipped-up. The targets of the current Two-Minute Hate become boogeymen that we can all dance to. Show trials will follow, and SBF will go to a house of incarceration where the group sex parties could become considerably less voluntary and consensual. Should he suffer from the same hubris as Epstein, that new lifestyle could make SBF become depressed.

Yoel Roth and his boyfriend will remain missing. They may or may not sleep with the fishes, but they will be no more relevant than was Ernst Röhm in 1941. This will change little. The machine will grind on. The Cathedral/Synagogue fields a deep bench of repulsive and perverted freak shows. Our modern university system has built the contemporary Sauron of globalism an army worthy of Mordor.

Perhaps the average Normie will come to believe that only an old school Night of The Long Knives will prevent repulsive creeps from wanting your adorable little boy trading on Grindr the way debased crypto traded on FTX. Our self-selecting elites are far too civilized about how they repulsively pray on people’s families and fortunes to countenance such embarrassing public slaughter. A few detestable specimens get hauled out of the deep and get shown to the rubes. It just never effects the entire corrupt and corrupting process that is the collapse of what was once a republic into a soul-sucking demotism.

And this is fine until a lot of people wake up one morning and notice. The problem with relying on panty-sniffing tranny, Sam Brinton, to dispose of your nation’s nuclear waste is that people will wonder why this person has been selected for responsibility rather than being placed under mandatory psychiatric care. When these understandably frightened and confused people then get told they are ignorant and can go self-gratify, they get royally angry. When this anger met with contempt and condescension hits critical mass, it gets almost as ugly as having that stuff Zhir Majesty Brinton disposes of hitting critical mass.

Eventually, the populace will recoil in disgust. The people will demand a purge of both the perverse and the perverted. The Weimar Republic ruled a society with infamous sexual morals and interpersonal ethics. Versailles Treaty Germany had putrefied in its own lifestyle septic tank. So was Hitler’s Night of The Long Knives an option that he sadistically chose? Perhaps his advisors told him he would kill the perverts or that the people would kill him. Perhaps that means a future Amerikan president will be told the same thing.