by Jonathan Peter Wilkinson on February 5, 2018 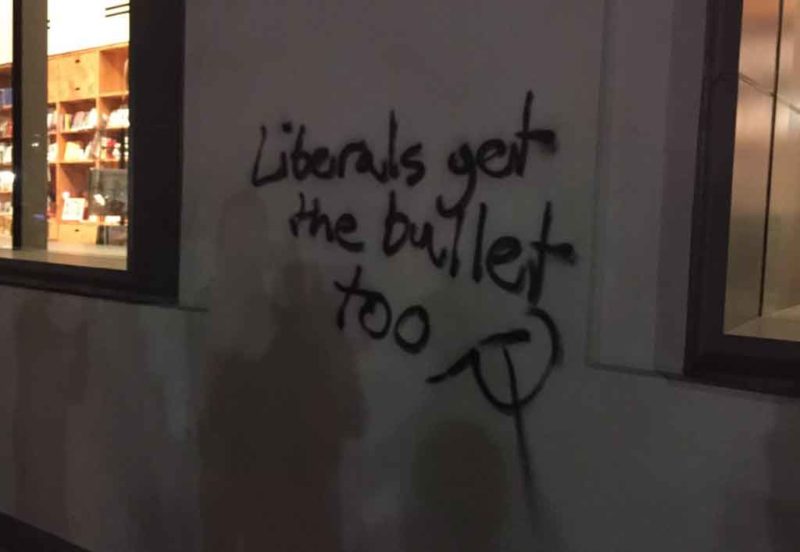 I think it’s especially special that The (((Gnu Yawk Times))) has a Conservative Columnist on its staff, as if to say, “See, we’re not all crypto-Communists.” Even if they claim Communism gets you laid more effectively.

Jokes about Holodomor Game (where you tell her “If yer a-hungerin’ Dawlin’ you can chow on Mr. Hoot”) aside, Isvestia On The Hudson is probably an unfair thing to call them. It’s totally unfair to the poor, earnest schmucks from Moscow to Magnetogorsk who simply didn’t know any better after the decades of brainwashing. After the latest from their house Biotch Conservative, David Brooks, we need an invective that properly maligns them.

The case for restricting immigration seems superficially plausible. Over the last several decades weâ€™ve conducted a potentially reckless experiment. The number of foreign-born Americans is at record highs, straining national cohesion, raising distrust. Maybe America should take a pause, as we did in the 1920s. After all, that pause seemed to produce the cohesive America of the 1940s that won the war and rose to pre-eminence. Every few years I try to write this moderate column. And every few years I fail. Thatâ€™s because when you wade into the evidence you find that the case for restricting immigration is pathetically weak. The only people who have less actual data on their side are the people who deny climate change.

That was just so much sweetness and light. I have a superficially plausible case for believing what I believe. It’s enough to make him write a moderate column and reach out in the name of understanding. But no, he fired up the narcissistic supply instead. He wants to like us, but we really try his patience sometimes. Here’s how tough it is for Poor Saint David, the thinking conservative.

Republicansâ€™ problem is that since George W. Bush left town theyâ€™ve become the East Germans of the twenty-first century. They have embraced a cultural model that produces low growth and low dynamism. No wonder they want to erect a wall. Progressives say Republicans oppose immigration because of bigotry. But itâ€™s not that simple. Itâ€™s more accurate to say restrictionists are stuck in a mono-cultural system that undermines their own values: industry, faithfulness and self-discipline.

I’m truly relieved that it’s not as simple as Rachel Maddow or Morning Wood Scarborough. Now we’ve had it all Twatsplained to us by David Brooks. George W. Bush good. Trump bad. Obama awesome! Teabaggers bigots. Go forth, take your opioids like a good Crackerman, and sin no more. It’s enough to make me want to tell David to mow his own stupid lawn, or at least hire somebody here legally. Yeesh! Charles Blow probably just got a contact high off the smug cloud. Can you imagine how rapidly opioid abuse would decline if people like David Brooks didn’t go out of their way to give anyone who deigned to disagree with progressives a headache?

I get that it flatters and twitilates Progressives to no end to believe all of White Amerika’s problems stem from not being enough like them. And make no mistake about it. #NeverTrumpers like David Brooks, and the fine folks at The Resurgent and Weekly Standard, are the Honkey House Knee-Grows of the Progressive Left. They are the Right that will still be permitted to exist once the rest of us Po’ White Trash have all been made to feel The Bern in some SJW’s version of The Havana Bull Ring Trials. Thus when it comes to articles of Proggy faith and dogma such as immigration and climate change (what direction is your forcing, David?) they move quickly to keep a lid on any hootin’ and a-hollerin’ down in the quarters. David would never want Massah Schumah and Mizzus Pelosi to start getting all riled up and concerned.

But when you dedicate your existence to envying the trouser crease of your supposed ideological enemy, it’s not very long before you lose any reckoning of what you are still claiming to be. When someone secretly wishes they were somebody else instead, The Law of Attraction kicks in. When you look up to and fawn over someone long enough, that’s what you become enslaved to. This is what has happened to David Brooks. If he knows anything, he’s probably had to repress it to maintain his job.

For all of this man’s claims of wading around in evidence, I can’t help but wonder why there seems to be this pungent, unpleasant smell. Are the boots he wears tall enough to keep all that evidence from ruining his favorite pair of trousers? Actual data at The New York Times could be as rare, precious and jealously guarded as water on The Planet Arrakis. He works in an atmosphere where the truth is rare like verifiable, reproducing life forms on Mars.

And yet he has adapted, projected and repressed. He seems inoculated against legitimate introspection the way Winston Smith had killed his conscious with Big Brother slogans and Victory Gin. Quaffing deeply of the Victory Gin served up by doctrinaire #NeverTrump Resistance, he has become utterly dead to self-examination and completely unfeeling towards the Conservatives he supposedly represents and defends at The Old Gray Zhlady. As much as he ridicules people from places like the one I proudly call home for their alleged sins of opioid abuse, I can only think of one piece of music that would accurately describe the mental state of the odiously defective David Brooks.

Trump (Indirectly) Drains The GOP Establishment Swamp | Is The Alt Right Pursuing A Revenge Of The Nerds Strategy?