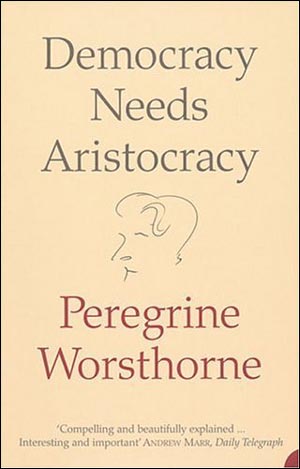 In the early pages of Democracy Needs Aristocracy the author mentions Alexis de Toqueville and his groundbreaking Democracy in America and not surprisingly, the newer work continues in the footsteps of that classic with a broad-reaching thesis on the nature of government that sides with the organic over the mechanistic.

Experienced writer Peregrine Worsthorne mixes his far-reaching thesis with personal narrative and precise examples in the form of contradictions that eliminate exceptions to his arguments. He writes in a hybrid style somewhere between relaxed academia and vivid popular non-fiction but with the logical thoroughness of a legal brief. Like the topic of the book itself, his style spans a vast breadth of knowledge and distills it into a single voice, like condensation turning mist to rain.

As a consequence, Democracy Needs Aristocracy is both one of those books that zooms by at light speed as massive ideas thrust the reader across time and space, and is also like a textbook an exacting read that requires the full attention of the reader. Each chapter drops important pieces into our understanding of history and how we arrived at the present time, not all of them controversial assertions so much as forgotten and decontextualized ones.

The style is not circular so much as it returns to core concepts after breaking them apart, bringing the forgotten but necessary counterpart to deconstruction, re-integration, to the reading process. As a result reading this book is like peeling an onion, with each layer revealing more of the big picture. It offers what few books can manage anymore: a vertiginous sense of discovery and concepts dropping into place that can explain the subtle mysteries of our present political climate.

Worsthorne’s thesis suggests that aristocracy, or an organic social order of the most qualified who enforce a balance that linear-thinking government cannot, not only arises naturally but if well-selected, provides an elite who are dedicated to public service more than themselves. It succeeds because it is decidedly non-mechanistic: he delights in the social aspects of an elite dedicated to stewardship, and illustrates how civility as a guiding principle ensures politics do not become abandoned to abstractions unrelated to life itself.

Finally, he contrasts society under rule by aristocracy, whose members are secure in their position and steeped in its tradition, with the “meritocratic” rise of the “classless society,” and points out in detail how the classless society fails to achieve its objectives and may achieve instead the inverse. As both an aristocrat and a journalist, Worsthorne describes the view from both sides of the bench on this issue.

A good part of the book addresses the necessary conditions of his thesis, including the most difficult to define parts such as “civility” and the notion of an organic, non-governmental caste who nonetheless provide the backbone to all governmental activities. For moderns, understanding caste is like trying to understand the use of a pressure cooker inside a black hole; Worsthorne elaborates slowly, but works up to his point:

Aristocracy, however, is different because the bonds forged at birth and maintained at every subsequent stage in life, create a degree of loyalty between members as strong as, if not stronger than, those that bind together the members of a nation. The Old Etonian George Orwell tried to escape them but never wholly succeeded, concluding sadly, at the end of his life, that it was easier to change your party than change your class. Speaking personally, I cannot imagine life without class, which is not a passive condition but one that provides you with a general culture, a network to which you naturally belong, a stream of history in which you feel free and safe — almost a collective individuality. (86)

In his retelling of history, the UK survived the time of the French Revolution because unlike the French, the English did not centralize their power into a single agency, but made government less efficient and instead cultivated a class of experts, united by a code of civility or “gentlemanly” conduct, such that they could conduct the appropriate circumventions of authority in smoke-stained lounges over glasses of cognac.

In this Worsthorne’s view is a hybridization of elitism and anarchy, in which the purpose of aristocracy is to avoid a powerful central government and its Boolean rules, and instead to cultivate a pool of talent that can organically and covertly address problems that are beyond the understanding of the electorate. His appeal to civility, the mode of aristocracy, is a call for a moral renovation to the modern state.

For as a result of this method of selection, Britain’s political class had inherited enough in-built authority — honed over three centuries — and enough ancestral wisdom — acquired over the same period — to dare to defy both the arrogance of intellectuals from above and the emotions of the masses from below; to dare to resist the entrepreneurial imperative; to dare to try to raise the level of public conversation; to dare to put the public interest before private interests; to dare to try to shape the nation’s will and curb its appetites. (50)

Bureaucracies, which he describes as the “natural enemies” of aristocrats, rely on rigid rules of a binary nature. When triggered, they must follow through blindly, causing periodic outrages so ludicrous they remind us of the rote actions of a machine out of control. In contrast, Worsthorne advocates the reliance on a class of people he describes as devoted to public duty, and their ability to intervene in place of blind rules.

As he reminds us, good leadership is unpopular because it does not pander to the arrogant intellectuals or emotional masses. In fact, it avoids special interests so that the nation as a whole can thrive. He describes it with a metaphor from his boarding school:

I wanted the best of both worlds: authority figures who at one and the same time both protected me and left me alone; who came to my aid in emergencies but otherwise allowed me to mind my own business. Officious busybody prefects who kept an eye on one all the time were more a liability than an asset. But unofficious prefects who noticed what was going on from a corner of the eye were the opposite. Even more to be desired were the few older boys who turned down the office of prefect but were natural authority figures on the side of justice and order requiring, by virtue of strong individual character, no official badge of office. (22)

This winding book, arcane like an ancient castle yet refreshing like finally finding the answer to your research in a footnote in the last book even tangential to your “official” topic, provides many such challenging ideas. Underlying every part of it is a distrust in the idea of a government that unites its public and private faces and thus is manipulable by special interests; Worsthorne argues for an older yet, if you look at it critically, more mature form of government, where rule by quality of people predominates under rule by book of rules.

Democracy Needs Aristocracy is a challenging and engrossing read, and even for those hostile to aristocracy, provides a thorough exploration of where our current systems of government fail. His thesis is flexible, and deliberately written from a liberal-friendly position, to show that democracy becomes anti-elitist mob rule without some mediating elite to keep anti-egalitarianism from becoming crowd revenge. As such, it is every bit as eternal as de Toqueville, and presents a vision of government that none can afford to fully ignore today.

You can find this book at Amazon for $15 or from Harper Collins UK for Â£9.