Like most inward-looking regimes, the United States faces a threat it cannot see. While it is busy fighting out minutiae and dividing itself ever-further, its lazy wealth has made it forget that currency loses value if the nation issuing it looks like a “bad bet.

All but a few people in this society have a simple view of money: $5.49 buys a certain amount of milk, beef, gasoline or bullets. However, like everything else in life the value of currency is a moving target. 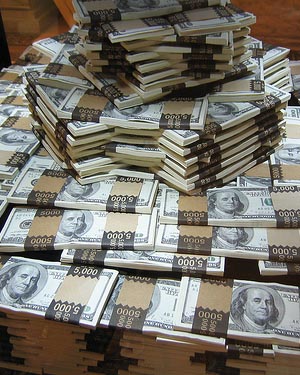 Much of our profit comes from finding value in transition, and using a lower-valued form — one nation’s currency versus another, one type of commodity, a company or brand — to leverage transition of currency into hard goods or resources.

The whole wisdom of buying gold is a case in point. If your currency is about to take a giant dump and devalue, don’t wait for that to happen — buy gold now, and when the currency devalues, you can transfer that gold back for more currency. If you’d just kept the dollar amount, you’d have “lost” money (really: lost money value).

If on Thursday, our government is going to lose a war, I’m going to buy gold for $1000 an ounce on Wednesday and on Friday, sell it for $2000 an ounce. Did I make money? Yes, by avoiding losing it through transferring value through the purchase of gold.

The world is watching the USA anxiously. We are both a superpower and the biggest economic powerhouse on earth. Dollars are a good bet to buy when we have faith in the USA to continue that path. When the USA appears to be flakin’ out, we the people of the world don’t want to buy dollars — we buy gold. That makes dollars less desired, and so cheaper, just like any other commodity.

One huge problem the USA faces is that we’re devaluing our currency:

Dear Reader, I’m sure you have enough to worry about with our political drama. However, if you want to keep an eye on our practical filter, consider our currency. Nothing in life succeeds unless it can feed itself, and in the industrialized world, we need to keep producing value or we end up becoming a recipient state that sells its labor and natural resources cheaply, as most of the third world does.

I agree that our political issues are important but if we ignore the most basic necessities, we won’t get far.

Tea Party | Who are you better than?