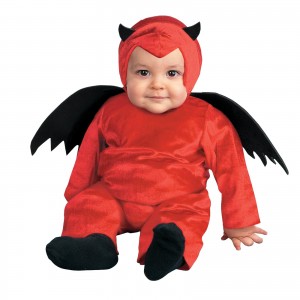 Long ago, our ancestors faced the problem that most people were completely incapable of dealing with or understanding the world around them.Â  Therefore, a series of myths and metaphors were established in order to help people deal with the hazards of life.Â  Since then, not a thing has changed.

One of these myths, found in various incarnations around the world, is that of evil spirits.Â  In the West, we have the anthropomorphized devil.Â  People like the idea of the devil for a number of reasons.Â  One of those reasons is explaining evil in the world.Â  Of course, along with that explanation comes a lot of baggage.Â  The worst of which would have to be people’s love with using this metaphor as a scapegoat.Â  We even have this ingrained in our language with such well known phrases as “the devil made me do it.”

As well educated, modern men and women (OK, there aren’t any women reading this but you get the point), we know that this is a load of crap.Â  Very few people latch onto the notion of a devil except perhaps in a very abstract form.

Or maybe not.Â  It seems that modern liberal dogma has its own devil.Â  Namely, something it refers to as “culture.”Â  Sane people generally think of culture as something like this:

the arts and other manifestations of human intellectual achievement regarded collectively : 20th century popular culture.
â€¢ a refined understanding or appreciation of this : men of culture.
â€¢ the customs, arts, social institutions, and achievements of a particular nation, people, or other social group : Caribbean culture | people from many different cultures.
â€¢ [with adj. ] the attitudes and behavior characteristic of a particular social group : the emerging drug culture.

Culture for most people is an innocuous term, or even a positive term. It should be a positive term. Â  However, for some people culture is the ultimate boogeyman. Just listen to this (thankfully deceased) drugged out loser pontificate on the subject.

Culture, to these people, is an all present evil force that acts on people like an autonomous agent bending its victims to its will.Â  This leads naturally to the desire to escape its tyrannical grasp.Â  All over we see and hear so called intellectuals discuss the evils of various products of culture.Â  Oh how people love to demonize any concept they can by labeling it a “social construct.”

All of this begs the questions:Â  Why do people hate culture and why do they view it this way?

There are innumerable ways of approach this question and dissecting it.Â  There are a multitude of various psychological phenomena that could be brought in to shed light on the issue.Â  However, all roads lead to one fundamental concept.Â  Liberals hate culture because it arises from order.

Liberals hate order because it means having to act responsibly, according to social and political laws, towards a higher goal that is decidedly not the individual.

Fundamental to fighting back against this assault is the necessity of destroying the myth of the liberal devil.Â  Culture is not an autonomous force.Â  It isn’t a force of all.Â  Culture is a part of us.Â  It is ingrained in us.

Viewing culture in such a demystifying way is not particularly attractive to many.Â  After all, who doesn’t love framing disagreements as part of the Culture War.Â  Sensationalism like this works for a while, but what ultimately wins people over is down and dirty pragmatism.

Pragmatism is the death knell for the liberal devil.Â  Without its big, bad bogeyman, liberalism just doesn’t have any political clout.