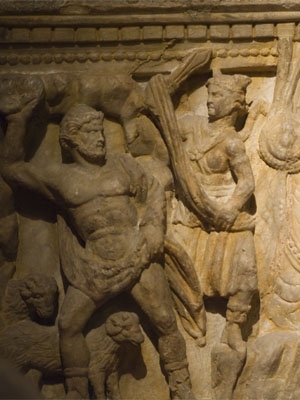 Since it began, Western Literature has been in a state of devolution. The first two books produced by a Western mind (more likely a whole bunch of minds) were the Iliad and the Odyssey. These are archetypes of what a literary masterpiece ought to be.

On the lowest level, they are just really awesome adventure/war stories. It is unimaginable that before the invention of the television any child under the age of 18 could have described the stories in these books as â€œboring.â€

On a more advanced level these tales illustrate almost every social relationship to be found in ancient Greece. One sees the ideal son in Telemachus, the ideal friendship in Achilles and Patroclus, the ideal military master in Odysseus (specifically when he deals with Thersites), and so on. These parts of the tales give a piecemeal picture of how a society should function and how people ought to relate to one another and the gods.

On the highest level, Homer’s stories defined the values that made someone a Greek, and most importantly a good human being. Homer was the educator of all the ancient world. Unlike the politically correct books we read to our children today, the Iliad is a book about courage, honor, and valor. It is about a war fought by two opposing camps, not of good vs. evil, but of good and noble vs. strong and courageous.There were no barbarians or evil forces, only Continental Greeks and Anatolian Greeks fighting over their honor and dignity.

Nietzsche, who loved Homer about as much as a person can without being an ancient Greek, said that the noble and strong man would invent his own values. He would smash the tablets of good and evil and create his own tablets of morality. While this is undoubtedly a beautiful tale, I don’t see it happening, and I don’t think it is happening; it is not likely to be possible in our time.

Perhaps here and there a strong person can go into the woods and live how he wants, but this is not exactly the way Nietzsche envisioned the coming of the future philosophers. Nietzsche wanted to create Homers and Alexanders and Napoleons — not hermits inconsequential to society. Ultimately, Nietzsche’s ideal has the same romanticism about it as does Han Solo.

The real question is: what is causing our cultural disintegration? This cannot be answered in a blog-post or even a book. An easier question would be what about aspects of contemporary society are actively opposed to the fermentation of a unified culture. The big two seem to be technology (mostly the internet) and living in a society that accepts liberal democracy, with all that is entailed therein.

When we live in a society that actively promotes diversity (of cultures and ideas), equality, and change/progress/the unique you will inevitably start producing whole generations that strive to not be like the others. Where traditional cultures strive to emulate the ancestors, we strive to forget them.

When you couple this with a technological framework in which everyone is given a free outlet, and in which information of any slant is available in just a click, there is no chance that anything resembling unity will emerge.

Under these conditions people will either do what is popular or will look for like-minded people and gather information from sources they already agree with. While we ourselves are somewhat guilty of this latter approach, it is infinitely better than the former.

What is better than both of them, however, is a conscious return to our roots, where even disagreements have a common point of reference within a shared cultural framework.

Contra Nietzsche, we don’t need to look forward to find our values; we need to look backwards, to the tradition and the culture that shaped us. To understand the situation that we are in now, your best bet is to read the ancient Romans who commented on their own declining state.

Without a unified background and history, something we are losing in the West, there is no hope for a political or cultural unification. An early step toward that unification is to understand our culture — the origins and the values that shaped us — through literature.