Could The Civil War Have Been Avoided? 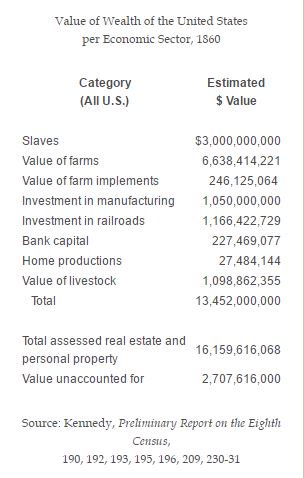 From Calculating the Value of the Union: Slavery, Property Rights, and the Economic Origins of the Civil War, by James L. Huston.

When a society is caught in one part of the historical cycle, it loops on the same concepts. President Trump recently opened a can of worms when he asked whether the Civil War was avoidable:

“People don’t realize, you know, the Civil War, if you think about it, why?” Trump said during an interview with the Washington Examiner. “People don’t ask that question, but why was there the Civil War? Why could that one not have been worked out”

Trump said Jackson — who died in 1845, 16 years before the Civil War started — would have been able to figure out how to avoid the conflict between the North and the South.

What Trump touches on is a simple truth: the Civil War was fought to conquer an ideological enemy and take their wealth. The North, enmired in the ugliness of factories, resented the South for having a less egalitarian but more elegant civilization.

As with all Left-leaning societies, the North was outspending its capacity and threatened by the possibility of an option to the increasingly gnarly life in the industrial cities, and saw a chance to both assert its ideology as the only possible way of life, and bolster its depleted coffers.

This war could have been avoided. Instead, we fight it again. The Left wants progress, which means even uglier cities and daily lives of conformity and pointless “hard work” jobs that achieve nothing important, and the rest of us want a society which rises from the ashes of modernity toward the kind of wholesome, fulfilling life that the South had.

Since we have industrial machinery now, slavery is not even a factor, although it seems that American blacks suffered less violence and poverty under slavery, which made them valuable members of the economy instead of disposable labor worth only what industry would give it, and less now that we have found new bulk labor in immigrants from the rest of the world.