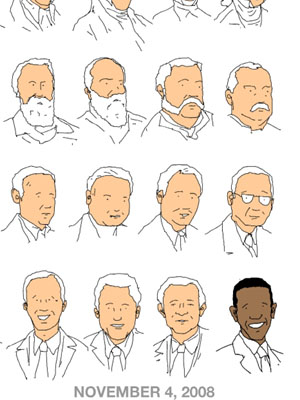 It’s hard to believe that leftists are as adamant about race as they seem to be. The primary point of doubt is that so few of them practice what they preach.

A typical leftist use of race as an issue seems to be to silence the opposition, prove his own compassion and altruism, and finally, to ignore it as he drives home to his white-with-a-few-token-well-behaved-others urban loft or suburban row.

Race is a potent weapon. If not applied with a strictly non-judgmental view, the notion of race itself threatens the ideal of modern liberalism, which is that society is composed of sovereign individuals and the highest goal is for the society to be facilitative, or enable them to act as they find fulfilling, independent of consequences.

As the consequences of 200 years of leftist policy slowly gut our country, the leftists are sensing that their conquest is near complete. Their ideas are so pervasive that few dare challenge them, and those are quickly shouted down.

However, the real conquest here will belong to nature and natural law, which over the course of centuries methodically sorts of the response to our acts as a species, and just now is able to show us the consequences of the prior generations of liberalism.

We can sense a little bit of this in the continued failure of liberal programs. The war on poverty produced more impoverished people; the war on racial inequality produced more racism on all sides; the great crusade for universal acceptance has result in greater divisions within our society.

As a result, the ideological brainwashing has reached its peak. It is impossible to make any public advocacy of a plan without re-iterating its commitment to equality (the poor, civil rights, race, gender equality and sexual preference agnosticism). Media and social sources alike seem to emphasize the same ideas as absolutely true.

“Even in Hitlerâ€™s Germany the infatuation for medals, titles and uniforms never reached the peak it has in the proletariatâ€™s promised land. On the kolkhozy (collective farms), a visitor is apt to meet a Znatnaya Doyarka (Distinguished Cow Milking Woman). One of the latest additions to the new Soviet aristocracy is Honourable Coal Miner E. P. Baryshnikov.” – Time Magazine

We have reached a stage like the late Soviet Union, in which ideology matters more than reality, and we have taken our ideology to ludicrous lengths to ensure that we drown out any mention of the Emperor’s New Clothes being non-existent.

What is most non-existent is a plan for the future beyond enforcing the ideology. Our entire system rests on the idea that if we achieve our ideological goals, through magic a paradise will result. We have experienced “progress.”

The problem is that in order to achieve our liberal ideological goals, we must first deny reality by insisting that not only are people politically equal, but that they are actually physically equal.

The two are connected. Political equality is a dubious concept because it means the vote of an idiot is equal to that of a genius. Because the bell curve that applies to intelligence distribution through all populations tends to place most people in the middle, we figure that voting cancels out the idiots and geniuses and gives us a good representation of what should be done. The problem is that right in the middle of that bell curve is a cut-off point below which people cannot generally understand the issues they’re voting on, and most of the voters are beneath that line.

Brain size and smarts are, to some extent, genetic â€” and now, a team of more than 200 researchers has uncovered specific genes that are linked to both brain volume and IQ.

Though scientists have suggested bigger brains are “smarter,” this study is the strongest case yet for a genetic connection to brain size and to IQ. Of course, brain size is not 100 percent correlated with a person’s intelligence, and other factors, including connections between brain cells and even a person’s experiences, play roles.

“We found fairly unequivocal proof supporting a genetic link to brain function and intelligence. For the first time, we have watertight evidence of how these genes affect the brain,” said lead researcher Paul Thompson, a neurologist at the University of California, Los Angeles, School of Medicine. – Live Science

It’s immensely unpopular to admit any positive trait is hereditary. That makes the assembled group of voters feel bad, because that means if you don’t have it, you never will. It’s not in the cards. (They have no problem with negative traits being heritable, however, because it allows them to imply that those they dislike are broken at the most basic level.)

The result is a mania that has no stop point. The conquest that liberals want isn’t a conquest at all because it has no goal. It is only an eternal ideological war, against tinier and tinier details that imply differences between individuals or (bite your tongue) groups of any kind.

Like most religious fervors this trend did not originate under a revivalist’s tent but it might as well have because it is just as fanatical, and just as invested with confirmation-bias-style reasoning, in which any new data is crammed into the existing outlook, which itself is never reconsidered:

Liberalism is at the peak of its conquest now, but only because the second act has not yet begun. The first act was liberals promising a paradise if their ideology was followed, and the second act will be a long series of systematic failures of those liberal ideological crusades.

Perhaps on some level liberals know this, which explains their fanatical desire to “close the gap” and force us all into mental conformity before the cracks in the system become more visible. But that didn’t work for the Soviets, either.