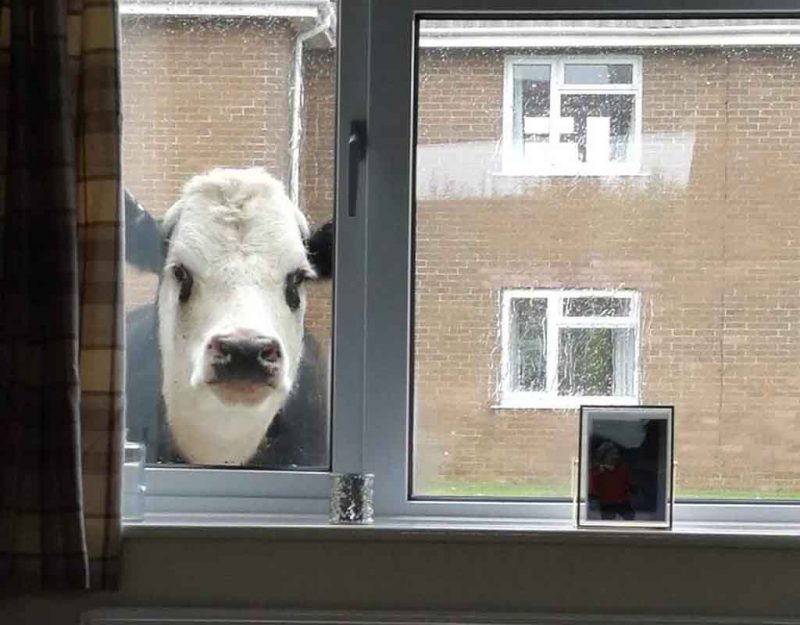 Leftist Governor Iam Wrong would often be seen battling the rising crime rate and rising tensions in his state, but today he was battling another matter entirely. His office had had a peculiar stench for some time now, and he was apt to be rid of it. Therefore he called a cleaning specialist, a one Mister Jeremy Wright from out of town, since no one in town could remove the smell. Jeremy entered the state, a bit fearful with all that you heard on the news about it, a state that had been under the political control of the Left for some time now. Nevertheless Governor Wrong had promised good recompense for his journey and every night he had to stay in this place, so he had come.

The Governor himself met Mr Wright at the town hall and led him into his office. As soon as he entered Jeremy came to an abrupt halt. Standing in the middle of the room, completely apparent, was a cow. Jeremy rubbed his eyes but when he opened them the cow gave him a lazy stare and continued chewing its cud. Governor Wrong simply walked around the cow and to his office seat as if it weren’t there.

“So what do you think?” The governor asked taking a sniff, “You smell it don’t you?”

What Jeremy smelt was the cow, plain as day, “Yes I do but…”

“I can’t quite place what the stink is.” The man cut him off, “Rather odd smell isn’t it?”

Jeremy was completely nonplussed, “Sir,” He said sharply getting the man’s attention and then gestured to the centre of the room, “The cow?”

“Cow? What cow?” The governor barked.

Jeremy turned and the cow mooed as if to say, ‘Don’t waste your time.’

“Well the one right there sir.” Jeremy pointed, “It’s standing in the middle of the room, plain as day.”

“Nonsense, there’s no cows in this room and if there were, it would not contribute to the stench that is befouling my office.” The man said, “Now, I imagine you will begin conducting your work soon, so I shall clear out my things and leave you to it.”

With that the Governor rose and left the room. Jeremy watched as he left and then approached the cow. He reached out and touched it gently. It was definitely real, so the man walked outside and asked the secretary about the cow, but she denied it existed as well. However, when he had called in his cleaning crew from out of state, each of them stopped at the sight of the cow. It was truly an odd phenomenon, was it that everyone else was just ignoring it, when it was clearly the cause of the problem? One of them suggested removing it, but somehow Jeremy thought that that might only serve to anger the Governor. Instead they cleaned the rest of the room from top to bottom, they scrubbed every inch of it and afterward the room smelt as both a mix of cleaning products, air freshener…and cow.

When the Governor returned he noticed the smell immediately, “So even an expert such as you claim to be could not rid me of this stink.”

“The stink will stay so long as the cow does.” Jeremy said.

“Oh you and this cow!” The man said frustratedly, “The cow is not the cause of the problem.”

“So you admit that there is a cow?” Jeremy asked.

“Yes, yes, the cow is there, but so what? The cow has been there for a long time, and it is not to be moved from this office.” The man said gesturing to the cow.

The cow gave a moo that seemed to say, “I told you, you are wasting your time.”

“But Governor, you see now that the cow has to be the problem. We have cleaned every other inch of the room, the cow is the only thing that remains to be removed.” Jeremy insisted, how could he not see it? “Sir approach the cow, you’ll see that the stench gets stronger near it.”

“If we removed the cow from the room, the stench would disappear as well.” Jeremy offered.

But the governor waved his hand, “As I said this office did not smell before, and the cow was always there.”

“Maybe it does not smell because others are accustomed to it. You are a new governor, the cow smells ripe to your nose, you can be the one to get rid of the cow.” Jeremy said.

Again the cow mooed as if to say, “I have been here since the first Governor and unless there is a radical shift in their thinking, I will continue to be here as they deny the problem. It is the same with their politics, they wish to fix their state insisting that their views are not the root cause, that their way works and ignore the evidence before their very eyes. It is maddening for someone like you to try and convince someone like him otherwise, so please, save your breath.”

The governor replied with, “The cow is not the problem, I am sure of it, so sure of it, I will just have to find someone else that can clean better than you. Yes, that’s it, a better cleaner, or a stronger air freshener perhaps, or some other thing that will rid me of this stench.” Seeing Jeremy’s disappointment he added, “Trust me lad! Many have tried, you are the first to insist it is the cow, but I am sure that the cow is not the problem the same way I am sure of my politics.”

Whatever ramblings the man posed Jeremy with, he didn’t hear them, for it seemed to him that the only thing that came out of his mouth was “Moo.”