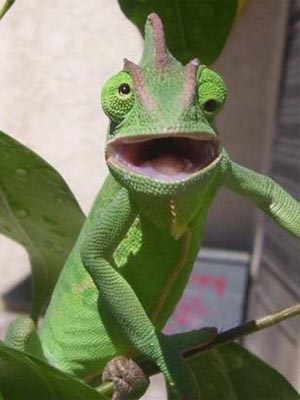 Some people think you can go through life without tragedy and suffering. To my mind, this is a sick fantasy, since suffering and tragedy drive so many of our best moments.

For example, war is terrible but it allows many men to confront their own fears, master them, and find a purpose clearer than any before. Death brings sadness and a chance to come together. As always in nature, nothing is wasted and nothing is “pure” — life and death are intertwined.

In our modern cities, we can hide behind walls, abstract logical containers and “purpose” of a material nature. This helps us deny the reality of death and suffering. How can we think about demise when we’ve got all this solid material stuff, hard science and big money to think about? It seems immortal.

And this brings us to the problem of modern society.

We live in a dying time. Quite literally our civilization is collapsing from within, and not surprisingly, only a few can see this. The rest however don’t see much of anything; if they have a tidy apartment, some hip restaurants, and shiny objects to play with, they think everything is OK.

That is the surface problem. The underlying problem is inertia. We make our decisions by what is popular; very few people care about what is logically correct, truthful, realistic, honest or even simply measures consequences instead of feelings.

They want to pay attention to the human world of feelings, products, socialization, moral judgments and other statements of the individual ego. They want to live in a world apart from reality itself, a human world, and ignore the consequences of their actions in the reality beyond humanness.

We can see this in (some) religions as well as in (most) atheists. We can see it among (almost all of) the average intelligence, but also among (most of) the highly intelligent. It is not a logical question. Before we get to the logical question of “what is true?” we have to already care about truth, and most don’t.

Conservatives of the original sort — not the plastic suits on your television talking about free trade — cared about something entirely different than what modern humanity cares about. They cared about harmony with nature, the consequences of our actions, and building a society that rose as a whole.

Modern people care about themselves. Their money, their convenience, etc. They are oblivious to the underlying infrastructure that makes this possible for them, and even more so, to the attitudes required to make such a thing. It’s off their radar. Society tells them that this does not matter.

Our society as a whole is leftist, in that it is based in the individual and the individual’s quest for equality, specifically the freedom to do whatever they want without consequences. Leftism hates consequences and it hates hierarchy of all kinds.

In fact, it is motivated by hatred of life itself, because these things are inherent to life. Leftism hates life so much it creates a replacement for life itself through socialization and human emotion and judgment.

By controlling what our populations care about, leftism is able to cut truth out of the picture. They replace it with convenience, and as a result, have shut out conservatives entirely. Conservatives care about things that are anathema to leftists.

Another post in Breivik’s name in October 2009 advises “Hans”, described as the founder of Document.no, to “develop an alternative to the violent extreme Norwegian Marxist organisations Blitz, SOS Rasisme and Rod Ungdom” — all left-wing movements in Norway.

“The conservatives dare not openly express their viewpoints in public because they know that the extreme Marxists will trump them. We cannot accept the fact that the Labour Party is subsidising these violent “Stoltenberg jugend, who are systematically terrorising the politically conservative,” the post reads. – CNN

Any time someone shoots up a school, mails letter bombs, blows up a federal building or slaughters teenagers in Norway, most people reveal how fake they are. They start talking about how horrible the event was, even though more people died in drunk-driving accidents that day than were shot.

People are grandstanding and pandering to others when they talk about how terrible it was. They’re trying to manipulate the emotions of others. They are doing that for their own advantage.

For sixty years, the left has entirely shut out the right. They deny legitimacy to any demands of rightists. They censor, lie, steal, cheat and suppress. Then they act like the injured party when a WWII, Oklahoma City, Pekka-Eric Auvinen, Jeff Wiese or Anders Behring Breivik comes about.

The reality of the situation is that many humans still are realists who recognize that there is life beyond individual judgments, feelings and choices. They recognize that society is a collaborative effort, and that if we do not keep it up, it begins a path into ruin and all suffer greatly for it.

Breivik’s aim, he says, is to achieve a “monoculture” modelled on Japan or South Korea.

These “role models”, he says, “represent many of the European classical conservative principles of the 1950s” because they are “scientifically advanced, economically progressive” societies “which will not accept multiculturalism or Cultural Marxist principles”.

He adds that they are today the most peaceful societies “where you can travel freely everywhere without the constant fear of getting raped, ravaged, robbed or killed”. – The Telegraph

But we don’t even get to the phase of talking about that in this society, because we’re living in pre-Idiocracy times: people don’t care about our future. They care about what’s on TV. Bread and circuses? Hell, now we’ve got 500 channels of cable, legal prostitution, drugs/booze out the wazoo, and celebrities. Take that, Romans.

Consider these factors as you approach the shootings/bombing in Norway with moralizing and judgmental thoughts. Yes, no one likes violence and death; yes, on the surface, this was a tragedy. However, if we do not reverse course, we face a greater tragedy, one in which all of us will be victims.

As part of my continued mockery of Glenn Greenwald’s crowd-pandering statement that the media will ignore the Norway attacks now that it’s clear a white guy did them, I present to you the front pages of American newspapers today. 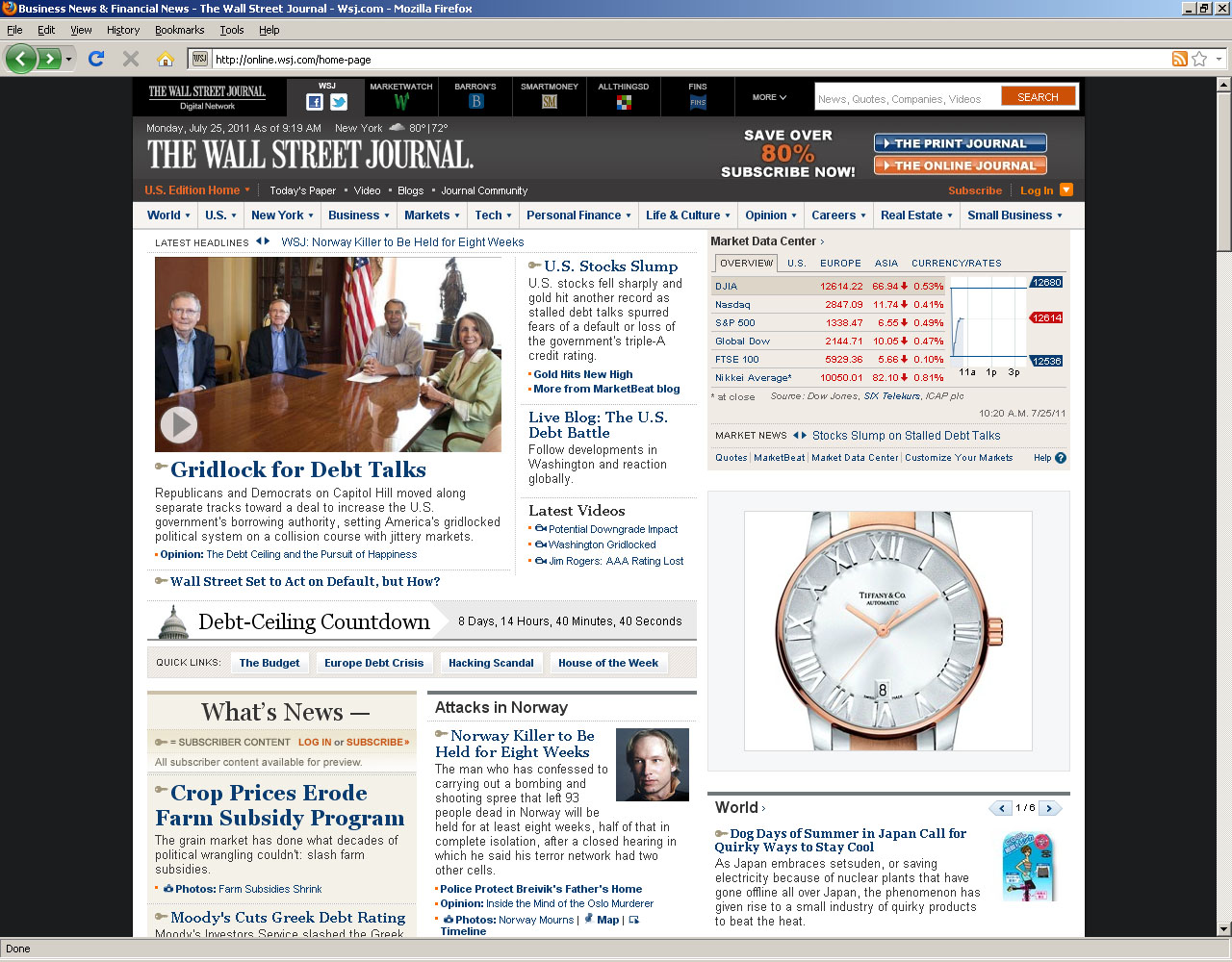 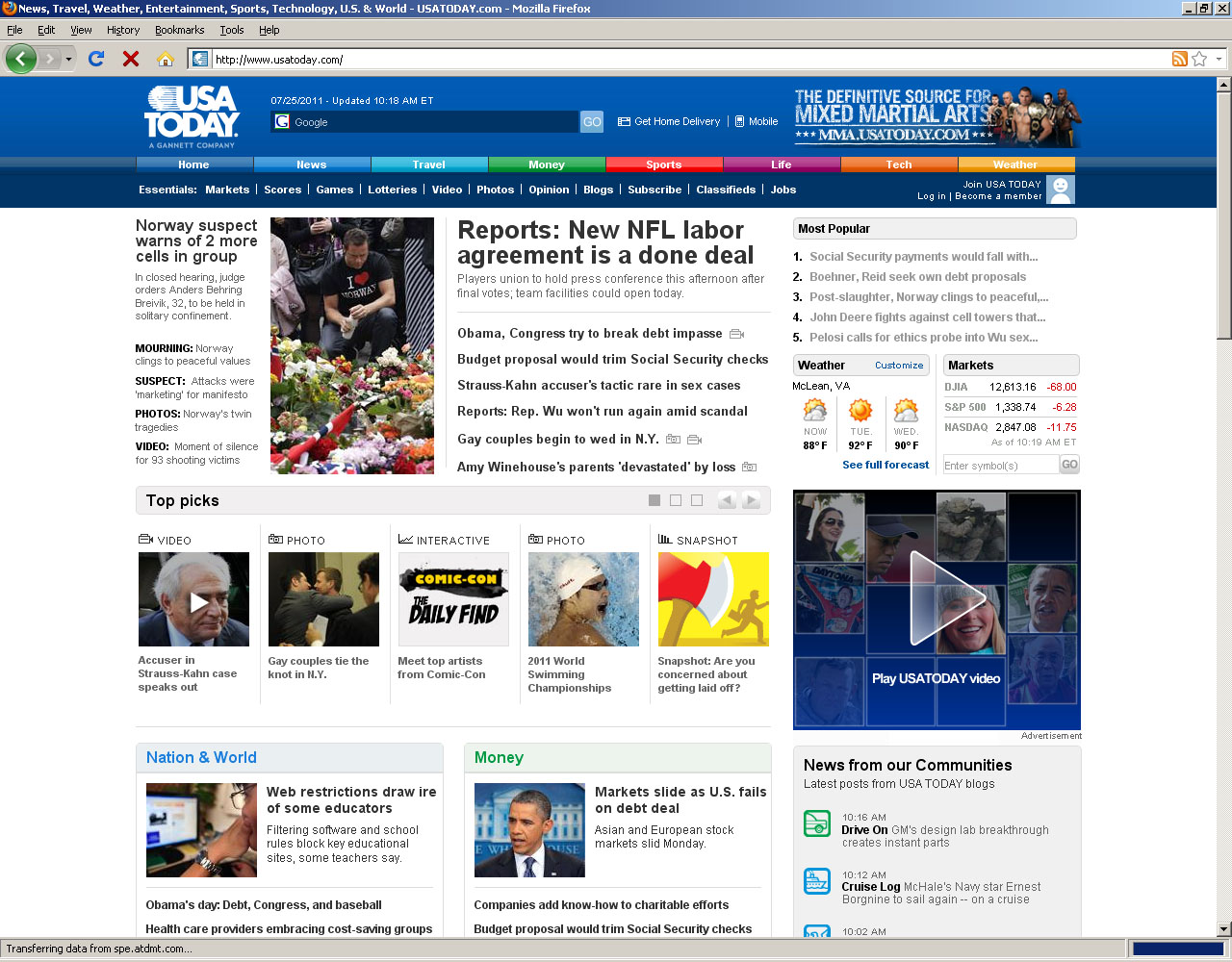 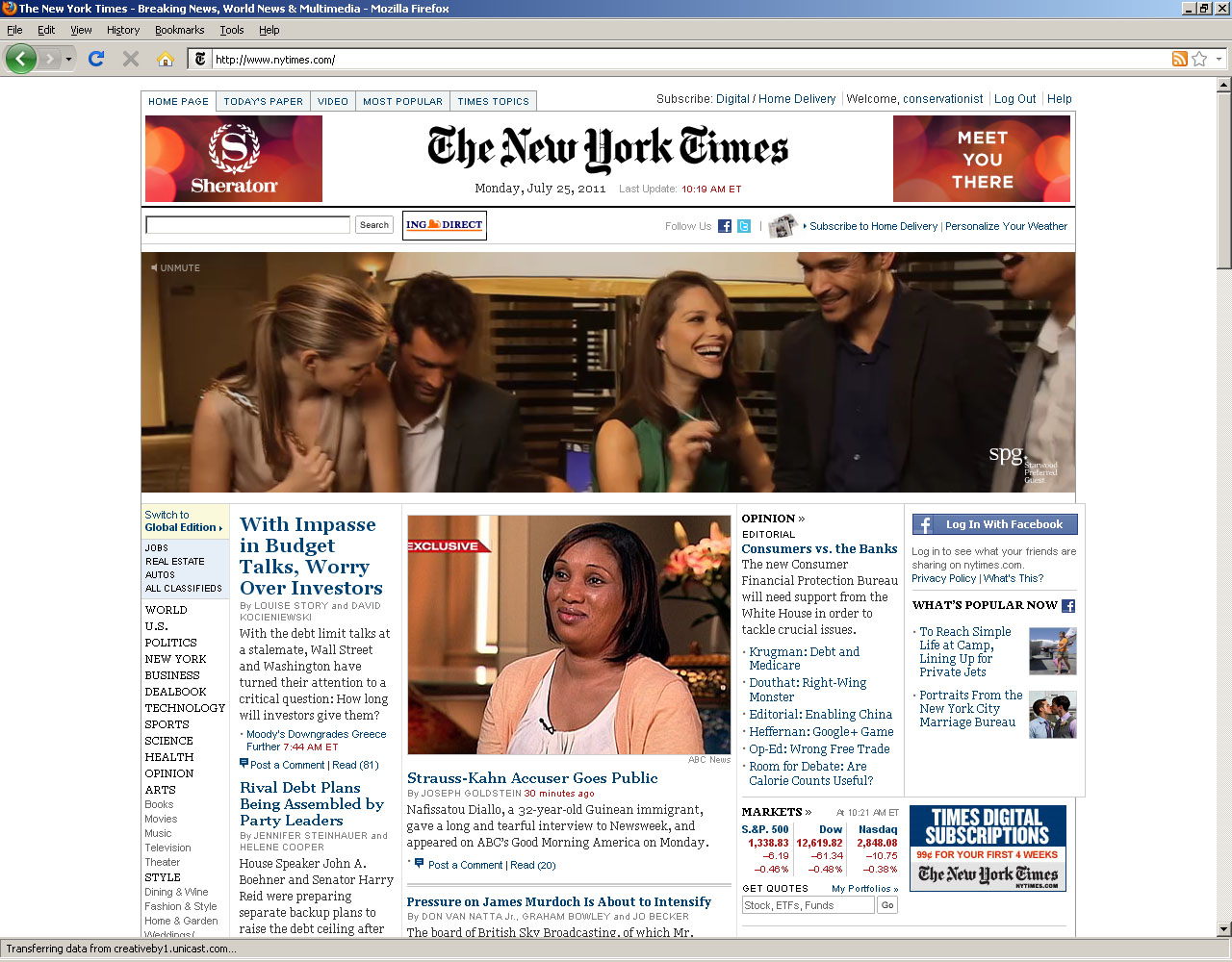 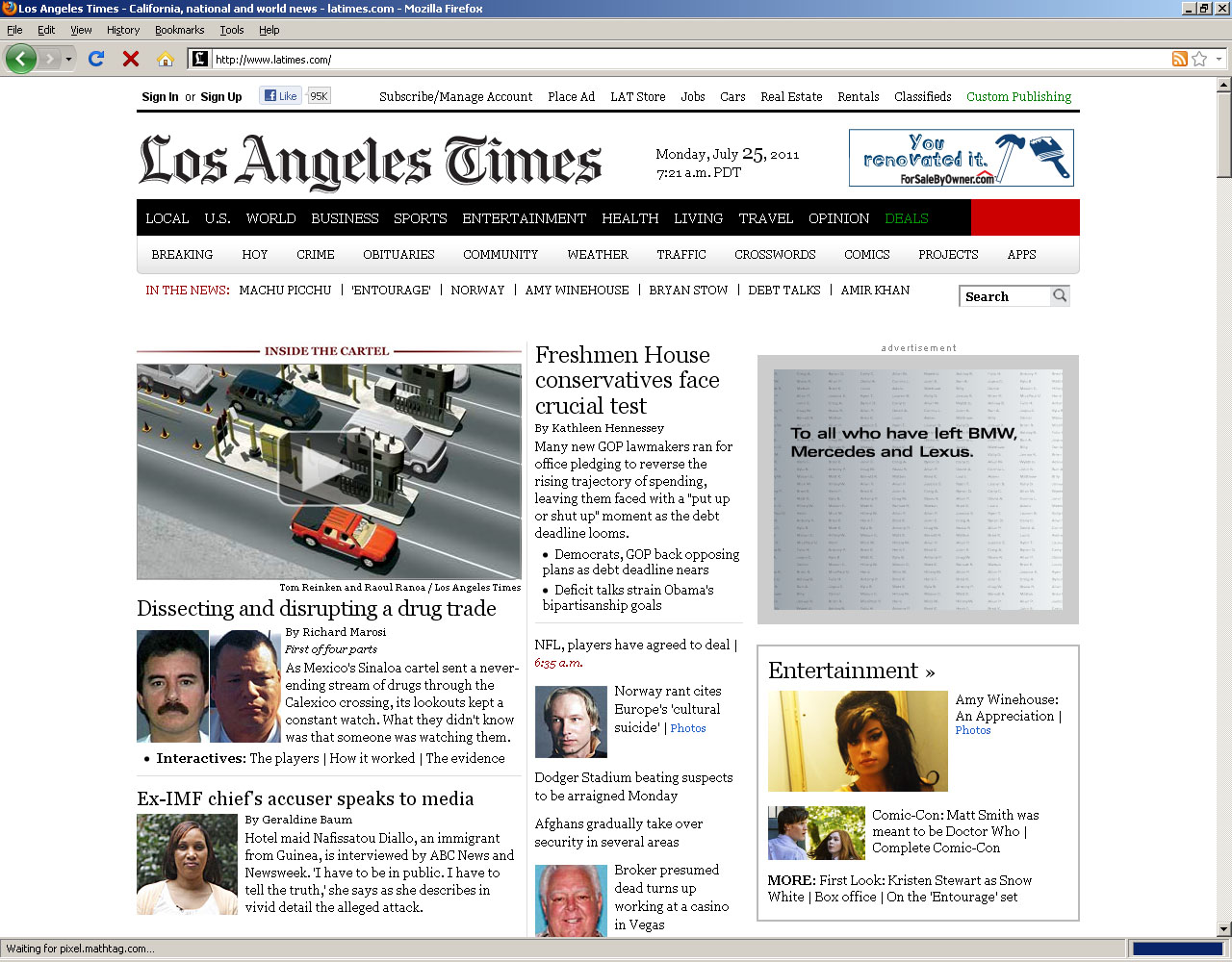 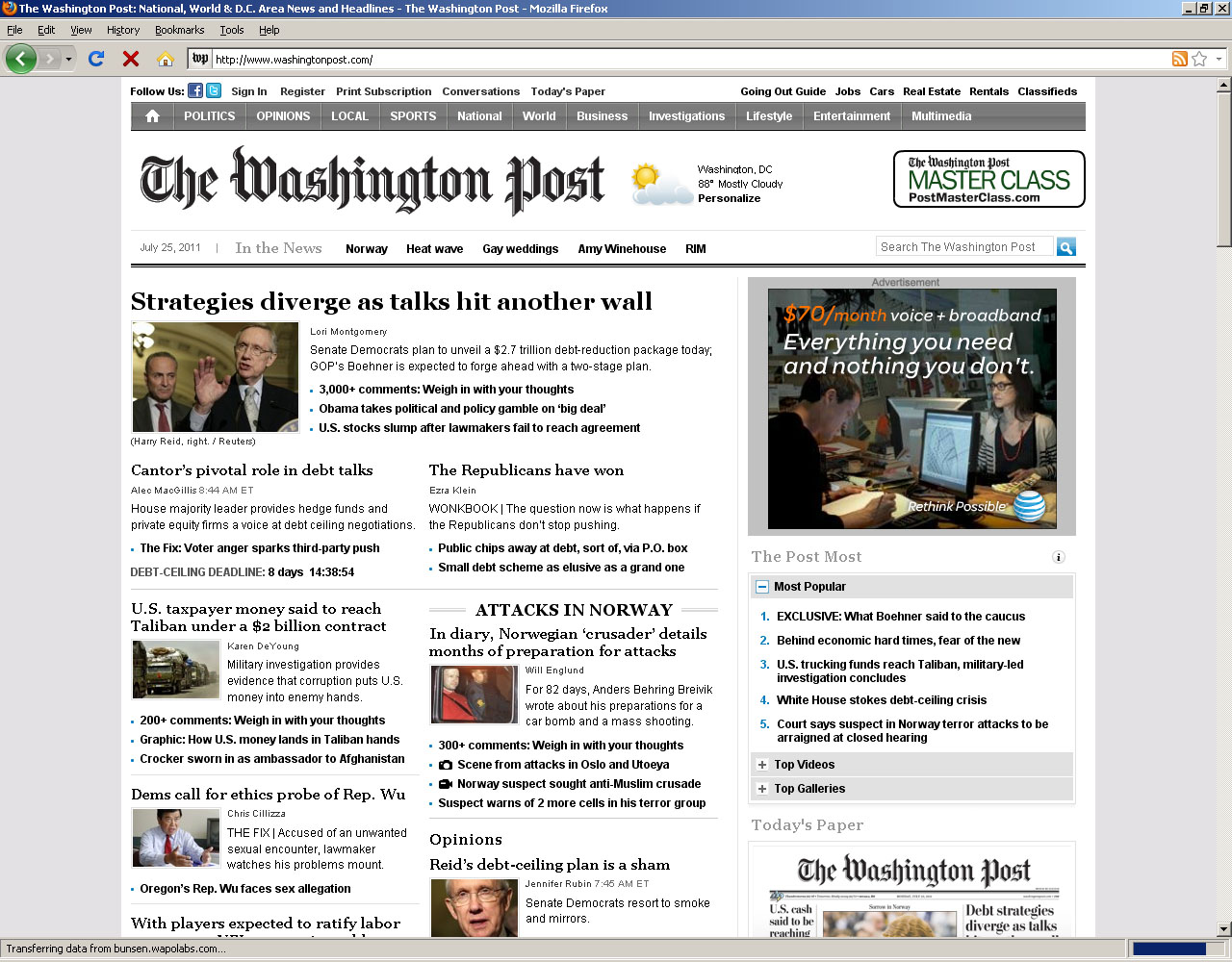 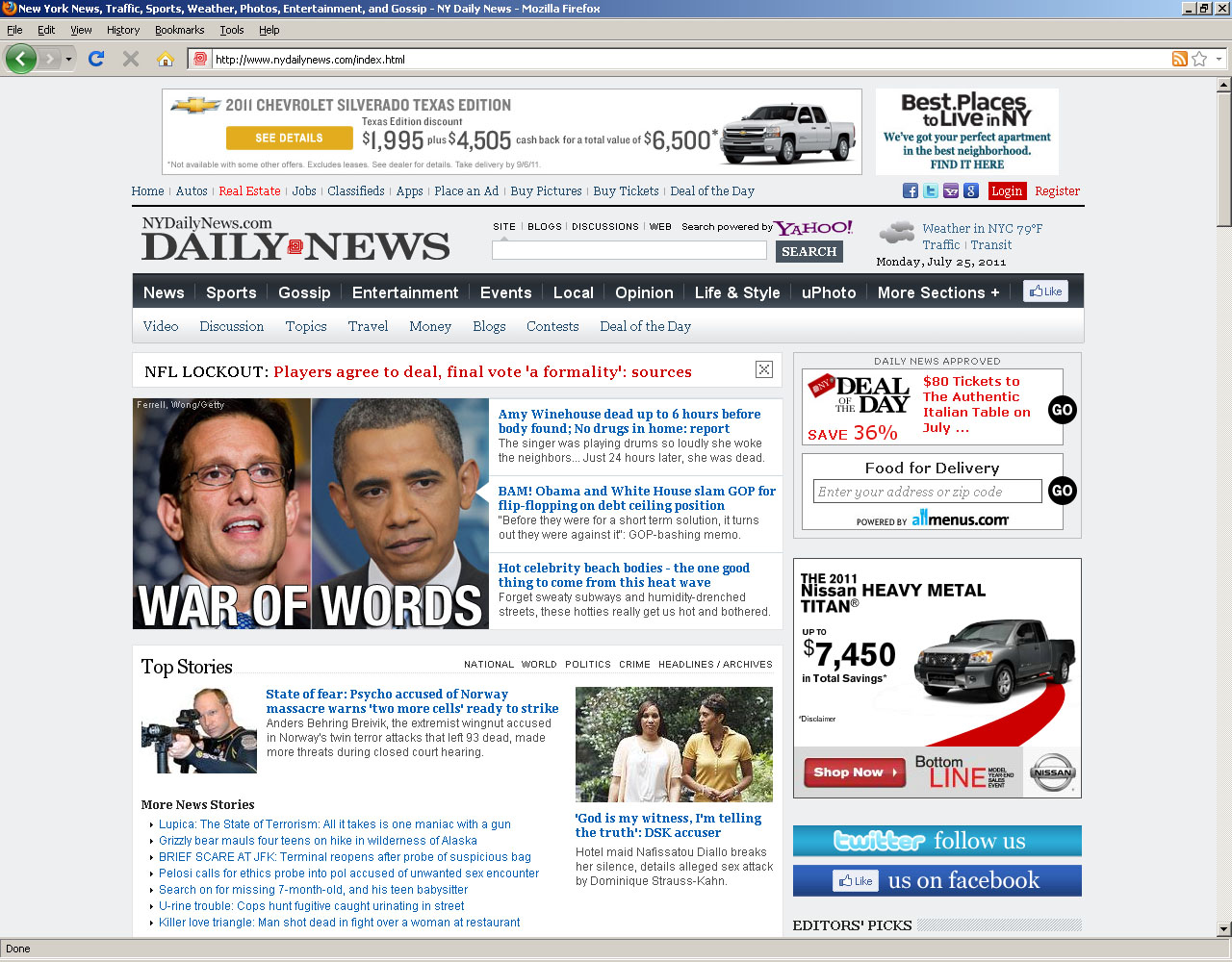 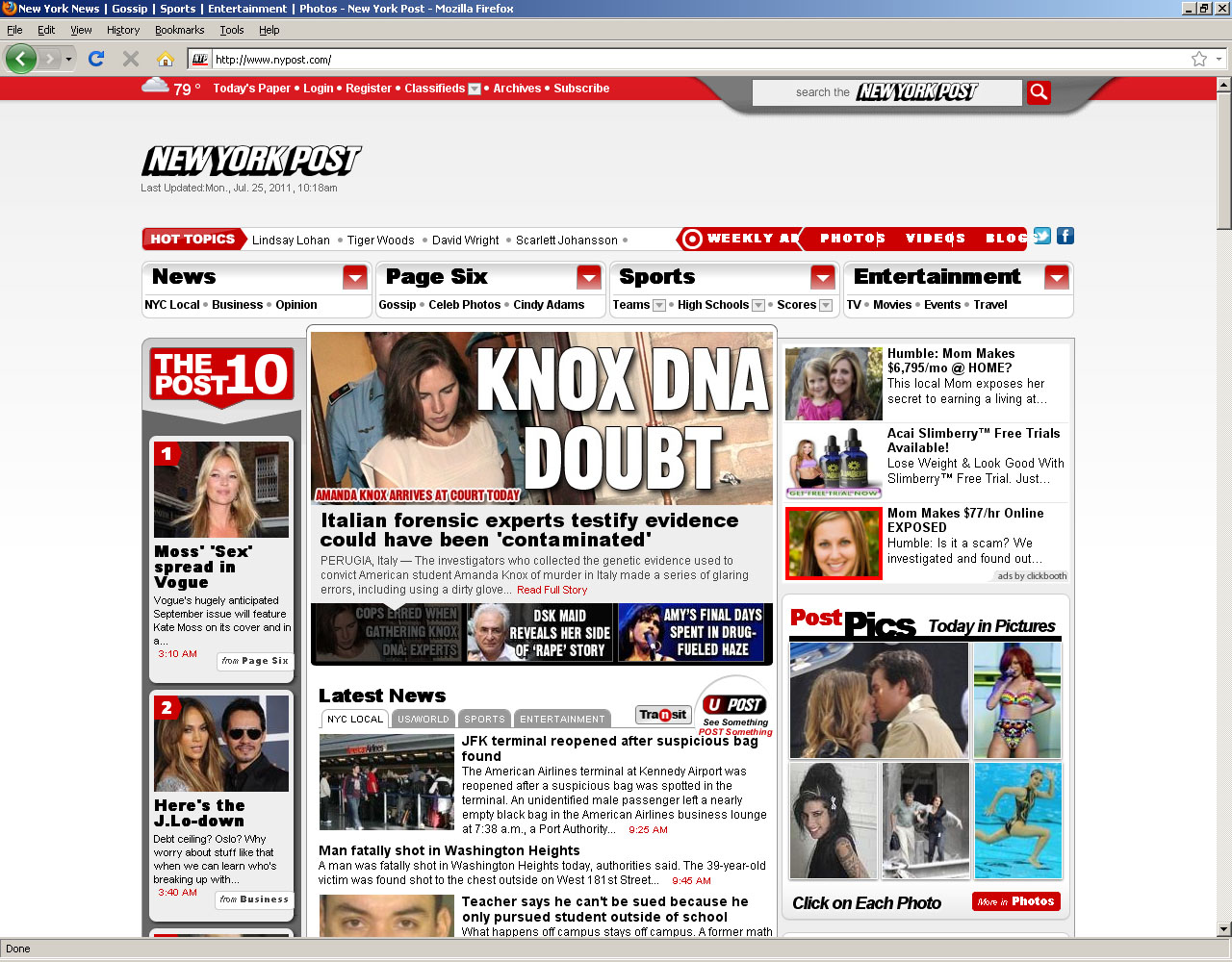 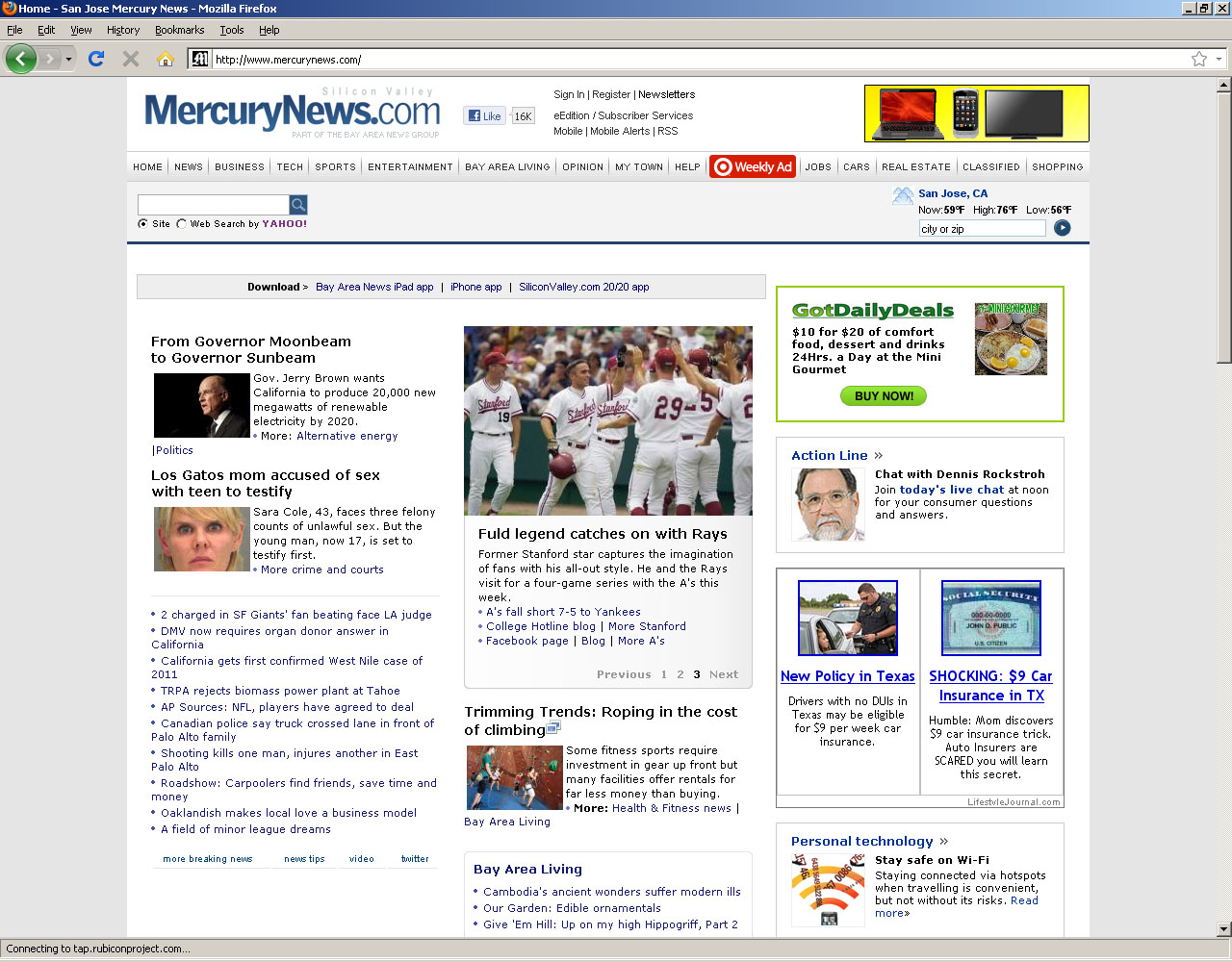 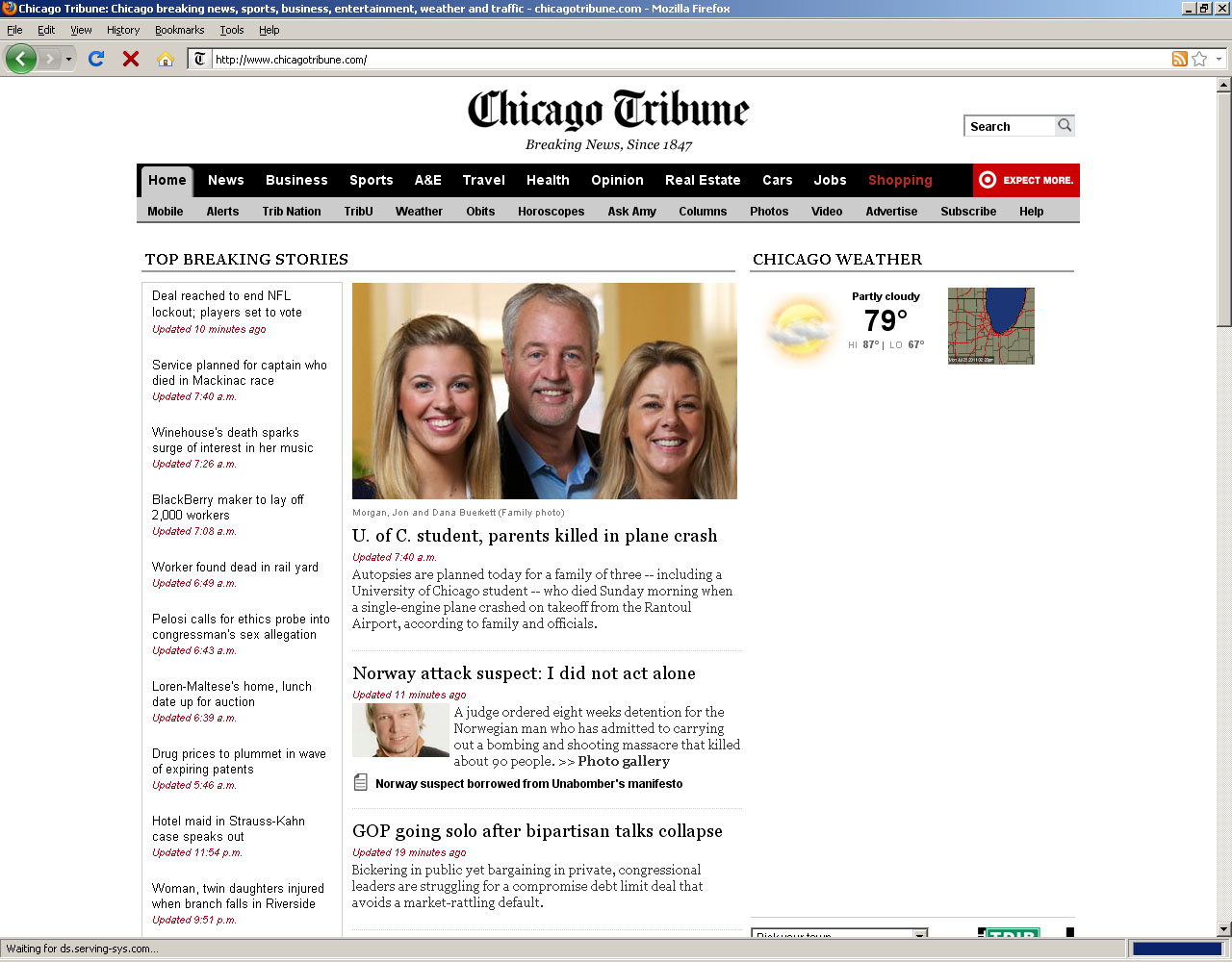 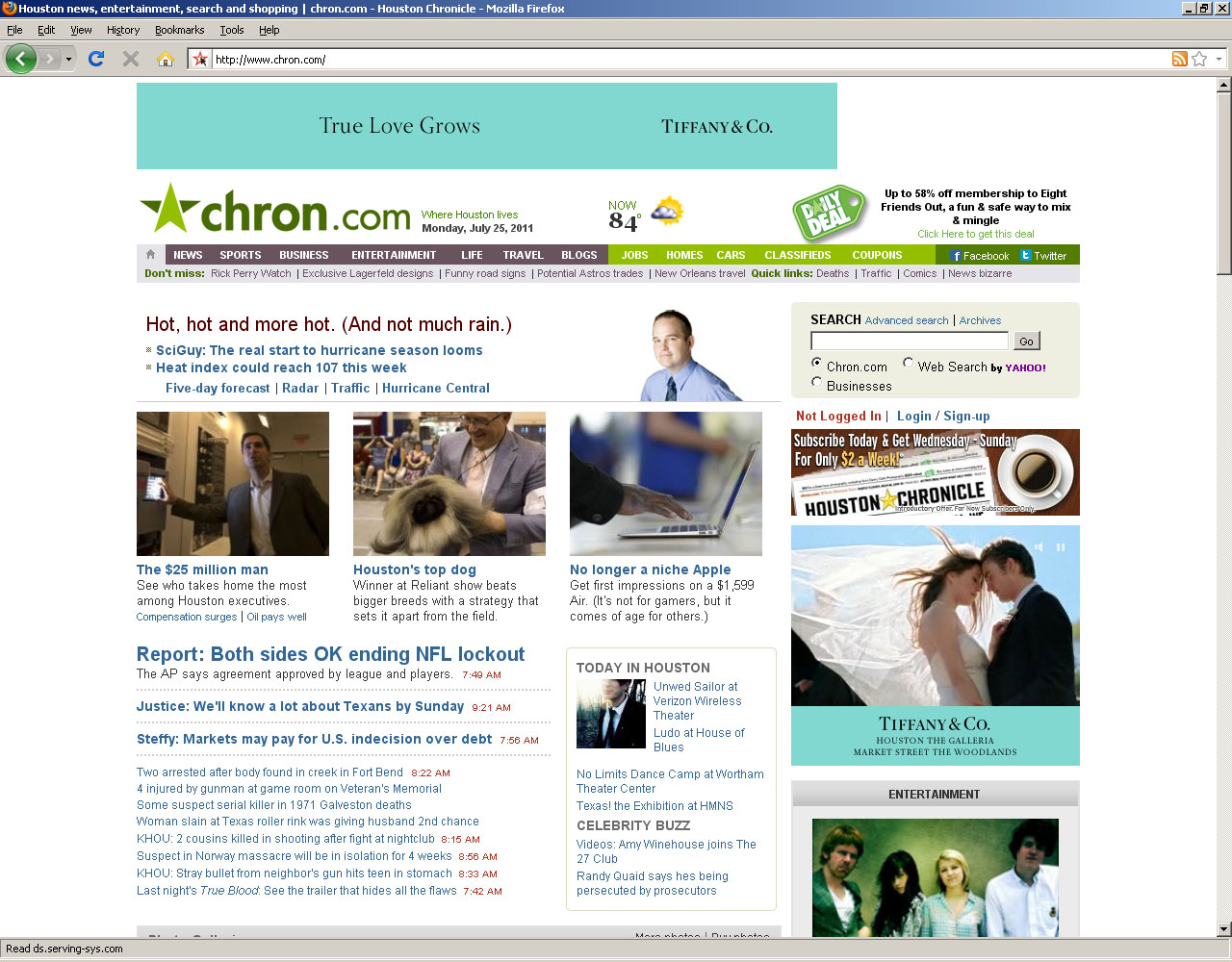 8/10 still raging on about it 72 hours after the event, in a country that normally gets ignored by the US press, at a time when celebrity news (Amy Winehouse) is exploding across the airwaves. What were you saying again, Glenn?