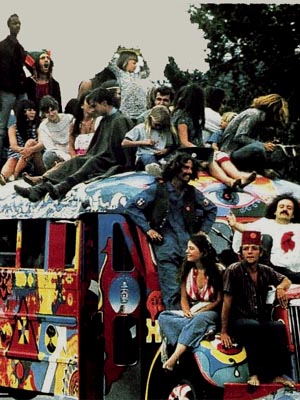 Hypocrisy is the condition of assuming you could not be guilty of something, even as you criticize it in others.

It is inherent to the human condition: in the movie of our lives, we are the camera, and never see ourselves unless we point the camera into a mirror. We try to control hypocrisy with introspection.

A whole society however is many individuals, and so it is easy for that society to become fragmented, and for one group of individuals to notice its hypocrisy, but be ignored because they are not seen as representing the whole society.

For example, when Galileo criticized geocentric orbital models in favor of his heliocentric model, he was pointing out a human hypocrisy. Half of those around him refused to recognize their own error; the other half blamed others for it.

Modern time invites massacres because our hypocrisy is denying all mention of fundamental flaws in the design of our civilization.

You can criticize anything, literally, except liberal democracy and its fusion of individual equality, consumerism and leftist politics. Anything resembling a right-wing view is required to be dumbed-down and have its “controversial” parts removed before it can be spoken in public.

The illusion that people like to project is that all of us agree that some things are true and other things — well, they’re either wrong or bad, or both, but if you speak of them, you’re not a nice person. You’re one of those people who wants to ruin the party.

It reminds me of this:

And when it is all over with the human intellect, nothing will have happened. For this intellect has no additional mission which would lead it beyond human life. Rather, it is human, and only its possessor and begetter takes it so solemnly — as though the world’s axis turned within it. But if we could communicate with a gnat, we would learn that he likewise flies through the air with the same solemnity, that he feels the flying center of the universe within himself. There is nothing so reprehensible and unimportant in nature that it would not immediately swell up like a balloon at the slightest puff of this power of knowing. – F. Nietzsche, On Truth and Lies in an Extra-Moral Sense

Our “knowing” is our undoing. We have decided to make a little world in our own heads, and compel others to participate through socialization, and we declare this the Official Reality and deny anything outside of it. Our social buddies will back us up, and like a lynch mob, attack anyone who deviates.

For this reason it’s not surprising that few scientists, politicians, entertainers, lawyers, doctors or even footmen will publicly stand up for the right. To do so, unless you adopt the neutered mainstream right, is career suicide. You will be ostracized and subject to negative peer pressure.

The liberal revolutions of 1789, which finally took over in 1968 with the rise of our most aimless generation, have declared that they alone know what is true — and they are going to smother, censor, heckle, exclude, mock, degrade, coerce and erode any other viewpoint. It is total intolerance.

It is not surprising then that we are in what Vaclav Havel calls a “post-totalitarian” system. Gone is the ranting tyrant; in his place is the common person who wants to be more than common, so he adopts attitudes and “knowing” that he thinks makes him seem smart. He uses these to suppress others. It is total control.

Slowly, some are breaking the taboo line and daring to speak that which the liberal elite establishment fears they will speak:

But some commentators argue that despite his deplorable methods, Mr. Breivik has a point: “Multiculturalism” has failed and Europe should turn back toward the narrower, traditional national cultures of the region.

Breivik â€“ a self-described Christian nationalist opposed to the “Islamic colonization” of Europe abetted by mainstream European politicians (“a corrupt class of abject traitors”) â€“ argues that modern Europeans have been “indoctrinated” by a “multicultural orthodoxy.”

Both Bawer and Breivik appear to be of the belief that members of the European political elite are ignoring general public opposition to immigration and a growing threat to nations like Norway. – Christian Science Monitor

Our society can never handle its critics. It has one method of silencing them that we’re all familiar with; we saw it on the playgrounds of our kindergartens:

“No one will like you if you do that. You’ll be one of the uncool kids! What a loser!”

Does it really come down to this? After billions of hours of education, miles of ink, thousands of studies, hundreds of philosophers… we’re still the vaguely chimpanzee-like creatures using peer pressure to exclude those who know things we don’t understand.

When you deny honest impulses to truth, you create monsters. They know that the crowd will muffle their cries and deny their truth. Eventually, they snap.

And now we have Anders Behring Breivik saying essentially the same thing: leftism is the underconfidence of the herd, it creates a society of idiots, we are afraid of the truth, conservative orders like nationalism and religiosity are better values, we have ruined the family, our insistence on equality leads us to insanity, and other ideas rejecting the modern liberal-democratic-consumerist society.

We made this man a monster. Yes, he is accountable for his actions; we all are. You expect an obligatory “and his actions were terrible” here to show you that I’m as neutered as you. Whatever we think of his actions, this wasn’t the standard selfish criminal or mass murder. This was a political protest designed to bring focus to — to advertise — his ideas and manifesto. This was like the other shootings a way of saying “I’m not going to take it anymore. You won’t listen and now I’m ready to fight.”

As another source says:

Wow, another madman with a sensible manifesto. Another completely rational, intelligent man driven to murderous insanity. And once again, society has zero introspection in regards to its profound ability to turn thoughtful men into lunatic butchers. If you want proof of Breivikâ€™s lucidity, peruse his absurdly long manifesto, â€œ2083: A European Declaration of Independenceâ€ (at Counter-Currents Publishing, via Kevin Slaughter â€“ Iâ€™d upload a copy to IMFâ€™s servers, but the manifestoâ€™s size exceeds the maximum allowed), which is poorly edited and rambling but otherwise a scarily accurate summation of alt-right thought â€“ hence why the alt-right has been either ignoring the Norway story or rushing to dissociate themselves from him.

Hereâ€™s an idea â€“ sick societies produce sick individuals who do sick things. Anders Breivik murdered nearly a hundred teens (not children, TEENS â€“ they were at a summer camp for young adults) and must pay the price, but the blood of those teens is ultimately on the hands of the society that spat him forth. He is the bastard son of a masochistic, degenerate, rootless world that pisses on its traditions and heritage to elevate perversity, mindless consumerism and ethnic self-hatred to the highest of virtues. And as we lumber forward in our journey to the end of the night, the body counts are just going to keep rising until the problem is solved. – In Mala Fide

Our civilization is dying, and the number one symptom is denial.

In fact, our society isn’t moving toward anything at all. We claim we’re moving forward through “progress,” but we’re just spreading the wealth of the past around, not making more.

We claim equality is freedom, but what it really is seems to be denial of biology, a whole lot of social chaos, and then endless regulations to follow which are designed to humble us and make us obedient.

Our moral righteousness kick is spurred on by our victory in WWII and the Cold War, yet our societies are clearly rotting from within. Ghettos blight the cities, vandalism covers everything, our architecture and products are disposable, craftsmanship is just about totally dead, and our airwaves are dominated by talking heads without an original thought.

We consider dumbing down complex ideas to be a saintly process. We like to pretend that all of our fellow citizens can understand weighty concepts in politics, etc. when we know from experience that most people can barely feed themselves.

Equality drags us down because it is a denial of reality.

And when a tragedy happens? Well, let’s have another helping of denial of reality, please!

Mr. Stoltenberg repeated his call to defy the terroristâ€™s anti-immigration and anti-multiculturalism rage by reinforcing those very values: â€œOur answer is more democracy, more openness, and more humanity â€“ – but never naivety,â€ he told the congregation.

Norwegians, who are heavily involved in international affairs, NATO military operations and United Nations peacekeeping missions, have had lengthy national debates about threats from the outside world, but very little discussion of the small but influential circles of intolerance within their own anti-immigrant right.

â€œWe havenâ€™t really paid attention to that kind of extremism â€“ – as in most of Europe, we had our share of neo-Nazis and those kinds of groupings in the â€˜80s and â€˜90s, but this kind of anti-immigrant politics was a fringe phenomenon,â€ said Heidi Skjeseth, a journalist with Osloâ€™s Dagsavisen newspaper. â€œNow this is an Oklahoma bombing moment â€“ – people are starting to say that the police and the media should have paid more attention to home grown extremism.â€

Police and politicians vowed to investigate a movement whose supporters range from authors of popular books on â€œEurabiaâ€ and â€œthe Muslim tideâ€ to more violent figures like Mr. Brievik who also appear to have ties to little-known extreme-right groups. At the same time, officials vowed not to let this investigation interfere with Norwayâ€™s legendary openness.

If you wonder why people shoot up your society, it is because you are oblivious to truth and derive some perverse sense of power by turning your back on the truth. You feel like you are kings because you have in your minds the ability to deny logic, truth and the evident consequences of your actions.

This society of equality has become an inversion, in which the stupid are empowered to live a lie and the rest must pay the price. It’s a Pareto principle: 20% of the population produces 80% of the problems, and the rest of us sit around hog-tied by “tolerance” and “equality” and can’t say anything about it.

The rage builds under the skin. Look for more events of this type in the future. As for me, I’m tired of giving service to the boilerplat “oh isn’t this terrible.” If that’s the kind of sentiment you want, get away from me — you’re an idiot. I’m more interested in the cause of our breakdown, and how to fix it.

Complacency | A tale of two realities