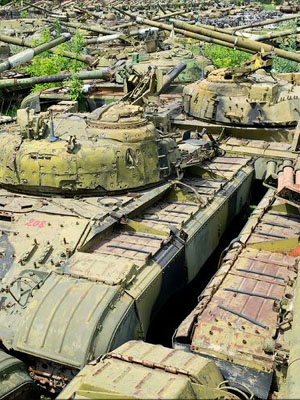 Whenever you find yourself wondering what the next big thing will be, look at what everyone else is saying, find its dead center, and then look to the opposite.

The majority of media since 1991 has been emphasizing a new world order in which there are no superpower enemies, all countries participate, and we all dedicate ourselves toward bringing the wonders of democracy and economic freedom (consumerism, welfare) to people worldwide so that we can all be equal.

It is said that this augurs a new age in which there is no war, only commerce, and there are no divisions like class, race and gender, only people who are like good buddies independent of national boundaries.

Directly opposing this would be a much more recurrent idea, which is that humans don’t ever really change in their inner substance, thus despite the change of ages in history, the same Machiavellian tasks remain. Someone must rule the rest and the others will try to overthrow that ruler.

While the West has been engaging in a simultaneously mutual celebration of the lack of strife, and misery from lack of purpose from lack of challenge beyond our attend-jobs-go-shopping lifestyles, an old Machiavellian has returned. The Cold War is back.

Naturally this conflict is older than the Cold War we knew from the 1950s-1990s. Europe through Siberia is one contiguous landmass, and one group will rule it. Will it be far-east Asians, like China or Japan? Middle Easterns, like Israel or Iran? Caucasian-Asians like India? Or Eurasians, like Eastern Europe? Only one can rule and whoever does will form the next world order.

Right now the rulers of the world are a tripartite formed of the USA, UK and Western Europe. Under this peace, technology has expanded and personal freedoms have been at an all-time high. Whether these are worthy goals in themselves, they have avoided the destructive endgame that communism promised when it began threatening the world after its evolution barely a century after the French Revolution mainstreamed liberalism in Europe.

The rising order that challenges this will be formed, as it would be in a high school, of an alliance between those who are not in control. This alliance will be disposable in that each participant will intend to keep the accord for as long as is convenient, then make a move for its own dominance. Much as in the early days of WWII, when Russia and Germany formed an uneasy alliance, today Russia and China have formed a bloc much as they did in the 1960s. History repeats itself on two levels.

Shaping up to be the Western alliance versus the Eastern axis, the new Cold War involves a good deal of saber-rattling as the Russian-Chinese war machine solidifies its relationship. In the meantime, the USA is holding Russia at bay with threats of a missile shield in Western Europe, which would prevent a Russian invasion because retaliation could be one-sided. Russia and China are threatening proxy wars in Syria and Pakistan. Russia has threatened the West with nuclear warfare if these proxy disputes heat up, while saber rattling both economically and militarily against Europe and its largest power, Germany.

These are just some signs of the conflict to come. The usual “useful idiots” in the West will be nattering on about how this is avoidable, how we all bleed red and we are all one, and how the Russians love their children too. While all those are true, it is also true that only one — Asia, the Middle East, Eurasia or Europe — can rule the Euro-Siberian landmass. Much as our personalities are genetic, the national characters of these different places are hard-wired as well, and thus so is the incompatibility. One will need to beat out the others for control, and that one will rule those others and shape their destinies.