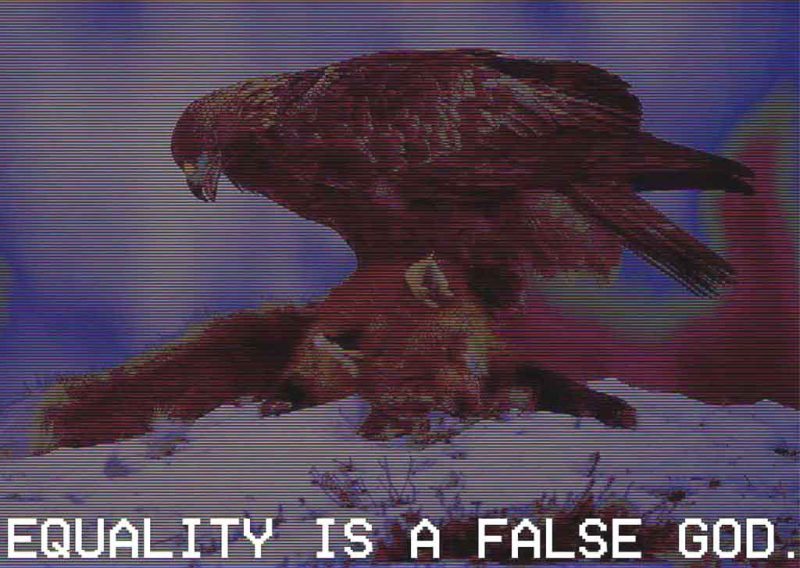 When we look back through history, it becomes clear that societies have always died by class warfare. A new society values competence, and so those people rule it, but once it is established, clever humans assume that it will exist in perpetuity without effort, and so it begins to decay.

Those clever humans always phrase their argument around “equality,” or the notion that it is unfair that some are simply turnip-picking labor whose opinions, thoughts, and self-expression do not matter. They demand that social hierarchy be abolished so that these people are equal (also).

However, their demand comprises equal parts arrogance and pretense because it denies reality. Some are born to higher IQs than others; this happens in hierarchies, where everyone reaches a rank based on ability, and this pushes competence to the top.

Equality, on the other hand, suppresses competence in order to make the less competent feel “equal.” When you look at it this way, the kindergarten level of Leftist arguments becomes clear. These people deny reality beyond surface appearances in a world of human social and emotional measures only.

Ignoring for a minute the bigger question of whether this means that Leftists are mental defectives who need to be shipped to Venezuela and have their citizenship records deleted here, this means that we are casting pearls before swine to argue with the Left. They are incoherent; nothing we say can or will convince them.

In their simplistic view, we should strive to eliminate conflict by evenly distributing wealth, power, and social status. This requires us to think that conflict always arises from unfairness, when in fact conflict arises for many reasons.

This conceals what they actually intend, which is to take over society from those above them. Remembering the iron rule — all things (including: ideas, people, groups) act only in their own self-interest alone — we can see how the lower classes, when they think they no longer need the upper classes, will overthrow those and then promptly self-destruct because of an inability to make the complex decisions needed to create, further, and nurture society.

In turn that tells us that societies reach a danger zone after developing enough to have consistent nutrition and water, but before having enough technology to automate away the roles of the proles and therefore, to remove their lower classes, who otherwise will revolt.

Class warfare of this nature worked in the West mainly because we were busy with various wars. First the Avars, then the Muslim invasions, then the Mongol invasions, finally religious wars, and then ideological wars. In each one, the proles got stronger while the higher echelon leadership classes became more exhausted (and suffered disproportionate casualties).

We are now several centuries into the results of class warfare, which is rule by proles, and it has proven exactly as incompetent as intelligent people warned it would be. Proles focus on appearance and the acceptance of others, and so crusade after symbolic issues while ignoring real ones.

For the Right, as we move into the future, it becomes imperative that we discard the equality rhetoric that denies the ongoing class warfare. We believe in conserving the best results of all time, and that includes hierarchy, which means several things including awareness of social class.

Proles having power makes it impossible to government well. Their votes can be bought with “free” stuff that others pay for, they are easily led to war if they think it will be a victory, and they ignore any problems that they do not understand, which means basically everything.

Politicians specialize in pandering the blue collar, minority underclass, and impoverished urban votes. These groups can be easily flattered with symbolic acts like wearing blue jeans or drinking beers, so they are a danger to any semblance of sanity in our system.

We are moving beyond democracy as a species, since it has yet again wrecked a prosperous civilization. For the next, we need to also become class-aware, and make sure that we subjugate, oppress, repress, censor, dominate, and disenfranchise the lower classes.

Otherwise, we are simply bleating the idea of the Left: “equality,” specifically the notion that lower social classes are equal to higher.

Currently too many proles are present among our upper classes, but this is easily fixed. The old Anglo-American hereditary natural aristocracy had no such problems because they could recognize one another. Bring them back, and we can exclude the usurpers and pretenders.

On a broader level, we need to recognize that morality and natural selection are one. That is, we benefit from having competent people in power, and that needs to become how we select those who get into power, even if they are unpopular or socially awkward.

In social class, this competence occurs through both natural intelligence and character, which means moral and aesthetic instincts. Any idiot can memorize moral rules; someone with actual moral balance always finds approximately the right thing to do, even if it takes awhile to suss it out.

Diversity of other races has obviously failed, as has having ethnic mixtures of the same race. However, class-mixing is destructive as well, since it destroys natural selection and ensures that the incompetent will gain power. To avoid this, we on the Right must become class-aware.