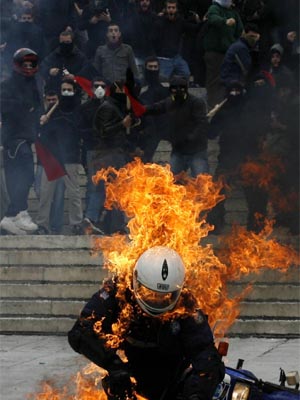 Just about any issue you encounter in the modern world can be separated according to the salesperson model. There is a surface layer, in which broad positive assertions are made, and after that an underlying experience layer, in which you figure out the more complex truth.

When you go to a store and see the new dishwasher on sale, promises are made: it cleans more efficiently, it is whisper-quiet, you can fit more stuff into it. When you get it home and use it over the next year, you find out the limitations: it still uses a ton of water, whisper-quiet is relative to a jet plane, and some of the stuff you can fit into it doesn’t get cleaned. Sales pitches do not equate to reality although they purport to do so.

In the same way, all political discourse splits into two threads. The first is how it will work out in the complex interaction between finance, politics and social factors; the second is how you spin it to the voters in a 30-second sound bite on the local news. The two are often completely divergent because the demands of political situations rarely fit into half-minute explanations at a fifth-grade reading level.

The real problem with this situation is that once we tell these pleasant lies, and as grotesque oversimplifications they are that, they snowball as people “trust” them to be literal interpretations. As a result, we quickly reverse course from truth-seeking to myth-building.

One such example is class warfare. Here’s the official story, which is official because it’s the most popular with the widest segment of our population:

Conservative social scientists argue that income inequality is mainly the result of more workers in the average household and their age and education, and that the disappearance of the middle class is more statistical than real.[4] In a 2004 poll of 1,000 economists (from the AEA), a majority of polled economists favored “redistribution”. Note that in voting, the majority of respondents were of the Democratic ideology (Democratic:Republican ratio of 2.5 to 1.) [5] A study by the Southern Economic Journal found that “71 percent of American economists believe the distribution of income in the US should be more equal, and 81 percent feel that the redistribution of income is a legitimate role for government.”[6] One social scientist argues that without holding education, experience and industry constant, inferences to inequality are mere guesses.[7] – Wikipedia

For an even more dramatic view, you can feed into the burn-the-witch-err-the-rich view:

The upper 1 percent of Americans are now taking in nearly a quarter of the nationâ€™s income every year. In terms of wealth rather than income, the top 1 percent control 40 percent. Their lot in life has improved considerably. Twenty-five years ago, the corresponding figures were 12 percent and 33 percent. One response might be to celebrate the ingenuity and drive that brought good fortune to these people, and to contend that a rising tide lifts all boats. That response would be misguided. While the top 1 percent have seen their incomes rise 18 percent over the past decade, those in the middle have actually seen their incomes fall. For men with only high-school degrees, the decline has been precipitousâ€”12 percent in the last quarter-century alone. All the growth in recent decadesâ€”and moreâ€”has gone to those at the top. In terms of income equality, America lags behind any country in the old, ossified Europe that President George W. Bush used to deride. – Vanity Fair

Why do so many economists, journalists and others think that wealth redistribution is a good idea?

It’s the dominant media myth: that we’re experiencing class war from the top down.

In fact, if we look at the layer beneath the sales job, we will see that the reverse is true.

Throughout history, societies have collapsed because of class war, true — but class war from the bottom upward.

What kind of war is this? Demographic warfare.

The official narrative is that the poor/unskilled are persecuted by the rich. The truth, if we look at broader history, is that the poor/unskilled overwhelmed the ability of that society to produce wealth. The root of class warfare is overpopulation from the bottom, and because they won’t blame themselves, they blame “the rich” which becomes a broad brush to target anyone with more than subsistence income.

Naturally, this has dire implications for democracy. What is the point in having universal voter participation if each idea to be voted upon is in fact a sales job? The myth of the “informed voter” dissolves when we look at how little of the situation is actually conveyed, and how a stalemate would occur if we tried to tell the voters the truth. Politics becomes a stage-play after which the actors scurry home and get real work done.

Even worse is the fact that we’re thinking in reverse. We blame people for being rich, since we assume that the rich are waging class warfare against the poor. As a result, we ignore the fact that people who got wealthier legitimately — professionals (doctors, lawyers, architects, MBAs) and small-business owners or managers — did so because of raw cognitive ability:

Even assuming that, there are massive advantages inherent simply in being born rich (and disadvantages in being poor.) My favorite example, simply because it’s so dramatic, is that a child born into the lowest-earning quintile who manages to attain a college degree is less likely to be in the highest-earning quintile than a child born into the top quintile who does not attain a college degree. This is all the more remarkable when you consider that making it to, and through, college is far harder for poor kids than rich kids even at a given level of aptitude. (Two thirds of the kids with average math scores and low-income parents do not attend college, while almost two-thirds of high-income kids with average math scores do.) – TNR

Even reducing all other factors, what we’re seeing here is that those who are more prosperous tend to be more intelligent.

Not all of them, of course, but statistically, most of them.

This is why books like The Bell Curve freak people out. Sure, there’s that troublesome chapter 13 about race — but even more, there’s the problematic idea that our native abilities determine what we should be doing in life.

When you look at people who got rich for trivial acts, like entertainers or those who sold venal products like liquor to the masses, you’re not seeing the best of society rising. You’re seeing a champion of the unskilled dominating other unskilled through their own incompetence at choosing art over trashy entertainment, or quality liquor over gut-rot.

We love to subsidize the unskilled, and pretend that by raising their income, we somehow make them as intelligent, morally balanced and insightful as the founders who persist in our professional classes:

Today in America there are nearly twice as many people working for the government (22.5 million) than in all of manufacturing (11.5 million). This is an almost exact reversal of the situation in 1960, when there were 15 million workers in manufacturing and 8.7 million collecting a paycheck from the government.

It gets worse. More Americans work for the government than work in construction, farming, fishing, forestry, manufacturing, mining and utilities combined. We have moved decisively from a nation of makers to a nation of takers. Nearly half of the $2.2 trillion cost of state and local governments is the $1 trillion-a-year tab for pay and benefits of state and local employees. Is it any wonder that so many states and cities cannot pay their bills? – WSJ

Our budget in the United States is divided roughly in two. On one side are military and infrastructure costs; on the other, equivalent in dollar value, are entitlements and resulting government costs.

Conservatives want to end war by ending subsidies. This stops the reckless proliferation of the unskilled and preserves the founder class. If you want your country to avoid falling into third-world status, this is your only option.

Liberals want the unskilled to win the class war through wealth redistribution. The idea underlying this is that if uniformity is established, and equality imposed, there will be no cause for conflict. Sadly for liberals, it doesn’t work that way — when equality is established, even more vicious internal fighting results as some try to climb above the rest.

In the process of trying to reach that equality, civilizations and lives are destroyed en masse:

We live in an era of ethnic, national, and religious fratricide. A new two-volume reference work on “the most severe civil wars since World War II” has 41 entries, from Afghanistan and Algeria to Yemen and Zimbabwe. Over the last 50 years, the number of casualties of intrastate conflicts is roughly five times that of interstate wars. The number of refugees from these conflicts similarly dwarfs those from traditional state-versus-state wars. “Cases such as Afghanistan, Somalia, and Lebanon testify to the economic devastation that civil wars can produce,” note two political scientists. By the indexes of deaths, numbers of refugees, and extent of destruction, they conclude that “civil war has been a far greater scourge than interstate war” in recent decades. In Iraq todayâ€”putting aside blame and causeâ€”more Iraqis are killed by their countrymen than by the American military. – Chronicle for Higher Education

What is the source of our failing as a human species?

Much of the history of the 20th century has resulted from political jockeying to evade this problem. It didn’t work; the problem persists.

And what happens to nations where the unskilled predominate?

Prole behaviour is invariably guided by poor impulse control, and subsequently, their lack of foresight.

This compounds my theory about low IQ people having high testosterone, and therefore poor impulse control and everything else that entails, like breeding more. Obesity and addiction problems are also symptomatic of proles, which can be partially explained by other factors, but when it comes down to it: they are guided purely by caprice and appetite and those very issues engender prole problems. – Sofiastry

Whether we call them proles, drones, unskilled or poor, the reality remains the same: people differ in intelligence and character, and those at the lower end of the scale wind up in less-essential positions with less wealth.

While we may want to treat them well (most of us want to treat everyone well) we also have to look at the implications of their predominance in society. Sofia’s description above is as apt as any: lower-IQ and higher testosterone equals low impulse control, low systematic/planning, a certain amount of opportunism and socialized cost.

This offends the public eye, composed equally of guilt-ridden middle-class people and the burnt-out unskilled, which thinks it is “elitist” to notice differences in ability and to deviate from our Soviet-style insistence that all are equal.

However, that pathway leads only to the one kind of class warfare that does exist, which is the unskilled destroying the founders and thus, by killing off the intelligence their society needs, plunging it into darkness.

Voiceless | The scourge of Christianity