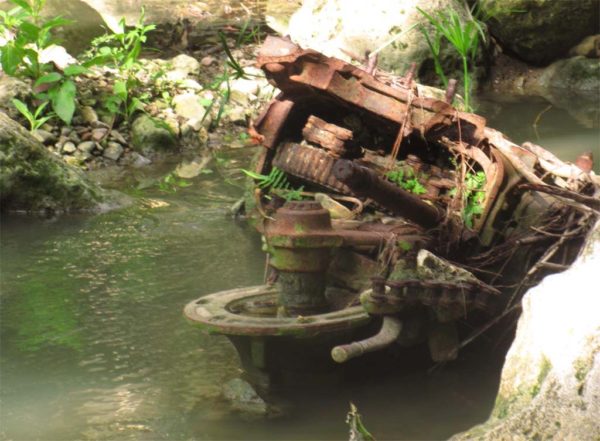 Civilizations run like machines, as most organizations do. Individuals have roles with inputs and outputs, and these mesh and interweave to create a cycle of life which keeps the engine going.

The term â€œcivilization engineâ€ was described in the book A Whole Which is Greater, in which a distinction was made between Utopianism and Eutopianism. A society which is Utopian requires a controlling authority, where a Eutopian society exists in balance with the natural world around it.

It describes this distinction partially correctly:

We might even say that the â€œcivilizational engineâ€ with its dominant image (and energy) of aristocratic prerogative, is in process of slamming into the wall of ecological limitation and environmental capacity, with millions upon millions of folk casualties in its wake, not to speak of all the ecological mayhem and species extinctions.

We need both a deepening of Eutopian democracy and a shriveling of utopian â€œdemocracyâ€. That is the point we have reached.

A patriciate is a class of nobility or those who act like them. The above analysis falls short for that reason, because you can have a good leadership group or a bad one, depending on whether they are motivated by external factors such as the good of society as an organic whole and balance with nature, or whether they exist only to perpetuate their own power as the expense of those other factors.

Reading more broadly into the idea revealed, the engine in an organization is the part where force multiplication is achieved. One example is the System Engineering Department in an Aerospace company. The company may have 10,000 employees but only forty System Engineers, and yet those few engineers direct the others to be more efficient than they could be with three times their number.

Another example is an Armyâ€™s Special Forces contingent amplifying the effect of the entire Army. Small groups of highly proficient warriors, utilized in surgical actions, avoid the need for a battle. Some would say that certain industries, like Silicon Valley, serve this role for the American economy, but perhaps it is merely the efficiency of computers that does so.

Since organizations are managed and thought of entities under the control of someone, it escapes logic (sometimes) that inside each organization there must be an engine that drives it. What makes an engine interesting is that it operates by itself as long as it is fed its inputs, much like a car engine will keep running so long as it is given gasoline, oil, electricity and air.

Engines rely on multiple factors, including the qualities and abilities of their personnel, and so each organization needs to â€œcreateâ€ its own engine based on personalities, culture, methodologies, tools etc. One example of how unique each engine is was visible in the failure to replicate Silicon Valley across the world.

The alternative is unfortunately also possible, which is that the â€œengineâ€ can make the organization collapse. The book referred to above describes one such scenario. It seems clear then that there are multiple engines: those that are dedicated to the organization are good engines, and those made for another purpose, which is necessarily different from the needs of the organization, are bad engines.

Recent history shows that the greatest generation worked hard and sacrificed for the greater good. During that time period America was not globally active and simply made a huge success of trading between its own States. The interests of the engine were aligned with those of the organic society around it, and so it was a good engine.

In a sense things changed when it became an Atlanticist global power. This change was effectively a change in law because the American Government was used to National Law and suddenly it adopted Admiralty Law without batting an eyelid. Essentially the spectre of corruption entered because business people and politicians realized that American law does not apply outside its borders, making it easy to secure illegal benefits.

This on its own would have been enough to change the engine that made America great. However, the point is not to find a culprit, but merely to find an avenue of thought towards finding how to change the engine back to positive again. Trump is moving in the right direction with the America First policy and although a lot of work needs to be done, a focus on the engine might expedite MAGA.

While he is doing this, the â€œotherâ€ engine busily works against Trump and the America First policy. Apart from the difficulty of finding and fixing the original engine, Trump must battle the bad bad engine. Like most solutions, his policy must be twofold, which is to increase rewards for the good and to raise costs for the bad.

What makes this book interesting is the phrase “a whole which is greater,â€ which refers to a systems engineering ideal of gestalt where â€œthe system is more than the sum of its parts.â€ This points towards the force multiplier effect: a force multiplier creates an exponential increase in efficiency and output, while a linear or algebraic increase adds units which have a fixed output increase.

The American bad engine only emerged in full view after the 2008 recession when Reserve Banks initiated Quantitative Easing. Do you remember in the â€œoldâ€ days when you needed money, that you would visit a Bank official, while conservatively dressed in a suit, where he/she would earnestly consider your application showing express interest in the security you could provide?

After 2008 that changed almost overnight. Bank officials dressed in pink t-shirts, and all customer-facing employees were changed to women.Â  Almost every loan proposal was cheerfully accepted because the banks feared that they would lose those clients to loan-sharks. Money became cheap to such an extent that one Reserve Bank went to negative rates, literally paying customers to borrow.

From a civilizational perspective the engine saw the opportunity to follow the drug addiction methodology. Just like a drug addict gets addicted causing him to steal his motherâ€™s purse in order to satisfy his desires, the new â€œengineâ€ saw an opportunity to drug humans with money by giving it to them for free, thereby causing them to become addicted to it.

Quantitative easing essentially broke the rule of â€œgoodâ€ money and turned it into bad money. This was a liberal idea because liberals have no limits and business directors are liberals wanting more and more profits every year. If it means turning other liberals into greedy druggies then thatâ€™s great for the Democrat Party, but not for America.

This bad engine fueled by the combination of greed and liberal mentality needs to be opposed by a stronger engine based on productivity directed toward the health of the nation. At the same time, the policies that support this bad behavior, and the illusions or political tropes that support them, need to encounter hard criticism which makes anyone using them appear to be the bad investment they are.

Most of us think of a society, like a corporation, as having leaders that command it to do what it does. In reality, leaders direct it after setting up functioning organs and institutions within it, and the most important of these is the good engine that generates actual productivity, which appears to be against the inclination of the average human being.

In this light, “America First!” is not just a slogan, but a moral statement that will synchronize that engine. We are not working for ourselves, for an ideology shared by the globalist world regime. Instead, we are acting so that the sum of our activity is greater than adding us all up as warm bodies performing rote tasks.

Naturally this will meet with a fair amount of opposition. Bad engines run because people, if not directed toward a goal beyond themselves, revert to doing what is convenient and profitable in the short term. But if Trump can achieve a sense of American unity, and the idea that we all benefit from the force multiplier if we work toward a purpose we share, he can make the good engine outpace the bad.

Where this gets interesting is that America is a thoroughly divided country, something the Founding Fathers anticipated when they designed it as a cascading power structure, with semi-autonomous states responsible to the federal government only in cases of shared interest in defense or monetary systems. For a good engine to form, people have to be working toward the same shared goal.

As the Alt Right reveals in its own theory, these shared goals are organic, or arising from the similarity between people. It seems there can be social factors to whether an engine is good or bad, and with diversity, people have no interest in the whole, and a contrary interest in taking from the whole and giving to their own particular group, like a more extreme version of the confederation of states it once was.

Perhaps our greatest revelation in the future will be that for us to have a good engine, we must be similar enough to be working toward the same purpose, and that this is more biological, cultural and moral than it is political, economic or legal. It may be that good engines only arise from our inner traits, and reliance on our external traits creates bad engines that then doom us to failure.