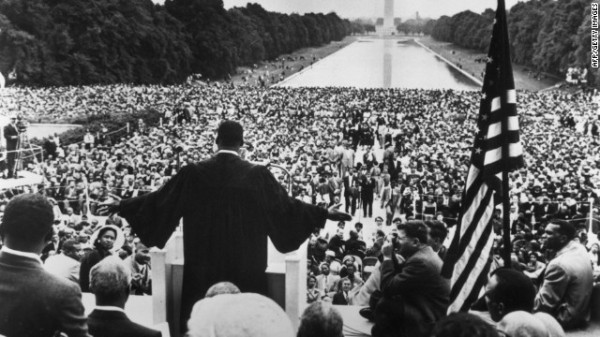 Civil rights fatigue hit America in the midst of the greatest victory of American-style civil rights: its African-American presidency.

Where twenty years ago disbelief in the fond vision of civil rights — that white and black could co-exist and “not be judged by the color of their skin but by the content of their character” — kept itself to the fringes, it has now found a place in mainstream media, signaling its presence in mainstream America.

Columnist John Blake writes in “Why I’m tired of hearing about ‘that’ civil rights movement”:

A lot of Americans just don’t want to hear about it anymore.

They find the subject dull or it makes them angry. Some African-Americans don’t want to hear stories about their parents getting hit upside the head while singing “We Shall Overcome.” And some whites don’t want to feel guilty.

The result? We treat the movement like broccoli: It’s good for us, we’re told, but we shove it aside on our plates when no one is looking.

The fatigue arises from the constant guilt projected onto European-Americans, but underneath that another bud waits to flower. This is disbelief of diversity itself. An in-depth analysis of diversity, or the system where multiple races co-exist in the same nation unified by an ideology of freedom and equality, suggests that it becomes quickly destructive to all groups involved.

Each person has a choice. They can choose their group, and be outsiders to the mainstream, or join what we are told is the “new mainstream” of a mixed-race group. But in combining cultures, the original culture is lost, and the buffet-style non-culture that remains exists only on a surface level or as highly stylized, pretentious social appearance. Those who join the mainstream lose who they are and become generic people with no identity except living in a place, having a job, and having hobbies. The only culture left for them is a mixture of television, government pamphlets, and whatever their social group finds fascinating at the moment.

People of any ethnic background who look at that generally say “no thank you.” Those who accept tend to be of one of two types: people who hate their origins and thus want to ensure their offspring do not resemble their ancestors, and those who are so socially motivated that they see opportunity in being part of the new in-group. Generally the latter are motivated by egalitarian ideology, make their living in administering the same ideology, or are media droids who find chasing trends to be fulfilling or something close enough to it.

The majority in America remains the Anglo-German substrate which forged this country out of a raw wild landscape populated by warring groups of pre-technological peoples. These are thinking that their ancestors did not fight and die in several wars, suffer through disease and privation, and dedicate their lives to building up this place to allow it to become a vast melting-pot which destroys all of those in it. The original idea of the melting-pot was that European descended cultures could take the best of each other. It became an excuse for the Brazilification of America, which will end much like Latin and Central America in poverty, corruption, disorder and insignificance.

Ancestors of this majority fought for the exact opposite, which was a new nation to take what Europe had done right and raise it even higher. Where they have made missteps if anything is in following the path Europe began with the EnlightenmentTM of placing the individual before civilization, before goals, and before natural law.

They are now seeing the end result of those poor choices, and the pendulum is (slowly… very slowly) swinging back.

In the meantime, guys like John Blake fear that their ticket into lucrative government and media jobs is dissolving, so they’re trying to re-invent it as a social movement that sounds like something we’ve heard before:

How many people know that the last campaign King planned was designed to fight income inequality and would utilize tactics later used by Occupy Wall Street?

For the “Poor People’s Campaign,” King planned to bring an interracial army of poor whites, Latinos, Native Americans and blacks to Washington to occupy the heart of the city and force leaders to do more for the growing number of poor.

Thomas Piketty, a French economist, is the author of a current mega-popular book called “Capital in the Twenty-First Century.” He argues that economic inequality is wired into the machinery of capitalism.

Let us be honest and call this what it is: Marxism.

The goal of the civil rights struggle reveals itself to be what it always was. Democrats, like their ancestors in the French Revolution, use mass popularity to subvert power structures and take over like parasitic worms in the brain of an infected rat. Their goal is power. Their method is giving people free things: freedom to obey no values system, equality through socialism, fraternity through forced interaction.

The Europe that American settlers fled was one which had turned its back on the idea of social order and instead substituted a desperate attempt to keep the unruly peasants under control. But once the gift-giving started, telling each individual that their desires were as right as the profoundest understanding of our world, it could not stop. Who wants to be the anti-gift-giving party?

As a result the disaster unraveled Europe but America kept it at bay until its government imported ideas from Communism and Fascism during the 1930s, namely state subsidies for the population through industry and control through punishment of ideological transgressors. Not surprisingly the generation after World War II adopted these ideas as the only moral imperative, bringing about the civil rights struggle.

We have a future if we choose it. Diversity doesn’t work. It offers nothing to everyone but a lot to those in power. We can stop the diversity experiment, repatriate the foreigners, and restore the original American republic by removing all civil rights and social control legislation. Only then do we escape the grim fate of Communist empires past.

When did the Kali-Yuga begin? | With nationalism and secession for all…