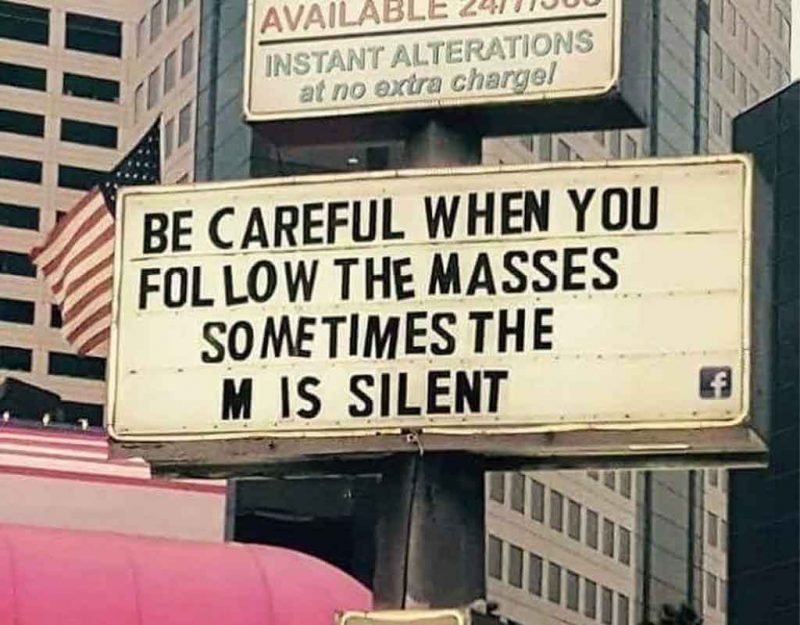 In the recent history of the West, the anti-racist movement has enjoyed great popularity among Christians, who see it as their duty based on Galatians 3:28, which reads:

At first glance it seems what the Crowd always wants to hear: you are all one which means that you, the individual, are owed an obligation by the group to keep you alive and not judge you for your failings.

In reality, the passage has quite a different meaning, since it serves to explain a theological difference from Judaism:

Know ye therefore that they which are of faith, the same are the children of Abraham.

And the scripture, foreseeing that God would justify the heathen through faith, preached before the gospel unto Abraham, saying, In thee shall all nations be blessed.

Translation: you should know that the group of people which are of faith are considered to be the same group as the children of Abraham, the Jews, because God told Abraham that through him, all nations could be part of the Jewish faith.

But that no man is justified by the law in the sight of God, it is evident: for, The just shall live by faith.

Christianity takes a different approach to Judaism, which demands an ethnic covenant, as all older religions did. Instead, it says that those who have the right mental state — this is borrowed from Buddhism — can participate in the religion, regardless of their origins.

However, this addresses one thing and one thing only: participation in the religion. This does not address national boundaries, but solely whether or not the new Christians can inherit the religion of the Jews without being Jews.

You will note a similar change in Buddhism, which was an offshoot of Hinduism. It no longer saw itself as the religion of the Hindus, but as a discipline based in meditation in which anyone could join and get their head sane.

Ironically, the group with the highest membership in American Buddhism today seems to be ex-Jews.

Christ hath redeemed us from the curse of the law, being made a curse for us: for it is written, Cursed is every one that hangeth on a tree:

That the blessing of Abraham might come on the Gentiles through Jesus Christ; that we might receive the promise of the Spirit through faith.

This part of the passage — I have excerpted what I deem to be crucial parts, but you can read the whole thing yourself at the link above — makes it clear that the question here solely involves whether Gentiles can become neo-Jews (Christians).

It makes it clear that there is a historical progression here, from baby steps under ethnic Judaism to a wider audience under Christianity:

But the scripture hath concluded all under sin, that the promise by faith of Jesus Christ might be given to them that believe.

But before faith came, we were kept under the law, shut up unto the faith which should afterwards be revealed.

Wherefore the law was our schoolmaster to bring us unto Christ, that we might be justified by faith.

But after that faith is come, we are no longer under a schoolmaster.

After that we have the famous line, which at this point should be clearly revealed as speaking only of participation in religion, and then this rather poetic ending:

And if ye be Christ’s, then are ye Abraham’s seed, and heirs according to the promise.

If you join in the faith of Christ, then you have become Jews, and can inherit the promise to them that they will inherit the Earth and other good stuff.

Nowhere in here does anyone say “all races are the same,” but in fact quite the opposite: races are different, but they can participate in Christianity as well, and by doing so, they become technically Jewish.

That means that Christians reading this passage as a call for abolishing racial boundaries have not only missed the point entirely, but read the passage massively out of context, using it for their own purposes instead of being guided by their own faith.