Charlotte, N.C. Burns In Latest Round Of Diversity Riots 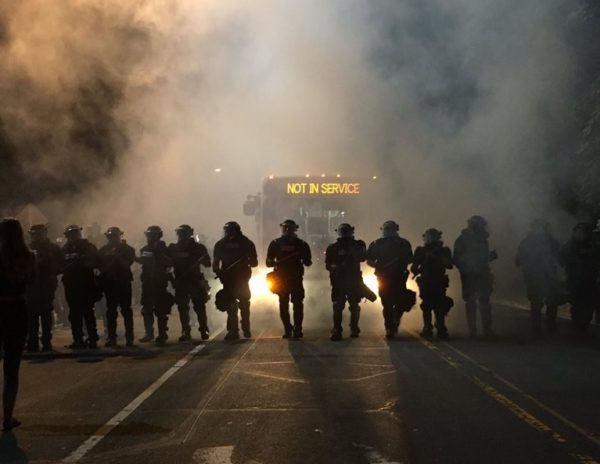 Here we gather again to mourn yet another race riot, this time in Charlotte, N.C. — although the media will not call it such.

Yet again we see the Leftist narrative debunked but only after it served its purpose, which was to inflame the community:

Quiet returned to Charlotte streets Wednesday after the police-involved shooting of an African-American man ignited a night of anger and violence that left windows smashed, stores looted, trucks set ablaze and 16 police officers wounded in the melee.

The violence erupted hours after the shooting death of Keith Lamont Scott, 43, who police say was armed and ignored several commands to drop his weapon.

Charlotte-Mecklenburg Police Chief Kerr Putney, at a news conference Wednesday, rejected claims Scott was holding a book, not a gun, and said the gun had been recovered by detectives. No book was found, Putney added.

As is typical, there are no solutions on the radar. The Left wants more power to minorities, including benefits payments and affirmative action; the Right wants people to stop pointing guns at cops; out here in the cold wilderness, us Realists want to look at the situation as a whole.

It makes sense to be sympathetic to the African-American point of view in the bigger picture. Not the specifics of this event, since those were rendered false by the Left-agenda narrative. But let us look at African-Americans and their situation, with compassion.

There is no possible solution for African-American angst in America. No matter what we do — trillions in welfare, lawsuits, benefits, affirmative action and draconian civil rights laws — they will always know that this society was founded by people other than them, designed for people other than them, and that African-Americans are only here because they were sold in Africa to slave traders for use as farm labor here.

Even with a black President, and former black Secretaries of Defense and State, with black Supreme Court justices and Martin Luther King Jr. as our official American Gandhi, black discontent roils. It does so not because of poverty, but because of the denial of pride.

For African-Americans, or any other population, to have pride in their nation they need to know it was founded by them, designed for them, and ruled by them since its creation. They need to have a sense of belonging that comes only from being the group that is the nation, and not one group of many, especially not one whose original utility was as chattel labor.

No matter what we do in response to this latest shooting and the resulting riots, nothing can ever be done that will make African-Americans happy, because the condition of their unhappiness is created by diversity.

Thus, as we contemplate this latest tragedy in a long line of American and European race riots, we should instead of looking for someone to blame, look at the conditions which make such events inevitable.

The Echo Chamber Of Equality | The Scandinavian Paradox