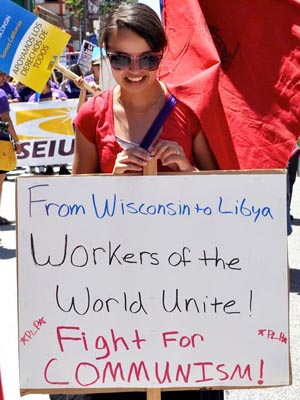 Mahatma Gandhi once said that you have to become the change you seek in the world, and while quoting known poster-ready icons for peace is annoying, some truth can be found in that statement. Until the individual is clear about what change is desired, the change that arrives will be more like its opposite.

Right now in America and Europe protests are breaking out over a lack of money being spread around. There is no questioning of what has caused this situation; instead, blame is being leveled at the financial community based on the assumption that since they have money and power, they must be responsible.

Sage cynics across the world shake their heads because they realize that abuse of power does not happen with a complacent and narcissistic population. Let’s assume that Wall Street are the horrible evildoers we assume: why is it that we only notice this when there’s a recession?

Otherwise, we’re okay with it — us 99%. For the last forty years, the goal of the American and European populations has been a focus on the narcissistic generation, a sort of eternal September of the Me generation. What are you tweeting? What are you buying? Who are you talking to? Me, me, me.

When people are so distracted, it is strikingly easy for corruption to infest a society. It doesn’t happen at the top, at first. It starts with the man on the street. He believes that history, social hierarchy, learning, truth and knowledge are secondary to his pleasure.

In his eyes, society already exists and he doesn’t have a role in upkeeping it. It just is; he takes from it and enjoys, in exchange for a certain amount of labor. Every other decision is arbitrary. Reckless growth? Cheap money from internet scams disguised as a dot-com boom? Imported labor?

“Great,” he thinks. “That’s my money getting more valuable, my possible fortune, and my cheap lawns and home improvement projects.”

It doesn’t occur to him that:

When Joe On-The-Street finds himself squeezed by a recession, he then rages at — who? Well, he doesn’t know why it was caused; remember, he’s oblivious to the relationship between cause and effects. So his mind grasps at whatever simple principle it can, which is that anyone “in charge” must have done this.

In doing so, Joe very cleverly sidesteps any responsibility. It wasn’t Joe blowing off politics or voting only for things that benefited him personally. It wasn’t his reckless spending, or wasting time at a make-work job which has no actual function. No, someone else must have done this to him.

Now that the fit has hit the shan, Joe and his colleagues are in the streets yelling for change. They don’t understand why we can’t all get easy make-work desk jobs, and spend our money on iPods and our time on Facebook, and still be a vast and powerful nation. Joe thinks this just caused itself.

I guess in all our years of elementary school propaganda about how we should share our toys, how everyone is equal and how we should be mean to those who aren’t nice to everyone no matter how much they conflict with what we know we want out of life, we forgot one lesson: nothing comes without us making it happen.

We must maintain them.

We can’t just let go of the reins and start living as if we were worlds unto ourselves, cut off in our comfy friend groups and urban apartments, spending our money on gadgets and avoiding social responsibility (other than that which benefits us, namely the manic quest for equality). We have to build.

The 99%-ers on the street in the financial districts of the world have themselves to blame for this crisis. Their self-centeredness and lack of useful contribution marooned our society in illusory expectations, and now they’re continuing this process by demanding someone else fix it.

As with all revolutions, they started with an unclear idea and it has been replaced by a clear idea which tends to resemble the leftist/liberal monologue of the past sixty years: wealth redistribution, entitlement programs, no accountability and everyone is accepted without having done anything useful.

That’s a formula for producing vast hordes of incompetent parasites who want to take, but not give. They want to spend their lives dedicated to themselves, not any larger principle of building a civilization or striving toward some ideal of emotional, moral or intellectual value.

The result is decay. This decay was fostered upon the majority by the minority, who are the Me generation and other trendy people (hipsters, urban creative class, political protesters, resentful minority groups, marketing experts) who want us to believe we should each live for ourselves and nothing else.

As decay sets in, the majority do what they always do: protect themselves as best they can, and demand increasingly conservative government to counteract the decay. The 99%-ers see this and it fits right into what they expect, which is “oppression” against their movement for freedom/love/self/whatever.

The cycle restarts. The barons on Wall Street get rich because the average citizen is confused and delusional. This means that the citizens get involved with the dog-and-pony show of leftist/liberal politics and public drama, but ignore the causes that make this civilization what it is.

As this anarchic chaos rises, behind the scenes the oligarchs take over and make their vast profits. They can do this only because of the social disorder created by the 99%-ers in their quest to smash the power of the majority. Without the 99%-ers, we would not have oligarchs.

While they want us to think these protests are some grand egalitarian movement, the truth is that the Occupy Wall Street folks and the Obama generation are more selfish and self-centered people who want to take from the competent, and give to themselves, so they can live for themselves.

In an irony of history, they are the cause of what they protest, and because they do not know what change they actually want, the change they claim to desire will produce the same conditions they bemoan. The result is an endless cycle of decay, powered by the self-centered oblivion of the average citizen, not the bankers.

A lesson in statecraft | Victimhood