A lesson in statecraft 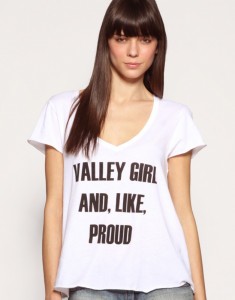 For those of you who still think that elections, ideology and political affinity are key factors in the political agenda of (Post)modern nation-states, AÂ ‘valley-girl’ quoted by Erik Nordman recently pointed out:

As much of a flibbertigibbet the girl might have been called in less egalitarian times â€“ sheâ€™s right:

Banks = [debts, credits, finance] which controls the present and future spending of government.

This is then calculated by state officials who point out to their ministers: “Hey there’s such and such amount of money available so we have to cut on army and welfare and education budgets and we also can’t do that favourite little project of law and order that a coalition party wanted.”

Minister says: “Okay, but we can scrape together a little and do a phoney symbolic version of that project right?”

Official replies: “Yeah, we can do that. That would be great because then the administrative personnel doesn’t have to reform so much about the way we are used to doing things around here.”

Minister concludes: “Okay then let’s do these budget cuts and dress them up with ideology of the dominant parties. I’ll present it to parliament and they will probably agree because politicians aren’t finance experts and everyone understands the budget’s tight.”

The machine of state is a machine of state. Itâ€™s a self-rolling stone. Its direction is decided by considerations of stability and self-sustenance. The state officials make a calculation: â€œIf crime gets above % X then people will get dissatisfied and set up their own militias. That can infringe upon the sovereignty of the state. Therefore we will spend budget until the crime solving rate is brought to % X. Then other issues will be targeted.â€

And: â€œIt has been calculated that if X % of people work without insurance, this will lead to Y % of disabled people without money. Until the resentment about inequality and resulting crime rise to Z%, it will have a negligible effect upon our systemâ€™s stability. Therefore, budget will be spent upon insurance until X and Y are below point Z.â€

Politics these days are ran by a clique of professional â€œmanagers of the public lifeâ€. This is a class an sich which revolves around raison d‘Ã‰tat â€“ Values never enter into it. John Stuart Mill even pointed out that as our society grows increasingly complex, the knowledge of these civil servants will have to be greater. Therefore, he pointed out in Representative Government, theyâ€™ll always find ways to maintain their positions, and will avoid coming to a situation in which they are no longer necessary.

At the heart of our political system, our self-rolling stone, lies an emptiness regarding morals, spirituality and ideology. This was all started by Thomas Hobbes â€“ because Hobbes reasoned that people could never agree upon which principles to live by, or which mode of life was highest and most preferable. Such was proven by the religious wars between Catholics and Protestants. Hence, Hobbes reasoned, people could never agree upon which rules to apply, and thus there would always be a war going on, a Bellum omnium contra omnes.

What we could do, however, was to decide which person would make the rules for us. Which would be either a single ruler or an assembly of men, Hobbes describes in Leviathan. Therefore, the only thing we could do was to transfer a bit of power over our lives to a sovereign. We would no longer have the freedom to do as we wished and go around raping and pillaging â€“ but in return weâ€™d also no longer have to fear for ourselves and our families. We gave up a bit of the sovereignty over our personal lives and put it in the hands of the state. To ensure for ourselves a degree of order and stability.

What everything discussed here boils down to is that nothing is going to change. Politicians, as well as ourselves, spurn on the masses with phrases about equality, patriotism and transcendent spirituality. The Truth of the matter is, my friend, that governments are bound by the banks who create all of their money without even using the printing press. Itâ€™s done simply by saying: â€œOkay, you got it â€“ you can spend this amount of money in the name of this bank. But you have to pay interest.â€ The ministers say: â€œOkay,â€ â€“ because they are dealing with crime and unemployment and environmental issues and need money to keep their personnel going.

Regarding these matters the state officials cook up proposals which then go through parliament (bodies of peopleâ€™s representatives) in the form of bills. These bills are purposefully unreadable because theyâ€™re written for experts by experts. But nobody can publicly admit this because it comes down to either declaring yourself as stupid or kicking your personnel. And the politicians rely on their personal to accomplish the things they promised to the electorate.

Thus a politician is caught in a trap, and if he wants a serious reform on any issue, he will:

This is why utopic visions of future societies will always be that: utopic visions of future societies. For the same reason I had always known that voting for Obama would mean voting for empty promises. Speeches about inspiring values and mankindâ€™s moral mission have nothing to do with raison d‘Ã‰tat. But people just donâ€™t get it â€“ they keep falling for the democratic trap. Which is why democracy is doing what itâ€™s designed to do â€“ preserving stability by providing people the illusory notion that they have a say in the matter.

If a politician has to admit he canâ€™t live up to his electoral promise because of 1, 2 and 3, he will say with so many words: â€œI am a weak leader.â€ Therefore he says: â€œI have shifted my opinion.â€ Which is a sign of strength because then it seems youâ€™re rowing against the tide.

Eventually, the decisions of politicians become laws. If you violate those laws, youâ€™ll probably end up in front of a judge some time. And then youâ€™ll say: â€œOkay but I did this because it was the right thing to do considering this and that moral argument.â€ And the judge will say: â€œBut this is the law. And the law is the law.â€

And then youâ€™ll find you lack a non-subjective vocabulary to criticise the decisions made by the representative government. Because your sovereignty has been transferred to that body of state to make democratic decisions in your name.