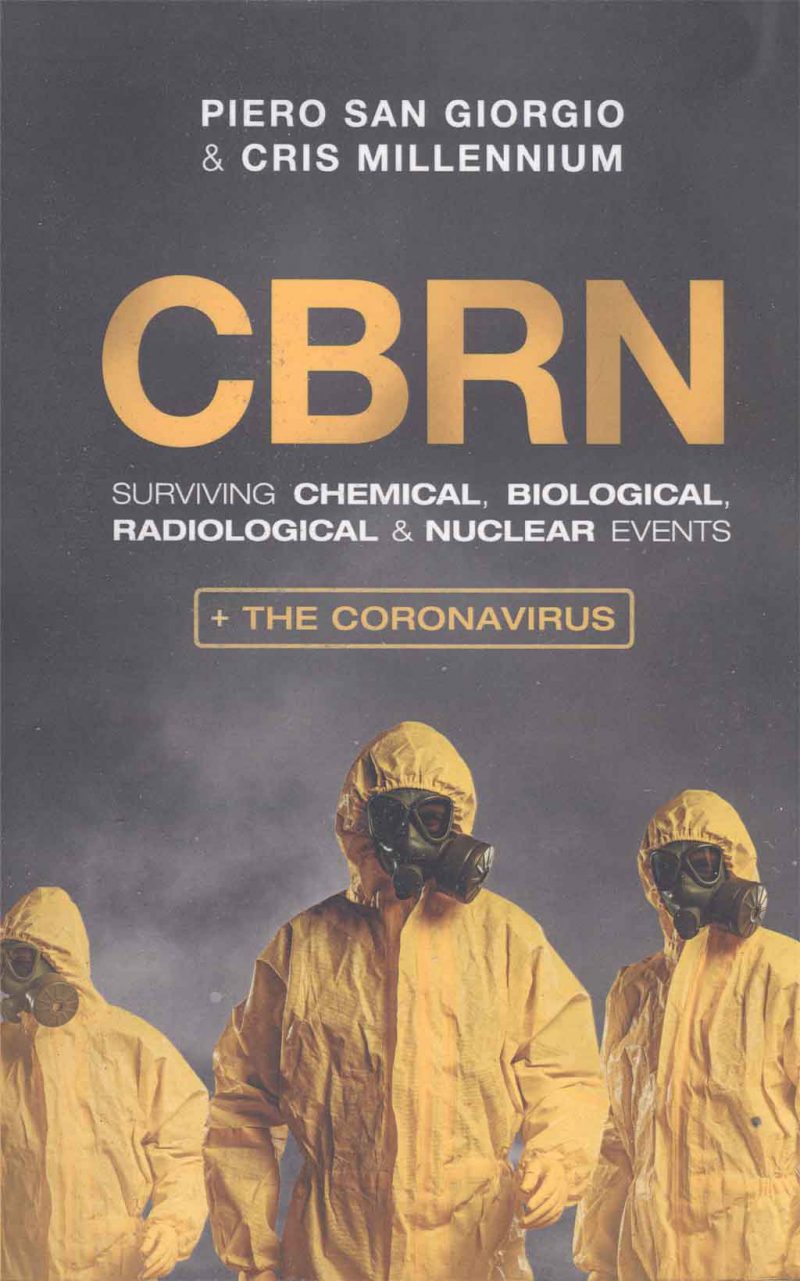 Coming at a time when people are wondering how the COVID-19 response could be so bungled quited uniformly across Western democracies, CBRN: Surviving Chemical, Biological, Radiological & Nuclear Events by Piero San Giorgio and Cris Millennium acts against ignorance with some solid knowledge of how to protect yourself against these events, even when everyone else gets it wrong.

Written like a casual textbook more than a hysterical mass-market self-help or paperback political book, CBRN addresses the major forms of contamination and infection in our world by reducing them to risk vectors, demystifing them from hostile demons into simply being threats that can be mitigated with knowledge and behavior changes.

Those interested in surviving terrorist attacks will find this book most useful because it includes archetypical attacks of every type and how they can be recognized and immediately counter-acted. The conversational but fact-dense style simplifies complexity as much as possible with out losing meaning.

In case of environmental contamination resulting from a Fukushima-type accident, things are a bit different. First of all, the quantities of dispersed radioactive material are much larger than in the case of a nuclear explosion. Secondly, the closer to the damaged reactor you are, the higher the proportion of heavy elements. Radioisotopes such as plutonium and uranium will therefore be present in large amounts. As for strontium-90 or caesium-137, they could be transported over greater distances. In truth, all these radioisotopes are extremely dangerous and some of them have incredibly long life-times… the areas in the proximity of the plant will therefore remain off-limits for at least several hundred years.

However, the further one moves away from the accident site, and thus from the source of contamination by heavy radioisotopes, the more rapidly the danger decreases. In addition, this decrease in activity will be intensified by natural phenomena such as the seeping of radionuclides into the soil, their dispersal through runoff, and their expulsion by waterways and rivers, until they have ‘disappeared’ into the seas and oceans. Most of these areas are likely to have acceptable levels of radioactivity to enable the return of human activity quite quickly. (443)

This passage, for its measured calm and logical breakdown of events, shows us exactly what people need to be reading by flashlight in their backyard nuclear shelter as they try to calm their panicked families. It presents the issues clearly from biggest concern to least, introduces some balance, and gives a clear path forward.

CBRN does the same for many variants of the “events,” both attacks and accidents, in its title. As it turns out, these have more in common than people realize: those who wish to survive must isolate themselves from contaminants, find a way to survive, and then get away from the most crucially-affected areas.

While much of the book takes a textbook approach, the use of real-world stories to show how events will likely unfold presents perhaps the greatest strength of the book, which is that like all writing it allows us to project ourselves into characters and situations, and therefore, to have thought in advance about how we will respond when the crisis hits.

You may note a minimization of “scientific” language to only the necessary. The book begins with vocabulary but keeps an eye on demystifying terms and reducing complexity by assessing degree rather than differentiating between variations of the same conditions.

When lore — stuff passed down verbally in conversation without fiscal responsibility, therefore equal parts idle erroneous chatter and time-honored truths — fades and science is made clear, we are armed with knowledge against our fear.

During a nuclear explosion, the people who are quick to take refuge in a shelter and stay there for a few days are unlikely to enter into contact with these radioactive particles, especially if the shelter is equipped with an air filter. Indeed, most of these particles will have settled during the first forty-eight hours. Over time, dust deposits loaded with radionuclides will be carried along by water and their effects will fade, except in places where, due to an accumulation effect (sludges, mudbanks, ponds, etc.), their concentration will grow and remain dangerous.

Back in 1986, during the explosion of reactor 4 in Chernobyl, the large number of casualties was mainly due to the slow evacuation of the areas located near the accident site. For several days, the inhabitants inhaled an air laden with radioactive dust that reach a level 400 times higher than the ‘acceptable’ limit. (126)

If we listen to the media narrative, the situation seems to be created in broad categories: nuclear bomb goes off, everyone in a certain radius evaporates, and then everyone worldwide dies of nuclear winter and radiation.

With CBRN, one sees between the media categories to what can be done in the case of each of these events. Instead of an absolute boundary to a uniform composite category, as was used in the pandemic to assure us that if we encountered any COVID-19 we would die, this approach shows us that risks are all around us at “acceptable” levels, but when they get heavier, we need to take precautions and can potentially evade the worst of it.

That slides this book from pure textbook closer to the self-help category but without the neurotic creeping manipulation of that genre, which tends to lure in desperate people and crush their sense of autonomy so that they can join the cult promoted by the person writing the book who hopes to have their own talk show someday.

Instead, it arms people with defensive knowledge. If the book has a subtext, it involves transferring from superstitious ignorance to cautious and highly particular knowledge.

The few people who found themselves immune (without being aware of this at the time), and who therefore contuned to deal with the corpses, simply stacked them up in heaps to let them decompose or, whenever possible, piled them up to burn in pyres. This was strongly against the epoch’s traditions and religious practices and the Athenians felt abandoned by the gods. In addition, the disease affected indiscriminately both the less pious and the more devout. The temples, now filled with refugees from the countryside, turned into major infection sources, including the temple of Apollo, the god of medicine and disease. Prior to this, the Athenians inferred that the gods had sided with Sparta.

In his comments, Thucydides criticises this reaction, labelling it a superstition. At the time, medicine had already correctly deduced that it was a contagion rooted in natural causes, particularly through the observation of birds and animals that had perished after consuming infected carcasses. Be that as it may, Athenian morale in the Peloponnesian War was thus affected on a long-term basis. (215)

These words proved to be prescient, since we have now repeated history with COVID-19. Instead of looking logically at the situation, fear ran rampant, and now the gods of democracy have been dethroned in the midst of a losing war, kicking off with a cold war and election theft.

This book feels heavy but reads lightly and can help to calm fears about the instability in which we live, since as our political system decays we can expect more chemical, biological, radiological, and nuclear terrors and accidents.

As such, it is a good part of any postmodern household, going next to the bug-out bag and bulletproof backpacks, since a casual reading of this congenial prose leads to a good deal of knowledge without the arduous tedium of academic materials.

Democrats Are Creating A Zombie Army of Unemployables | News (March 21, 2021)