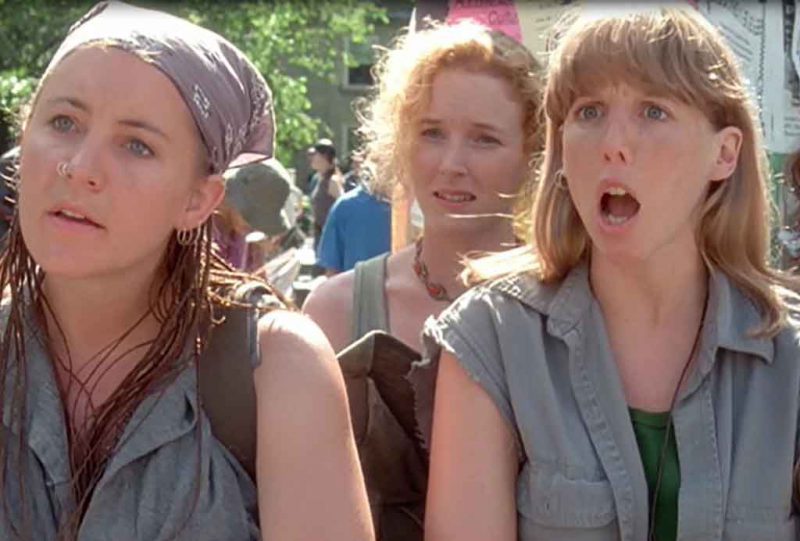 Paul Schiff’s college comedy PCU has surprisingly emerged as one of the most culturally prophetic films of the 1990s.  A satirical portrayal of the numerous “alternative” social factions that infested that liberal college campuses of the time, PCU hilariously captures the ridiculousness of the protest culture that was mostly then-confined to higher education dormitories.

Brilliantly labeling the flannel clad proto-SJW’s as “Causeheads,” protagonist Droz (ironically played by Jeremy Piven years before being #meeto’ed) utters a line of dialogue that would illustrate America’s future in eerily prophetic fashion:

These, Tom, are the Causeheads. They find a world-threatening issue and stick with it…for about a week.

The Causheads of the real world are much like Lepers with the only difference being that the symptoms of their disease are displayed emotionally rather than physically. They are however equally grotesque in intellect and in spirit as Leprosy is in physical deformity, and thus their disease like any requires a detailed understanding in order to be properly diagnosed.

The chronology of the Causeheads first begins on the campus:

The Causeheads are just what they sound like, a group of activists who simply switch what they’re campaigning for or against based on fads…

But it’s become much more than deciding not to eat meat or saving the rain forest or outlawing abortion or allowing guns on campus. People still frequently jump from cause to cause (the “South Park” episode “A Scause for Applause” is a great take on this) but college activists have become increasingly specialized in their nature. This has extended into the broader public as a whole as well.

There is literally a cause for everything. Troubled by how fat people are treated? Join the National Association for the Advancement of Fat Acceptance. Don’t like how lobsters are treated? Support the Lobster Empathy Center. Think biology classes should teach creationism? Yeah, we’ve got that too.

In the decade and a half to follow PCU‘s release, we would see what happened to the Causeheads when they leave the campus and integrate with society.  As is often the case, the cultural atmosphere in the collegiate bubble later tends to be reflected in the culture of American society.  This was the case with the civil rights movement of the 1960s and all of the individualistic self mutilation that comes with it.  This would also become the case for the Causeheads, who would be decimated by the bursting of the housing bubble or the economic brutality of the great recession.  Duped into overvaluing their mortgages and degrees, many struggled to find employment or keep up with their housing payments.  Usually unemployed, often living with their parents well into their 20s and 30s, and many times abusing narcotics, the Causeheads would allow their difficulties to entrap them into a mental state of permanent defeat.  Full of vitriol for the capitalist societies that failed them, the Causeheads were ready to protest anything under the sun to fulfill a never ending desire to feel that they fit in somewhere and have in some way contributed to a better world around them.

We’d first see the Causehead movement in the form of Occupy Wall St.  Pooling into the finance district of Manhattan in the masses, the leaderless Causeheads screamed and shouted and publicly melted down for the entire world to see. With no actual goals or demands, the Occupy Wall St. was nothing more than a grandiose temper tantrum and physical expression of uselessness. Aside from some cheap highs and a day out of the basements of their parents, Occupy Wall St. was a complete and utter failure, even as admitted by the left’s most favored propaganda outlets:

While the organizers prided themselves on the fact that they had no real agenda other than to vent the nation’s collective anger over the economic divide and injustices on Wall Street, this lack of clear, stated demands was a huge mistake. It should’ve taken a lesson from the Tea Party movement, which was and remains powerful, articulate and clear in its demands and which sent 63 congressmen to Washington in an election year to advocate and legislate its small government, less taxes agenda.

And that last point is the real shame of it all. In an election year as significant as this one, the Occupy movement is as good as dead. It will have achieved nothing legislatively, it will have elected no one and, in the end, it has had no material impact on American life.

This would become a running theme for the Causeheads, as they would soon resurface at the severe misdirection of the mainstream media’s coverage of police racism towards African Americans.  Baited into thinking all cops were racist and bad, the Causeheads were quickly to align themselves with the spiritual successor of the Black Panther movement, Black Lives Matter.  Believing themselves to be defenders of the underdogs, Causeheads reprised their Occupy Wall St. hysterics and mourned the injustices of police brutality. But Causeheads were not only deceived into joining what was later revealed to be a black power movement, they often the victims of the very mob they had incited.  Furthermore, the footage and the trials of what had happened during the incidents that had sparked the BLM protests would prove that the actions of the police were justified in these cases.

Like the similarly goalless Occupy Wall St. movement, Black Lives matter too would fail as admitted by the liberal darlings at The Guardian.  But not only did it fail in unthinkable fashion, as indicated by the congressional victory of Dan Donovan (the very district attorney who did not indict the man who murdered Eric Garner on camera), it actually worked against the man who would become the heroic champion of the Causeheads, Senator Bernie Sanders.  For it was none other than Black Lives Matter, the very group that the Causeheads had aligned with, who would protest one of Bernie’s rallies and go on to cost him the black vote that would seal his defeat to Hillary Clinton in the Democratic Primary:

Sanders was in a staunchly activist, anti-establishment environment full of people who were very much open to a candidate who wasn’t afraid of speaking truth to power. Yet he didn’t seem able, or willing, to speak about race beyond citing statistics on discrimination against black people.

This is the Black Lives Matter era, a time in which young black people are leading a movement demanding that the powers that be — Sanders included — address the specific plight of African-Americans.

With a fundamental suppression of the ability to admit they were wrong, and a limitless narcissistic desire to appease the cultist mob they misfortunately became a part of, the Causeheads would continue to adhere to the black power voices who infected their beloved news media and popular culture.  But in any case, it was time to move to their next protest, which would target the democratically elected president of the United States.  This protest would arrive in many forms in different liberal corners, but occurred most visibly in the form of a women’s march.  As we may remember, this was a nationwide protest against the president for using common homosexual dialogue in a private conversation. Once again, there was no list of demands or overlying goals, just flagrant hysterics and progressive leftist debauchery.  Just like the others, the Causeheads accomplished nothing, lost most of their party’s special elections, and have done little more than leave a gigantic mess for D.C. officials to clean up at the expense of taxpayers.

Now, having viciously protested the police force and the presidential electoral process, the Causeheads were ready to set the sight their sights on another cornerstone of American Democracy: the second amendment. After a school shooting in Parkland, Florida set the stage for a well prepared media circus, CNN paraded around some of the students from a journalism program that had once visited the studio. With the acting talents of David Hogg, who was conveniently interviewed at the scene of another shooting across the country earlier in the year, CNN and crafted a well-scripted story that prompted the Causeheads to drag their bastard offspring out of school for a day to protest the legality of firearms.  The Causeheads threw tantrums, cried, wrote outrageous think pieces on how not all firearms could have been envisioned by our founding fathers, and demanded a nationwide gun grab.  Bafflingly, the Causeheads neglected to consider that they were literally asking firearms to be carried only by the very same policy they were protesting earlier.  But because Causeheads are nothing more than an angry mob that follows whatever emotion is sporadically present, there are few and fleeting moments of introspective consideration.  And once all of the facts were finally in, Parkland’s cowardly deputy was revealed to be at fault, the supervising sheriff Scott Israel was the victim of the department’s first-ever no confidence vote, and now both are being sued by Parkland’s victims:

A group of students of the Parkland, Fla., high school where a gunman killed 17 people is suing Broward County law enforcement and local officials, arguing their failure to stop the shooter and safeguard the school violated their constitutional rights.

The lawsuit accuses Broward County officials of acting with “extreme deliberate indifference to” the students’ constitutional rights “by knowingly failing to engage with a recognized threat and intentionally evading his duties to protect the students and staff of Marjory Stoneman Douglas High School.”

At the time of this writing, the Causeheads have moved on from gun control and are now posting President Donald Trump’s meeting with Russian President Vladamir Putin.  Though we are not at war with Russia, the Causeheads have bought into the unfounded conspiracy theory that Russian somehow colluded with the President to get him elected and is therefore our mortal enemy. They did not protest presidential meetings with the presidents of Pakistan (who were helping Bin Laden hide from US military intelligence), Saudi Arabia (who donated over sixteen million dollars to Hillary Clinton’s charity during the 2016 election), China (who launched hacks into the systems of political parties during 2008), or Mexico (whose president encouraged their population to neglect U.S. law and invade the nation).  No, instead they are protesting Russia because the same people that told them Hillary had a 99% chance of winning the election are now coincidentally telling them that those polls were actually correct and Russian hacking was the only way to win.

So after analyzing the trends of the last few protests, we can assume that whatever the Causeheads are protesting will be supported by facts to come out a little later.  In this case, we can infer that some sort of evidence will come out soon that will indicate the forces accusing Trump of collusion are actually guilty of high crimes themselves.  But in any case, the current “Russian madness” should be dismissed as nothing more than noise and waste, as should the protest that will come soon after.  Nothing will be gained, nothing will be changed, and the cycle will repeat itself all over again.

Time will tell if Causeheads will ever stop finding things to freak out about, or if they will carry this disease to the grave.  At this time, the only cure to protest dysmorphia is traditionalist conservatism and realism, though the treatment has only been proven to work on those with a considerable I.Q. threshold.