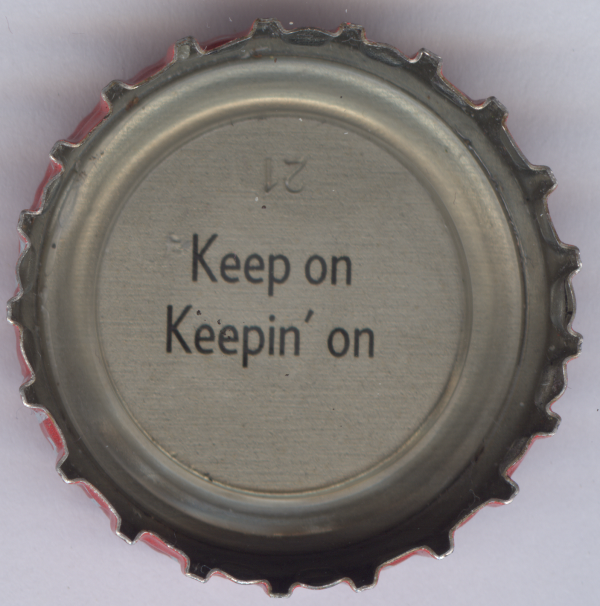 Coming from a liberal society entirely in the grips of Leftist ideology, few of us understand the nature of capitalism. Most of us confuse it with “business” or “commerce,” not realizing that those are actors within capitalism, not the thing itself.

Let me simplify capitalism: economic Darwinism. Profit is regulated by income, which is a factor of costs against price of goods and services, which are in turn regulated by supply and demand. That which provides a better product, price, convenience or otherwise eliminates costs for the purchaser will rise above the rest, much like in nature the more efficient animals gradually predominate. This carries both great benefits and great risks: it allows the best to rise, but if the environment is narrowed into easy stability, it rewards the merely efficient and the result is rats, pigeons and cockroaches.

Commerce opposes capitalism because of its competitive factor. What commerce wants is — as the image above says — “keep on keepin’ on” or “keep on truckin’,” which are generally-accepted bourgeois values that serve to narrow the environment. A narrow environment makes the situation easier for all involved, as they can keep on truckin’ — keep on doing whatever they have been doing, the money will keep flowing in, and they will get fat and happy as they pay off their home notes. People tend toward entropy in this way.

People hate risk. Any time risk is taken, they are both tested as to their own abilities to understand the situation and estimate its responses, and also subject to a roll of the dice. That great new business idea may turn out to be built on a mound of toxic waste. Risk is scary. It can also, in highly social — too much, many of us would say — societies like our own, pose a greater concern which is the threat of loss of self-esteem. Who wants to be known as the guy who built the best business ever on a toxic waste dump?

Capitalism on the other hand loves risk because much like the law of supply and demand, there is a balance between risk and reward. Greater risk means greater reward. Low risk means, well, what do we pay you for anyway? Like nature, capitalism rewards the wily creature who finds a quicker or better way of getting what it needs. This has no morality in itself, like all other mathematical systems, so it implies a need for two things: quality leadership and cultural standards to guide creators of products and services away from bad things and toward improving already good things.

What complicates this is economies of scale. The more you make of something, the cheaper it gets; this also applies to technologies, which over time become easier because a library of knowledge and techniques exists. Over time, margins — the juicy slice of profit between cost and sale price — narrow. This means that volume becomes more important and that fewer companies can be active in that particular niche. This means that over time products become cheaper, which prompts companies to cut costs including sometimes quality, at the same time the market reduces to just a few forces. Like rats, companies become opportunists for small rewards and repeat that process many times, where in the early stages of the market they were like eagles, taking high risk for aggressive and daring acts of conquest.

Commerce inevitably reaches this point because it increases the number of dependents. If you wonder why large corporations seem to do such a poor job, it is this: they eliminate internal risk as they get larger because of the difficulty of replacing key personnel, the greater power to fail given each of those people, and the need for redundancy. As products get cheaper and the market concentrates, costs also increase as size of the companies involved increases, which further reduces quality. When Microsoft screws up the latest version of a product, it is probably not because they are doing it cheaper, but because it is more expensive but also coordinated over many thousands of people. Commerce self-destructs through entropy, just like any species that makes it too easy on itself turns into an adaptive generalist like rats.

What lessons could capitalism teach us here? First, that commerce is a counter-weight to competition and improvement, and second that market divisions are highly useful. When all companies are competing on the level of “worldwide,” the tendency is for them to get bigger and bigger and less efficient. When a company limits its business to, say, the Allegheny Valley, it also limits its size. However, that is counteracted by the rise of large cities, which force companies to expand in order to meet competition as the technology ripens, and also produce labor forces which encourage people to leave jobs. That forces companies to make each job simpler and more separable, like an interchangeable part, and to have redundancy. If you wonder why cubicle jobs are soul-sucking hell of tedium alternated with incompetence and panic, this is the reason.

A society composed of many widely-separated small cities is more efficient in this way than having huge cities. Each one maintains its own industry, the labor market is relatively stable, and the need for growth is removed. This allows companies to continue to have relatively high margins and avoid completing the death-cycle of expanding too fast. It also means that each worker has a job with wider variety and more responsibility, thus more power to exercise choice, which makes jobs inherently less miserable. Coincidentally, this model proves better for the environment as it requires less transportation, keeps population from growing with commerce, and enables higher competition to improve the abilities of that population.

Commerce cannot stop itself from pursuing entropy because commerce is composed of individuals who want to maximize their own profit. Without good leaders and strong culture, it will drive itself into low-margin status and then find ways to broaden the audience for its product, which always means dumbing it down or finding a more prurient, ironic or trendy interest. All of those things are blight to societies and individuals. Left alone, commerce will create the overpopulation conditions of yeast left in sugar, where the number of individuals expands with supply of food until it is all consumed and they must eat each other (when you see yuppies, this process is underway).

Some businesses bring great benefit from their expanded state. Wal-mart, for example, has made low cost products available to many people who previously had no access. National car manufacturers are probably more efficient and accountable than Joe’s East Texas Motors. Most of these large businesses self-destruct however from failure of leadership. They become known sources of profit and attract people who use these businesses for the person’s own needs at the expense of the business and society, a process known as externalizing risk. Then the business begins to fail and eventually becomes a source of dwindling but constant cash while its previous customers, who keep buying whatever worked for them, fail to receive the information that they are now buying lower-quality products.

A good leader can restart a dying corporation or keep a growing one from expanding faster than its likely food supply. Like eagles, good businesses are hard on themselves, and do not take on more people than they need. They also pursue difficult food sources, which means keeping technology advancing rather than stagnating, instead of becoming indiscriminate. Good leaders of this sort are opposed by commerce, which sees them as cutting out profits or as they like to call it “creating losses,” by not jumping after “opportunities” that lead to reduction in quality and bloating of the staff roll. Public opinion agrees with commerce because it wants more easy jobs where there is low risk and high reward. Commerce and public opinion oppose actual capitalism on this issue, which — by virtue of the mathematical nature of economics — sees companies trying to avoid monopoly, bloat and entropy.

Politicians exploit public opinion in this way and create rules to favor commerce over capitalism. The more rules they make, the easier it gets to keep on keepin’ on, and the harder it gets to take risks. Everyone becomes bloated and actual value declines. The politicians know this, so they tend to make their money and invest it in foreign companies who are out-performing the domestic ones. Take the money and run. The public sees quality declining and as a result of value declining, its own salaries becoming less effective at purchasing goods and services, so it demands more rules. The cycle of entropy continues.

In this way, commerce like most human ventures becomes self-destructive as it succeeds. By doing what the eagles would not, which is gaining dominance over its environment entirely and making it easy like rats eating out of dumpsters, commerce hobbles capitalism — which represents risk — and makes itself ineffectual. Entropy wins and everyone suffers, having never understood any of the principles behind capitalism which might have saved them from human self-delusion in the form of commerce, public opinion and politics.