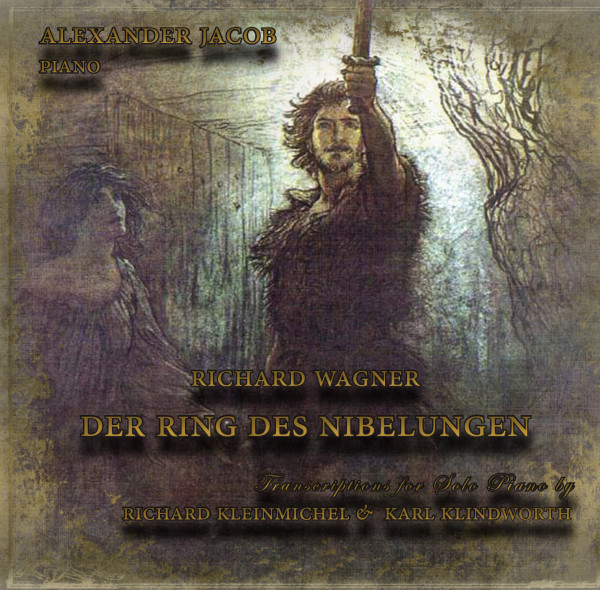 Some of you will be familiar with Alexander Jacob’s interpretations of Richard Wagner. Where his last work, Richard Wagner: Parsifal, struck an ambient balance using Wagnerian themes to create a dreamland, his second effort Richard Wagner: Der Ring Des Nibelungen attacks like the energetic works from Chopin, Brahms and Schubert. The piano is used as a dynamic instrument, full of rumbling crescendos and dramatic pauses, and the playing interprets this opera with as much sturm und drang as possible. The result is less of background listening that a comfortable adaptation of Wagner that could be played anywhere contemporary interpretations of those other composers are without seeming out of place, which puts Wagner in an entirely new light for those of us familiar with the operas only.

Using transcriptions by Richard Kleinmichel and Karl Klindworth, Jacob accelerates and condenses the sprawler Wagner epic into a series of fast attacks and then lengthy inter-textured melodies which are also given a more dramatic treatment. This brings forth the charging and churning spirit of Wagner in the opera Der Ring Des Nibelungen which was not as present in Parsifal, adapting to the outlook and spirit of the work more than trying for a precise, objective and utilitarian interpretation. This gives the work some idiosyncratic depth which puts the performer into an expanded role as interpreter and sometimes, even slightly, co-composer. This works around the utter impossibility of otherwise transforming a piece designed for a hundred-piece orchestra into a series of piano works clocking in at less than one-fourth the time.

Jacob does a credible job of avoiding the twin evils of bombastic pretense and modern hipsterized “interpretations” that are innovative only in their illogical, and weaves together the many themes of Wagner into a comfortingly familiar series of classical piano forms more from the Romantic period than the Modernist, translating and expanding with the ear of someone who both enjoys the original music and is familiar with a wide range of classical. Where Parsifal gently surrounded the listener with the sentiment of Wagner, this new work from Jacob brings out the spirit of the man, alternatingly aggressive and contemplative, but always building to a greater depth than meets the first glance.