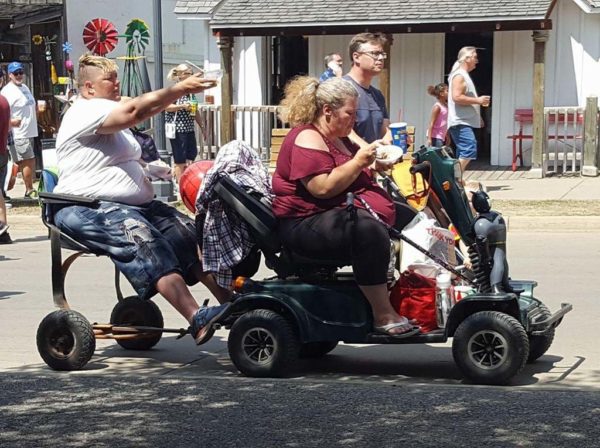 All of life comes down to the choice of whether you choose a human order or an order based in nature, God or gods, and logic. If you choose the human order, you will forever be playing into the victimhood-scapegoat spectrum, where you have to blame others for the consequences of your own bad decisions.

Donald Trump just struck back at centuries of American prole-bloat by proposing to deny federal deductions for state taxes. This is a classic conservative move which supports localism by localizing responsibility.

If you are in California, and paying 6% of your income in tax to the state, you no longer have Uncle Sap to absorb the cost of that. Instead, you see it as what it actually is: a cost that California is passing on to the rest of the nation. After that happens, you will be more wary when you turn on the television and see the politicians have a new program for “free” benefits. Nope, not free anymore.

Voters in New York could approve whatever insane edicts came from their political class and shrug it off because they were not paying for it. They paid taxes, sure, but then deducted those, so the end result was that no more money came out of their pockets. If they cannot take that deduction, they will see their tax load as it truly is, which is an insane amount of money, most of it going to parasites.

Now, instead, the burden is shifted back to those with the power of the vote to change it. When California comes up with another set of free benefits, the voters have to realize that they are paying for this as well. When New York’s chattering classes decide they want another ideological crusade, the voters know they are going to feel the pain for it.

Even better would be if states and federal government adopted a flat tax. No one votes who does not have some skin in the game. But in the long term, pretty much anyone with a pulse recognizes that 60% of our taxes go toward Leftist wealth redistribution programs and that if we cut those, we could pay almost nothing in taxes.

Many have even snapped to the awareness that their high property taxes are mostly going to fund schools that are more expensive than those in any other advanced nation, mainly because our diversity load is so high and we refuse to send anyone home for total ineptitude or bad behavior.

For many years now, Americans have viewed the wealth of their fellow voters as an infinite cornucopia upon which they had a blank check to draw for any programs that increased “equality,” including civil rights. These costs were then hidden away as debt, assigned to long-term funds which were never fully paid, and otherwise concealed from the robotic, mindless voters.

Naturally, humans tend to be generous when voting with Other People’s Money (OPM) and so the proliferation of social programs was massive. If you are paying relatively little in taxes, and know that you can squeeze it out of people in other states or income brackets, why not vote to spend a little more, if you anticipate receiving more?

A vast shift has happened in the West. For over two centuries, we were drugged with the promise of Leftism, and then realized that even in its mild forms, it crushes our economies and changes us into hopeless people, much as it did in the Soviet Union. Trump’s counter-attack on taxes is part of the reversal of this Leftist wave and the return of accountability, sanity, duty and responsibility.