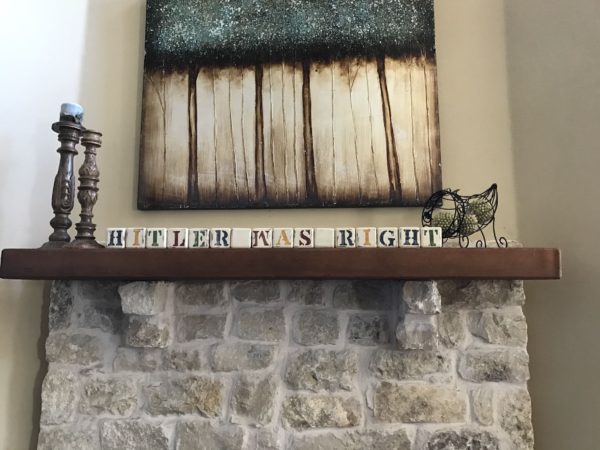 No matter what side of the aisle one appears on, Adolf Hitler presents a divisive figure. Although he is demonized in the West, much of that has to do with the need to produce a non-Leftist killer to compete with The Terror in France, Lavrentiy Beria, Pol Pot and Chairman Mao who killed far more and for far less purpose.

At the same time, The Holocaust troubles us. We know that Hitler wanted to relocate Jews first to Israel and then Madagascar, but was blocked by the Allies in both attempts. Albert Speer in Inside The Third Reich describes the forced labor program that attempted to use the Jews to produce munitions, and its failure. And then we have the Wannsee Conference, which produced some troubling language:

Under proper guidance, in the course of the final solution the Jews are to be allocated for appropriate labor in the East. Able-bodied Jews, separated according to sex, will be taken in large work columns to these areas for work on roads, in the course of which action doubtless a large portion will be eliminated by natural causes.

The possible final remnant will, since it will undoubtedly consist of the most resistant portion, have to be treated accordingly, because it is the product of natural selection and would, if released, act as a the seed of a new Jewish revival (see the experience of history.)

…The evacuated Jews will first be sent, group by group, to so-called transit ghettos, from which they will be transported to the East.

The question arising here is one of literality: does “transported to the East” mean sending them to their deaths, by means of the “so-called transit ghettos,” which are known today as concentration camps like Auschwitz-Birkenau? Or was it literal, meaning that they would be sent somewhere to the East once the Nazi war machine conquered the territory?

One possible answer is found further in the document:

The beginning of the individual larger evacuation actions will largely depend on military developments.

Even in 1942, Nazi success in Russia was highly in doubt. For one thing, all of these military leaders had read European history and knew of the difficulty of invading such a vast and inhospitable terrain for previous armies. They were also aware of the raw population differential between Russia and Germany, the American lend-lease program, and other factors working against them.

However, none of this seems relevant. What matters is that under Nazi authority, Jews perished, although the bulk of the deaths now attributed to The Holocaust occurred in Eastern Europe at the hands of partisans who anticipated German conquest of their homelands. This places responsibility on the Nazis.

Naturally, few of us — even some of the raging anti-Semites out there — want to approve of this. It is at the least some kind of tantrum inspired by the same Leftist mania as The Terror, symbolism taking over from reality. At best it is administrative incompetence and callous indifference to human life.

Once we are past The Holocaust, however, we can see that Hitler was like every other world leader: a mixed bag. The bulk of what he did was uncontroversial and beneficial, much as many things that Stalin did were about what a Republican or Democrat candidate in America might have come up with to solve the same problems.

Do we blame Hitler for the Autobahn? His war on cancer? The ground-breaking Nazi environmental policy? And clearly he was right on some big things: diversity does not work, in any form. Communism is insanity. Democracy is dysfunctional. The Americans and English political structures had become corrupted from within.

On other fronts, he seems simply wrong not in a moral sense, but a historical one. Socialism does not work, although Hitler adopted the same form that the US and Europe were using at the time. Dictatorship does not work, either, but that does not mean that democracy worked any better except by historical accident.

Approaching Hitler and the war with balance we see that a complex, nuanced, and detailed view is required to get anywhere with the study of this period of time. The typical narrative that we impose on every war, such as “Saddam Hussein was a terrible man who murdered dissidents and gassed Kurds,” is like all great lies partially true and misleads us into action we would otherwise not take.

Hitler strikes me as interesting among recent Western leaders because he may have done this to himself. The aesthetics and symbolism of Nazi Germany were massively powerful, and it seems likely that Hitler found himself correctly understanding needs but not the solutions to get there, and thus falling back on primal and uncontrolled responses like The Holocaust.

Our goal in the future is to recognize with every leader what they did right and wrong. Stalin had some good ideas about military organization. Hitler was right about the environment, diversity and democracy. This is how we will remember them: as junctures in history where certain things were learned that we can carry on into the future.

For this reason, it makes sense to bury Hitler and lose the historical guilt and instead learn from the past:

â€œHistory is a whore of politics,â€ BjÃ¶rn HÃ¶cke, one of the partyâ€™s most radical politicians, said in an interview. â€œA great people like the German people, which lost two world wars in one century, no longer has a historical narrative of its own.â€

In an ornate Dresden ballroom in January, local AfD candidate Jens Maier told the crowd that what he called Western Alliesâ€™ re-education efforts after World War II led to Germans being convinced â€œwe are bastards, criminals, that we are worth nothing.â€

As his voice rose, Mr. Maier hollered into his microphone, to applause: â€œI hereby declare this cult of guilt to be over! To be over, once and for all!â€

Even more, we realize that Hitler was ultimately right about a number of things. Diversity cannot work and never will. The environment needs protection through the Nazi method, which involved limiting the amount of land that could be used. Democracy has done nothing but produce a further Leftward slide in the West which has made life miserable and driven us to insanity.

As Hunter Wallace writes in a related article:

In the 21st century, Swedes live under the same Iron Curtain of political correctness, multiculturalism and mass immigration as the British, the Germans and the Americans. Do you know who really lost the World Wars? It was all of us.

In other words, just like the Napoleonic Wars, the World Wars were wars of Leftist ascension that ended with Europe weakened and divided against itself. Now we live under another Iron Curtain, one which just like the last one is a product of liberal ideology, which now as then is based in egalitarianism, internationalism and population replacement.

None of this is new. There is one way of living which works for civilizations, if they want to be great, and any deviation from that leads down this path to breakdown. Plato mentioned how tyrants spoke of equality and imported “foreign” people to be their allies, shortly before taking control. History repeats itself.

The question for the West now is whether we can bury Hitler, accept what he got right and discard his horrors, and then apply that same standard to Leftism. We are living in a horror as great as Nazism or the Soviet Union, and every year for European-descended peoples has been this way since we allowed Leftism to take over in 1789 with the French Revolution.

Hitler was wrong to think that we could beat modernity with a modern-style society, as Nazism created. We cannot find any good in this thing known as modernity. Instead, we must escape it by recognizing that it is a false type of existence, and that we need to choose the method of civilization that works no matter what year it is, or soon we will be buried just like Hitler.

Deprived Of Your Tribe | The “Stupid Party” Continues Its Rampage As Sen. Ralph Shortey Arrested For Underage Sodomy