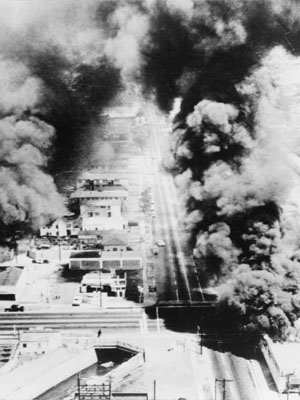 The West burns again. Like most of our modern experiments, the diversity experiment started with the ideal of equality and only later did we try to figure out how to make it work. Right now, it is failing. The future looks to be similar.

Our President has said that ‘If I had a son, he’d look like Trayvon’, a sentiment that many Americans share. But what caused the shooting of Trayvon Martin was not his appearance, but the larger division of American society caused by class warfare and with it, racial antagonism.

For example, we don’t hear about how Trayvon was assaulting a neighborhood watch officer in a community that had experienced numerous crimes, many of which were committed by residents of nearby poorer communities:

The answer may lie in police records, which show that 50 suspicious-person reports were called in to police in the past year at Twin Lakes. There were eight burglaries, nine thefts and one other shooting in the year prior to Trayvonâ€™s death.

It didn’t take long for the media to turn this into a good-guy-versus-bad-guy neighborhood. First the half-Hispanic Zimmerman became “white,” for the sake of an easy story. Then Trayvon became the photograph of a young child, not a picture reflecting how he appeared at the time of the confrontation.

The usual media pundits weighed in, always careful to stir up just enough discontent to sell newspapers. Controversy does not come from complex moral situations and studying the past history of the event. It comes from outrage, tears and rage, and feelings that we all might be victims together.

As a result, the media was quick to launch into a “narrative,” or a background storyline, in which they could wrap this story. The rich white people killed a poor black kid, just for being black. It’s like when they shot MLK or blew up those little girls in Selma.

They are joining the Trayvon Martin crusade by the hour now.

It feels like an echo from another era â€” when there was racial injustice in the headlines, when federal troops were dispatched to comb Southern swamps to look for blacks who had vanished.

And when lawyers for the NAACP slid into town with briefcases and addresses of safe houses. – “Fla. shooting stirs memories of civil rights era,” by Wil Haygood, Brady Dennis and Sari Horwitz, The Washington Post

People are channeling their frustration into protest. It’s unclear however what the target of their protest is. The division cuts down the middle: half see this as an example of latent racism in our political system, while others see it as sympathetic useful idiots coddling a kid who assaulted a neighborhood watch officer.

The emotional stories always bring out the “compassion” in people who want to be seen as compassionate. They want to believe in innocent victims and simple solutions. But as even the facts of the incident itself show, there are no such primary colored, yes-or-no answers. It’s a web of intricate dependencies.

Zimmerman, who was patrolling the neighborhood, saw Martin walking in his gated community. He called 911 and reported what he described as a suspicious person. Moments later, several neighbors called the emergency number to report a commotion outside.

Police arrived to find Martin dead of a gunshot wound.

Authorities say they have not charged Zimmerman because they have no evidence to contradict his story that he shot in self-defense. – “Obama: ‘If I had a son, he’d look like Trayvon’,” CNN

It would be easier if there were not a broad pattern of dysfunction here.

According to those on the left, the broad pattern is one of white privilege, institutional racism, poverty for minorities and a permanent non-white underclass.

If you talk to those on the right, the broad pattern is one in which government, media, and socially popular voices demand a “diversity” that is dysfunctional. They point out that the happiest countries are homogenous and have something more to unify themselves other than economics, politics and political affiliation.

Depending on who you believe, the shooting of Trayvon Martin is either another sad incident of an abusive system, or the early revelations of the failures of diversity.

Certainly, the Americans are not alone. In fact, Europe has discovered that multiculturalism has failed there, as well. Others are pointing out how Europe intended to assimilate its immigrants, which makes them irate because it obliterates their culture and values and this collision drives them to extremism.

Still others are noticing that mass immigration has made their home countries unrecognizable and that culture clashes can be fatal even without violence. Even in India, diversity itself is revealed as the culprit, even if those participating are decent, educated, intelligent and compassionate people.

A political scientist at Harvard, Robert Putnam, recently published his research in which he found that the problem is not blacks, or whites. It’s diversity. In any form, diversity leads to reduced trust, lack of social cohesion, paranoia, selfishness and retribution. Even among the same race, diversity causes crushing problems.

Could it be that this problem is less about black crime, white racism, Muslim extremism and European xenophobia than it is about the fact that diversity is dysfunction, wherever it is tried and with whichever ingredients?

Merah’s background of petty crime and poor schooling on a housing estate in a drab neighbourhood of Toulouse has catapulted the question of social inequalities and the integration of minorities in France back onto centre stage in the electoral campaign. Some said the social alienation and discrimination felt by second and third generation, ethnic minority French youths must be addressed in the campaign.

“He’s French, but in reality he has different origins, doesn’t he? France is infested with them,” said one elderly architect near the gun siege. – “Toulouse shootings leave France confused and demanding answers,” by Angelique Chrisafis, The Guardian

The links in this article are from mainstream and left-leaning newspapers.

There is no longer consensus about the origin of this problem. In the 1960s, when riots wracked cities like Detroit and Los Angeles, the accepted cultural consensus on both sides of the Atlantic was that white racism had withheld economic success and caused a black uprising. In other words, racism was to blame.

Although the usual voices have chimed in with that aged and mystifyingly self-referential refrain, the cultural consensus has evaporated. People are no longer so sure this is a black-versus-white issue. They’re starting to see it as all sane people versus the idea of diversity itself.

How do you mix different cultures? You either end up with an aggregate, which like all averages removes any particular abilities and replaces them with inability, or you force the newcomers to assimilate. That destroys their culture and heritage and replaces it with the majority, or a mix. In other words, you cannot mix cultures.

Fellow student Rachel Bustamante wrote that Carr was asking â€œabsurd questionsâ€ during a review section about female selection among peacocks, and eventually went on to ask why â€œevolution kills black peopleâ€ in an increasingly insistent manner.

When Dr. Stephen Kajiura apparently couldn’t satisfactorily address Carr’s question, she began yelling as students cleared the area around her desk, rose from her seat and hit a male classmate in the forehead as she screamed in his face.

â€œShe became increasingly belligerent,â€ Kajiura told the Press. â€œIt was at this point, a highly emotionally charged individual who was no longer capable of responding rationally. She was threatening to kill both me and the students in the class.â€ – “Jonatha Carr, Florida Atlantic University Student, Has Violent Outburst In Class Discussing Evolution,” Huffington Post

Diversity assumes that we can. After the American civil war, it became assumed that giving all people equal rights would lead to peace. It did not. Riots broke out in the 1960s. In their wisdom, the powers that be decided to open up immigration in the USA and Europe to people from all over the world.

Now that fifty years have passed on those decisions, we are seeing that the results did not materialize. Detroit is still a burnt-out shell of a city. Whites and blacks still mostly live apart. And we have an endless march of Trayvon Martins, Troy Davises, Hurricane Carters, Mumia Abu-Jamals and other “civil rights martyrs” who attract the sympathy of one side of the political spectrum, and the alienation of the other.

Despite all of this, few will make the honest and clear statement that would get us actually talking about the roots of the problem. That statement is: “Does diversity actually work?” and the answer cannot be airy rhetoric or warm feelings, but hard cold facts. How do you mix cultures without destroying them and replacing them with generic mall culture and featureless gray races of people without history?

No one has answered this vital question.

No one has demanded actual justice for Trayvon Martin. You cannot bring him back to life. What you can do however is fix the situation that put him in a highly volatile conflict.

There is only one way to stop race riots, civil rights martyrs and constant class warfare based on race. It is to give each group self-rule. African-Americans, when ruled by one of their own for their own interests, will have no one to blame. Neither will white Americans, since if African-Americans are ruled by an African-American, that leaves European-Americans to rule themselves, and on down the line for every other ethnic group.

That alone is a solution. It is not a quick emotional fix like crying for Trayvon or raging against the machine. But it is an honest start to figuring out why this happened and working around it ever happening again.