Britain Was Built Back Better By Diversity! 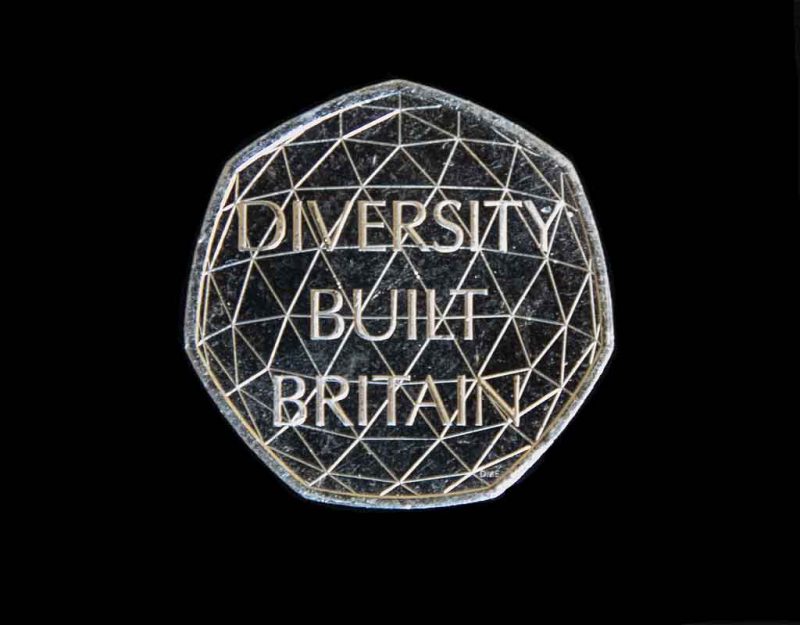 Inversion occurs when a group of people come together, decide what is the sainted Truth, and then ignore, prohibit, or degrade anything which deviates from that Narrative. This is part of the Human Problem, namely that we always go into the Social Narcissism Cycle.

That SNC begins where people come together, agree on some kind of unrealistic but symbolically important “truth,” then use pretense to shame others into obeying. If you do not believe that the golden idol is a god, look how you have hurt these others, who do believe! And so on.

Then the pretense gains viral power, meaning that the tool becomes the master and the master the tool, specifically that humans now serve promotion of the pretense even as it destroys them. All words, phrases, images, and practices must not offend those who worship the golden idol.

If you note that the above were mostly marketing terms, you are ahead of the game. Politics is marketing; political theories form a market whereby that which is most popular receives the most votes, mentions, “likes” on Facebook, and so on, and therefore dominates everything else.

Now if a cheeseburger pops into your mind… specifically the fast food version from the 1990s, half-soy and laden with sugar and weird cheap oils like canola, you have an idea of the fundamental flaw of politics. Just like businesses tend toward monopolies, politics tends toward simplistic illusions replacing previously functional entities.

Acknowledging this, we can see that a cheesburger is not a bad thing. If you let me grill roast you a grass-fed beef .33 lb burger on a real bread bun with red onion, lettuce, pickle, and thousand island sauce with honey mustard (basically the McD’s sauce) then you will see this, and also be reminded of the fact that the utilitarian cheeseburger — the one that “most people” think is “good” (enough) — falls far short.

The big point here, however, is that human social interactions are markets. Politics is a subset of this. In groups, humans converge on pretense because this applies to their individualism i.e. making the individual feel good in defiance of actual fears (parts of reality). Consequently, these groups become reality-averse, then edit reality out of their language and theories, and finally end up becoming anti-realistic.

Here we see the passage taking us from truth to lie in the name of the feelings of others. We start with the golden calf being an idol that some like to worship, and end up with the idea that the golden calf alone can save us, plant our crops, defend our lands, and the like; we have neutered ourselves, domesticated ourselves, infantilized ourselves, and enslaved ourselves to a viral idea.

Then, at that point, we have created a market for affirming the viral idea, and so people compete to make the most profound statements of that idea, pushing them further into radicalization, extremism, and reality-denial. The more outlandish and anti-real, the better!

With total dominance by the pop culture in the 1990s, America left behind the real and went into the anti-real, and Europe followed. Now we have Soviet-style slogans masquerading as profundity:

With the new “Build Back Better” campaign slogan, 2020 presidential hopeful Joe Biden has been caught plagiarizing yet again. However, compounding the seriousness of this “faux pas,” this particular instance of plagiarism, which was ripped off from the United Nations, has enormous implications for the American people and their liberties.

The slogan is now a catch-all phrase to push every Deep State policy prescription ranging from globalism and Big Government to “climate” schemes and “sustainable development” that would crush whole sectors of the economy. It goes hand in hand with the UN-backed “Great Reset” and the totalitarian “Green New Deal.”

WTF is the “Great Reset”? Oh, I see; the Great Reset is world federalism plus world socialism, basically what the Left have been banging on about since the 1830s:

These proles are joined by a number of proles who, through talent and luck, became quite wealthy, like the odious Warren Buffett, nerdly Bill Gates, creepily reptilian George Soros, droid Mark Zuckerberg, and of course wannabe Baby Doc Barack Obama and aspiring Chairman Mao Hillary Clinton.

These people have the same problem, which is that they are smart enough to create an operating system or hedge fund but not intelligent enough for leadership positions. Surprise! — same issue as the other bureaucrats have. These are shopkeepers and millers pretending to be kings.

Not entirely surprisingly, they have cultivated a number of people to their cause, producing Great Reset interest and Great Reset propaganda.

As far as the Green New Deal, it resembles the old New Deal, which itself suspiciously resembled Communism (and is now known, technically, as a form of “market socialism”). More accurately, however, it resembles neurotic pervert LBJ’s Great Society program, basically purchased allegiance with handouts only tangentially related to the stated purpose of the act. Naming the “Great Reset” after the “Great Society” was a touch of… inspired cynicism.

If you want a real Green program, it is the Half Earth program or the Deep Ecology mission statement, not the Green New Deal, which is basically a jobs program for bureaucrats and more welfare state subsidies for “the poor” e.g. people too drunk, lazy, insane, criminal, and dysfunctional to achieve anything but permanent poverty. If they called it the Tantrum Against Natural Selection (TANS) that would at least be more descriptive.

So now we have all of this verbigage, all of it sounding good, and all of it inverted, or lie presented as truth. To this pile of incendiary feces we can add the Diversity Built Britain coin:

The Chancellor, Rishi Sunak, commissioned the coin earlier this year following discussion with the ‘We Too Built Britain’ campaign, which works for fair representation of minority communities’ contributions across all walks of life.

What is the inversion here? If no minorities had been present, and all minorities died tomorrow, not only would Britain have been built, but it would be in better shape because diversity destroys civilizations. Minorities are not important to Britain, so propaganda must say the opposite!

You never see inversion about the actual realities we confront because these do not need symbolic propaganda to protect them. There will never be a The Sky Is Blue coin, or a Let’s Breathe Air slogan. Inversions exist to protect lies, and most humans speak only to con others into believing their lies so that the speaker does not face human consequences for those lies.

No one wants to state the grim reality which is that if all minorities, homosexuals, transgenders, retards, the insane, and bureaucrats disappeared tomorrow, everything would be better! We call it “tolerance” because we are being nice and accepting among us those who serve no positive purpose.

It took the Soviet Union seventy years to fall, but that really was iteration 2.0 of the French Revolution, “this time with subsidies!” In the 1860s, we adopted diversity; in the 1960s, pluralism; in the 1990s, prole-rule. Thirty years later, these things are falling, which is why we have all of this propaganda.

This shows us the strategic problem of inversion: it can invert again. Like any polar belief system, the whole is only as good as the detail, because once people see a detail “flip” and suggest that the inversion is not actually true, they tend to throw out the whole system at once, like they did when they chucked over the Soviet Union for modern kleptocratic but consumerist Russia.

We are in the midst of an inversion flip. People in the 1990s got conned into believing ancient Leftist ideals like utilitarianism, world federalism, subsidies/socialism, diversity, feminism, and globalism. Now we see that these, like the Soviet Union, were merely inversions and we can do without them.