Breaking The Back Of Virtue Signaling 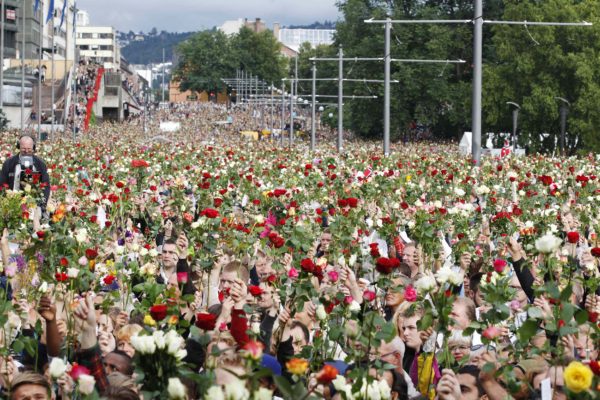 Look at the crowd. They all agree on some simple answer to a complex problem. You know in your gut that they are wrong, even if the situation does not break down into a 100% good party versus a 100% bad party. Their assertions, cloaked in positivity, reek of denial and death to the instinct in your gut and heart.

It takes a lot of guts to stare down a crowd, and yet the formation of crowds and their tendency to banish the sane and replace it with the insane is the major challenge to human cooperation. Crowds destroy everything by inverting the goal to be something non-threatening to the crowd. This in turn makes the action futile, and sociopaths take over and rule us.

This is why when you want to see what will be coming next, look to where the crowd is not. They will be clustered around the old idea, vigorously defending it because they want to keep whatever power and wealth they have because of it. They will be surprised when the change comes, but none will admit it until the end.

In fact, when change comes, the crowd inevitably splinters, with no member wanting to admit to having been wrong in support of what came before, but all members “hedging their bets” with at least some support of what might come next so they can claim they supported it all along. The individualism of humanity makes people oblivious to time, scope and context.

The crowd hates Anders Behring Breivik. The reason? He was the canary in the coal mine, or the warning that the “prole holiday” of crowd rule has gone on too long and has no piled up several huge problems due to its apathy and insincerity. He was the refutation of all they hoped would continue, so they could keep on being lazy and immoral without facing any consequences.

And even more, Breivik was a moderate who exhibited rare sanity: he shot the right bad guys.

Most people who oppose diversity and immigration focus on how certain groups are deleterious to our health. Breivik turned his focus toward how diversity does not work as a policy, including how it is soft genocide because it entails the replacement of a racial group with a new one comprised of mixed-race people.

Much as this blog opposes taking too critical of a look at any other ethnic group — although it does not deny the grim hatefacts of the situation — because that obscures our real focus, Breivik suggested we should look toward replacing the Leftist ideal of internationalism/diversity with the Rightist ideal of localism, including nationalism.

When one stops focusing on ethnic resentment, and instead targets diversity itself, it becomes clear that the real bad guys here are Leftists. In a Leftist-dominated era like ours, they face zero risk for being Leftist and gain social karma points for it. The solution, as Anders Breivik noted, is to raise the cost of being a Leftist:

While most people who found their words or sentiments echoed in Anders Breivik’s screed raced to distance themselves from him, an obscure American blogger named Brett Stevens was practically giddy to learn that Breivik, who murdered more than 70 people this past Friday in an anti-Muslim murder spree, had quoted his writing.

“I am honored to be so mentioned by someone who is clearly far braver than I,” Stevens wrote on Sunday. “[N]o comment on his methods, but he chose to act where many of us write, think and dream.”

Breivik’s manifesto quotes in full a 2009 essay called “Conflict avoidance and how to avoid it,” in which Stevens argues that being “forced” by social constraints to treat each other as equals, when in fact we are not, leads to dysfunction, frustration, and breakdown.

The SPLC foamed and moaned over this statement, but the point is simple: if you realize diversity is bad, do not take it out on the other races who are its symptoms, but attack those who are responsible, namely the Left. It especially helps to target the young because that is where indoctrination takes place, and parents will yank kids back from Leftism if they perceive a risk to their precious snowflakes.

Many of us, myself included, find the method distasteful. We would prefer to kill no one and to harm no one. However, that is impossible because when people are acting in a bad way, the only method of stopping it is to harm them. Society acknowledges this through its willingness to shoot criminals in the act of committing crimes.

In no way was Anders Breivik’s attack “an anti-Muslim murder spree,” as anyone who read his manifesto could tell. He wanted to defend the West against ethnic assimilation, but realized that the best way to do this was to make Leftist children afraid again. This in turn caused Norwegians to stop seeing teenage membership in far-Left groups as harmless fun or beneficial.

Diversity pairs well with equality, since we are discussing insane/dysfunctional programs. Neither are based in reality. Equality works for basic math, but breaks apart with complex creatures. Human castes, ethnic groups, genders, social classes, races, families, and individuals are not in any sense “equal.” They have different needs and abilities. Trying to make them “equal” is to deny who they are.

In turn, we know what diversity serves: first, it installs a permanent voting base to keep the Left in power; second, it obliterates the indigenous population through outbreeding, and the new beige/grey race is most likely to vote Leftist as well. Even better for the tyrants, a population without culture is dependent on strong leaders and will keep them in power for as long as the society lasts.

Our task is simple: restore Western Civilization. To do this we must repatriate all Other, ideally as gently and generously as possible, and then focus on exiling the bad people from our own tribes, and keeping the sane ones with whom to rebuild. A new society will rise up from among the ashes of the old, but as part of this, it must relocate those incompatible with this vision.

Breivik did some things I could not do. But by shooting 76 Leftists, he made it more risky to be a Leftist, and smart Norwegian parents are now holding their children back from such activities. It also broke the surface tension caused by the assumption that Leftism was universally right and uncontroversial, causing people to snap awake to the possibility of alternatives.

Ideally, we would not require such events. Human history however is transacted through misery. It takes a tragedy to draw attention to an error that we are making, in proportion to its popularity, and it takes further tragedies to overcome the inertia of individual fear that makes crowds into cloying groups which resist necessary change. There is always a trail of bodies and ruined lives.

The Left has been ruining lives for many centuries now, and has shattered people for merely speaking out. Those conditions create the necessary conditions for inevitable tragedy. When people refuse to see reason, violence will result, and Breivik wisely targeted the perpetrators — Leftists — and refocused our attention in that direction.

As time goes on, more people will see that Leftism is just one form of manifestation of an ancient evil, which is a hybrid of individualism, narcissism, solipsism and individualism. People decide to ignore what is not convenient for them, and then society falls apart because every individual is headed in a different direction, preventing cooperation.

In the future, our species will look more toward cooperation by unequal people rather than “control,” or having a centralized power whip the equal slaves into line to conform and do exactly the same things as a means of maintaining power. When this happens, people like Anders Behring Breivik will be revered for their contributions, however distasteful we find their methods.