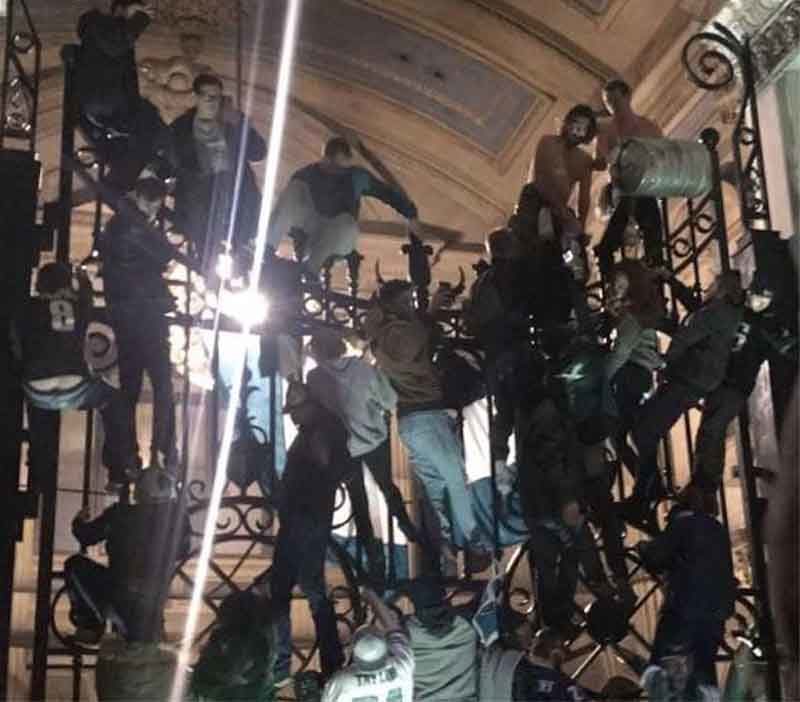 As we follow Rome into obscurity, people find they have little of actual importance in their lives. Almost everything we do is for the sake of appearance, and even our jobs are no longer necessary except to keep the illusion of an economy rolling. Underneath it all, we know somewhere in our gut that no matter how much we are told that our technology is great, things are not going well, structurally.

Every now and then this discontent peeks out from beneath the surface, as in the recent anarchic rioting in Philadelphia that converted much of the city into a raging no-fly zone:

Incidents of rioting and looting have taken place in the US city of Philadelphia as fans celebrated a historic Super Bowl win on Sunday.

A police officer is among those reported injured. Cars and shopfronts have been destroyed and looted.

Despite the city being only 35% white, and many of those having Irish or Italian extraction, Philadelphia has still collapsed into chaos about, of all things, a sports game. Like the football hooligans of Europe, these citizens seem to have channeled all of their frustration with life into a chance to “act out” and leave ruins behind them.

In a broader sense, we are seeing a method of control backfire. Unhealthy societies focus more on keeping everyone together than on achieving any goals. As a result, they tend to spend a lot of time thinking about luxuries, parties, sports, and shopping. What else are they going to think about? Certainly no one wants to discuss the future because they believe it to be doomed.

This arrangement benefits everyone because each person is focused on controlling all the others. Even more, every person hopes to benefit from the situation at the expense of others. As Cicero said, “If the people are given the power to vote themselves bread and circuses, then they will.” Someone else pays for that bread and those circuses, of course.

When bread and circuses are all that is left, however, they take on a mythological power. A sports game no longer serves as a mere distraction, but a cause for living and keeping on going to the horrible job, enduring the harridan girlfriend or wife, laughing off the selfishness of friends and neighbors, and tolerating a dying civilization that turns everything we do into waste.

The game becomes more important than the rest of life when the game is the only functional part of life. We live for the weekend, for an escape into alcohol, and for a scene in which something is actually really important, even though it is not. Football games are the new clashes of flags or nationalistic conflicts. They give people some sense of a center to life.

In theory, these people should be happy. They are prosperous; they have lots of gadgets and material goods. Yet at its heart life in a modern society is empty. Democracy guarantees that — absent an occasional Trump or Reagan — everything always gets worse and a permanent bureaucracy rules us for its own benefit. Jobs break our spirit and make us Stockholm Syndrome paycheck addicts.

Even worse, the focus on individual rights and the defense of the ability of the individual to do whatever they can get away with1 means that people are alienated. They have no group identity. They possess no sense of purpose except working to pay those bills and buy beer, bread, and circus tickets. Nothing they must do exists for any reason except a personal necessity.

Their leaders, who are only too happy to get those votes for bread and circuses, have unintentionally created a crisis. By reducing life to the minimum and appealing to individual self-interest, our civilization has removed anything of meaning from the lives of its citizens, so they have combined religion, politics, and social concerns into a single form, worship of the football game.

We often forget another quote from Cicero on this very topic, “The evil was not in the bread and circuses, per se, but in the willingness of the people to sell their rights as free men for full bellies and the excitement of the games which would serve to distract them from the other human hungers which bread and circuses can never appease.”

The human hungers which bread and circuses can never appease… we never mention these things in our society. After all, in a civilization designed around the individual, it is your job to find meaning in life, that is, while you are not working at your job, fixing all the glitchy gadgets, handling bureaucracy both governmental and private, commuting, and maintaining a family.

People are kept at a certain amount of pressure. There is always something that they must do; there is rarely time to simply be. And so, when given a chance to let loose, they tear apart their city and commit crimes and do anything else that will make them feel more alive through the connection to the bigger event, the football game.

This could explain why modern liberal democracies are dying out:

There might have been a time, they say, when liberal political systems ended in military coups and fascist takeovers, but that era has ended. What happens now is subtler and, in some ways, harder to defend against.

This is how democracies now die. Blatant dictatorship â€” in the form of fascism, communism, or military rule â€” has disappeared across much of the world. Military coups and other violent seizures of power are rare. Most countries hold regular elections. Democracies still die, but by different means. Since the end of the Cold War, most democratic breakdowns have been caused not by generals and soldiers but by elected governments themselves. Like ChÃ¡vez in Venezuela, elected leaders have subverted democratic institutions in Georgia, Hungary, Nicaragua, Peru, the Philippines, Poland, Russia, Sri Lanka, Turkey, and Ukraine. Democratic backsliding today begins at the ballot box.

Democracies, in this telling, donâ€™t die so much as they decline. The rhetoric that underlies democracy, the self-identity that is adopted by a democratic people, all that is hard to dislodge.

In other words, they fail by succeeding. Once a liberal democracy gains enough power and strength to fully implement itself, it becomes a source of misery, and then it perishes from gradual entropy instead of sudden terrifying threats like Hitler, Communism, or the far Right.

What looks like success as a modern society is in fact a form of grinding hell that its citizens cannot quite express in words, and with their minds ideologically straightjacketed because some things cannot be criticized, they have no hope of explaining what would be better.

When looked at from this angle, liberal democracy appears as nothing more than a bread and circuses cycle. The citizens threaten revolt, so they are allowed to purchase their own loyalty with individualistic comforts and conveniences, but eventually this order reaches the point where bread and circuses are obsessive because they are not meaningful enough, causing them to become a channel for inarticulate, resentful, and mute rage that manifests as an impulse to destroy.

Why else would you vandalize your own city after your team won? It is a chance to let off steam, to express something you could not put into words, and even more, to feel solidarity with others who are acting out the same. Especially for white people — once rulers of this land, now hated by their industry, elites, government, media, and academics — the need for a group and purpose is visibly painful.

This gives us some idea of how democracies die: having separated people into isolated units of one, these societies then shake themselves apart with tension because of the loneliness and alienation of that existence. Loneliness is a cryptic modern plague hiding in plain sight which slowly drives people mad:

â€œAttention is one of the most valuable resources in existence for social animals,â€ says Dr Geoff MacDonald, a psychologist at the University of Toronto with an interest in human connection. â€œIt was literally a matter of life and death. The people who didnâ€™t feel good around others, or didnâ€™t feel bad when they were separated from others, wouldnâ€™t have the motivation to do the things that are required to pass their genes down the generations.â€

Specifically, people have been shown to need a type of attention that psychologists call belonging. Abraham Maslow put belonging into his famous hierarchy of needs in 1943. In 1995, Roy Baumeister and Mark Leary concluded in their paper “The Need to Belong” that the available research did indeed show that everyone has a â€œstrong desire to form and maintain interpersonal attachmentsâ€. In particular, they identified that belonging means getting positive attention from people who know you well.

…People who feel they donâ€™t belong suffer terribly, and experience health problems comparable to smoking or obesity. They are the 18% of British adults who reported always (4%) or often (14%) feeling lonely, in a study published last year by the British Red Cross and Co-op. There are more lonely people in Britain than live in London. The problem is now obvious enough for the government to appoint a so-called â€œminister of lonelinessâ€, Tracey Crouch.

Belonging consists of having some sense of meaning to life so that it can be shared with others, and through those bonds, individuals can be appreciated for what they contribute. This happens for some at some jobs, and for others through intense cooperative activities like the military or scientific research, but for most people, it is simply absent. Everything is for the self, and nothing for the soul.

As modernity falls, people are looking for something that will give them the meaning they crave in life, but have been well-trained to oppose any of the options which would do it. The frustration that results must be massive, enough to make you tear down Philadelphia after a football game.

1 — As long as they can afford it, and excluding events that terminate the autonomy of another like most murders, rape, theft, and assault.