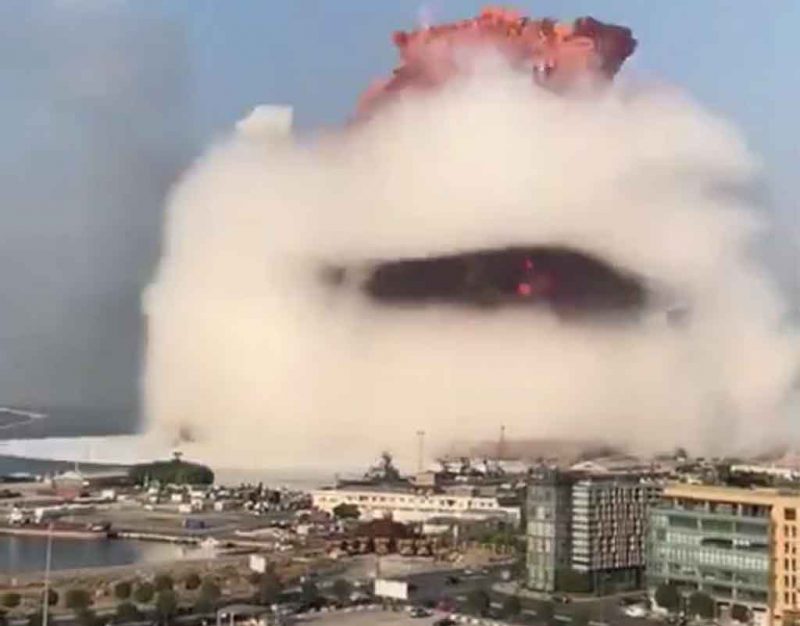 A massive blast hit Beirut today, leveling the port and airport area. Media suggests that this was an industrial accident caused by stored sodium nitrate:

Abbas Ibrahim, chief of Lebanese General Security, said it might have been caused by highly explosive material that was confiscated from a ship some time ago and stored at the port. Local television channel LBC said the material was sodium nitrate.

Raising suspicions, this event occurred two days before the verdict in the Rafic Hariri assassination trial:

A UN-backed court is to deliver its judgement on Friday on four suspected Hezbollah members tried in absentia for former Lebanese premier Rafic Hariri’s murder in a 2005 Beirut car bombing.

A fire burned for some time before the explosion, triggering smaller bright blasts which could resemble the fireworks some say were also stored on the site, shortly before the shockwave and mushroom cloud that rose from the blast.

Before we get into exciting theories, we should consider that massive industrial explosions happen sometimes:

On April 16, the Grandcamp was being loaded with ammonium nitrate as well as tobacco and government-owned ammunition. Cigarette smoking, although officially banned, was a common practice by longshoremen on the docks. Just two days prior to the explosion, a cigarette had caused a fire on the docks. On the morning of April 16, smoke was spotted deep within one of the Grandcamp‘s holds.

By 9 a.m., flames had erupted from the hold and within minutes it exploded. The blast was heard 150 miles away and was so powerful that the ship’s 1.5- ton anchor was found two miles away. The force of the explosion lifted another ship right out of the water. People working at the docks were killed instantly.

Pieces of flaming debris damaged the oil refineries in the area. A nearby Monsanto chemical storage facility also exploded, killing 234 of the 574 workers there. Nearly all of the survivors were seriously injured. A residential area of 500 homes was also leveled by the blast. Another ship, the High Flyer, which was carrying similar cargo, was pushed completely across the harbor. The crew fled when it came to rest, failing to notice that a fire had started and the next day their ship also exploded. Two people died.

If I were a terrorist or foreign power, and realized that someone was unwisely storing huge amounts of rapidly combustible material in a loosely-guarded situation, I might work up a time-delay device to set a fire, knowing that any evidence would likely be destroyed or blasted so far away that it would never be found.

Thanks to an alert CORRUPT correspondent on the ground who sent these terrifying videos.

Hitting the Wall and Ethnic Admixture at the Same Time | Periscope (August 4, 2020)