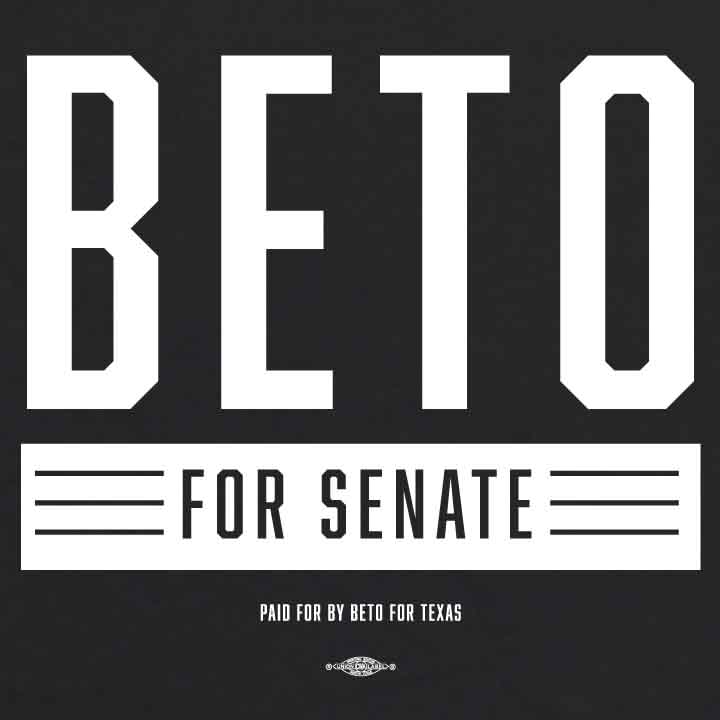 If we had to list to most annoying traits of the Left, at the top would be their tendency to form obsessive hive minds which operate relentlessly — think of methamphetamine addicts — toward pathological activities whose consequences they do not consider.

Consider the case of “Beto” O’Rourke, a third-generation Irish immigrant who has assumed a Spanish-sounding nickname in order to achieve a simple goal: making Texas turn blue, or be pro-Democrat, with the aid of the tens of millions of illegal Hispanic immigrants flooding the state.

Driving around the hip and tony neighborhoods in Texas, you might think that the ubiquitous black-and-white BETO sign with its blocky Soviet lettering was a badge of rank. All the cool kids are doing it, you see. It opens doors to have joined that team. Like the blood of a lamb above a door, it signifies for evil to pass on by.

Politics becomes a team sport when identity is involved, and for Leftists, being on “the right side of history” is more important than how well results turn out in reality. To them, turning Texas blue would be a major victory for their team, and that is all they think about.

What they do not realize is that they are running up against something we might call the Cortez-Gillum rule, after Alexandria Ocasio-Cortez and Andrew Gillum, both of whom won surprising victories considering their far-Left politics, inexperience, and the degree of Right-wing support around them. They were also both surprises to their Democrat overlords, who had hoped that demographic change would bring permanent rule by white Leftists, not those of the new demography taking over from white Leftists.

In other words, if Beto wins, he is the gateway to permanent minority rule in Texas. While this will achieve the symbolic victory of making a red stronghold blue, it also ends the possibility of white blue rule as well as white red rule.

As usual, Leftist victory is suicide, but since the symbols advance, we are supposed to cheer. That is the nature of ideology: individuals, reality, cultures, history, prosperity… none of those matter. What matters is that the right symbol is on the flag and the right idea is controlling the population.

A minority-ruled Texas will fare as well as Detroit, Brazil, Baltimore, Vancouver, South Africa, Haiti, and other areas where a minority has majority. Diversity means endless infighting. When one group gets on top, its first action is to begin smashing down the others, eliminating them however it can.

Within democratic societies, this is done by taking wealth from the other groups and simultaneously making life worse for that group by depriving them of whatever they customarily enjoy, whether that be safe streets or classical music. This parasitic society eventually drives out or assimilates (genetically destroys) the former majority.

As said before in this column, in a dying society the herd divides into two groups, denialists and realists. Denialists are in the bargaining stage of acceptance and want to be “nice” according to the new rules of the dying society so that it will treat them nicely. Realists are a minority pointing out that this will not work.

The “Beto Males” who hope to elect an Irish controller for a Hispanic majority so that it will keep doing what white Leftists find to be symbolically important are in over their heads. They do not understand enough of reality to see why their quest is a self-defeating one.

In the meantime, for the rest of us, this means that we have to face the grim truth of demography. When there are enough Others among us, we get Betos; after that, we get excluded entirely and shortly thereafter destroyed. Demography is destiny, and on this issue as others, one is either in denial or a scared realist.

To Survive, The Right Must Purge The Cuckservatives | Periscope (August 31, 2018)