Bernie Sanders’ comments on women are not as bad as reported 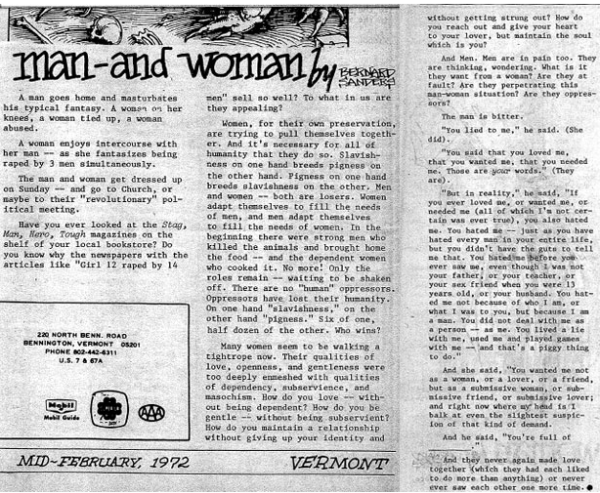 As reported by MRC, Socialist candidate for president Bernard “Bernie” Sanders once wrote an article about men and women, and it included three quoted lines that seem questionable out of context.

In the interest of fairness, let us look at the full essay:

Man — and woman, by Bernard Sanders

A man goes home and masturbates his typical fantasy. A woman on her knees, a woman tied up, a woman abused.

A woman enjoys intercourse with her man — as she fantasizes about being raped by 3 men simultaneously.

The man and woman get dressed up on Sunday — and go to Church, or maybe to their “revolutionary” political meeting.

Have you ever looked at the Stag, Man, Nero, Tough magazines on the shelf of your local bookstore? Do you know why the newspapers with the articles like “Girl 12 raped by 14 men” sell so well? To what in us are they appealing?

Women, for their own preservation, are trying to pull themselves together. And it’s necessary for all of humanity that they do. Slavishness on one hand breeds pigness on the other hand. Pigness on one hand breeds slavishness on the other. Men and women — both are losers. Women adapt themselves to fill the needs of men, and men adapt themselves to fill the needs of women. In the beginning there were strong men who killed the animals and brought home the food — and the dependent women who cooked it. No more! Only the roles remain — waiting to be shaken off. There are no “human” oppressors. Oppressors have lost their humanity. On one hand “slavishness,” on the other hand “pigness.” Six of one, half dozen of the other. Who wins?

And Men. Men are in pain too. They are thinking, wondering. What is it they want from a woman? Are they at fault? Are they perpetrating this man-woman situation? Are they oppressors?

The man is bitter.

“But in reality,” he said, “if you ever loved me, or wanted me, or needed me (all of which I’m not certain was ever true), you also hated me. You hated me — just as you have hated every man in your entire life, but you didn’t have the guts to tell me that. You hated me before you ever saw me, even though I was not your father, or your teacher, or your sex friend when you were 13 years old, or your husband. You hated me not because of who I am, or what I was to you, but because I am a man. You did not deal with me as a person — as me. You lived a lie with me, used me and played games with me — and that’s a piggy thing to do.”

And she said, “You wanted me not as a woman, or a lover, or a friend, but as a submissive woman, or submissive friend, or submissive lover; and right now where my head is I balk at even the slightest suspicion of that kind of demand.

And they never again made love together (which they had each liked to do more than anything) or never ever saw each other one more time.

While some in the media would have us jump all over Sanders for the first two paragraphs, it is clear that he is speaking of a specific man and woman, not all men and not all women, with the figurative characters he conjures. You can see the proof of this later on as he reveals a dialogue between the two. The “a man” and “a woman” from the first two paragraphs become the man and woman, which is a sign that he is referring to a specific pair in those comments.

The contrast he illustrates, between submissive Stepford wives and piggish Lena Dunhams, shows the split that sexual liberation has wrought in men and women. Without trust — a function of chastity — between the two, they are both trying to game each other, each trying to make the other submissive and resisting the demands from the other with piggishness.

From the final two paragraphs, it seems Sanders was heading for Kurt Vonnegut or Franz Kafka territory here. Assessing the quality of his attempt is left as an exercise for the reader, but it is clear that he is not writing a polemic about all men through the example of the man in the first paragraph.

I realize that it is tempting to stoop to the level of mainstream leftist media and become slander machines on the right. However, that leads to nothing but a cheapening of discourse. Wise advice:

Whoever fights monsters should see to it that in the process he does not become a monster. And when you look long into the abyss, the abyss also looks into you. — Friedrich W. Nietzsche, Aphorism 146, Beyond Good and Evil

Even though what MRC says — “Sanders shared his thoughts on male and female sexuality in ways that would cause a media firestorm if it had been penned by any current GOP candidate” — is true, the point is not to stoop to that level. Instead, do away with any media that lowers itself to that standard.

In the meantime, an interesting read from Socialist Bernie Sanders. I don’t know about you, but I learn from history, and pushing around stale ideas like Socialism makes me distrust anyone.

Do not take advice from your enemies | Gluten-free