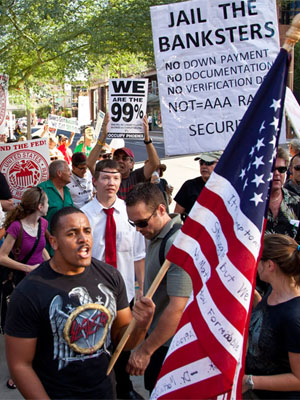 Bizarre as it is, most people identify more with sports teams than they do with important questions of their future.

For example, to me it would seem important to know what direction we’re heading in, or what our culture is, or even what our values are. In service of those values I’d camp out at a giant stadium to scream slogans, eat $9 hot dogs and throw beer cans at the umpires.

However, study after study shows that people go into elections knowing (on average) no more than they did incidentally, meaning that whatever was on the TV or in the newspaper on the desk when they passed by is the limit of their knowledge.

In addition, many people find little of identification in elections, issues, philosophies or discussion. While these things aren’t complicated, they also aren’t fun, and so people would rather pursue the game than pay attention to more important things.

In addition, the franchises are insanely expensive and the cities dish out hundreds of millions for the stadiums. It’s one thing to complain about military expenses or bemoan the state of the schools, but then the voters seem to approve these bread and circuses initiatives every time.

Not that more money will solve our education problem; if it were that easy, we would have solved it long ago.

I’m not against games. In fact, I like the games people play in these big stadiums. Perhaps if I went down my street, recruited a few dozen people, and set up massive games of touch football or baseball, we’d all have a lot more fun. It would be easier to engage than watching tiny figures on a screen.

Yet sports remains the national passtime, and it’s a safe activity that lets us discharge our aggression in “harmless” ways, and it keeps the herd from getting too unruly. As a result, we encourage it, perhaps not aware that energy which should go to more essential matters is getting frittered away.

Even worse is our tendency to make all things into a game which resembles mass media produced TV sports instead of the pickup football and baseball games of our communities past.

As a wise man has said, it’s irrational to attempt to roll back the past. All you can do is point our future in a saner direction, even if toward the values of the past. Along those lines, we can make a few suggestions.

First, games could become more natural. No one plays on a team unless they were born in the place that team claims to be from. Second, instead of politics being Republican and Democrat teams, we need it more like pickup games — shirts versus skins, on a specific issue, or even better, value.

For example, our bloated plutocratic politicians could gather in DC and call a game on whether our goal in schooling is to educate to an average, or to educate the best to the highest ability. Take them all out to a big open field and let them have at it. We’ll each cheer for the idea we want to win.

This vision is implausible perhaps, but no less implausible than the idea that a nation which values TV sports more than values can exist for much longer.