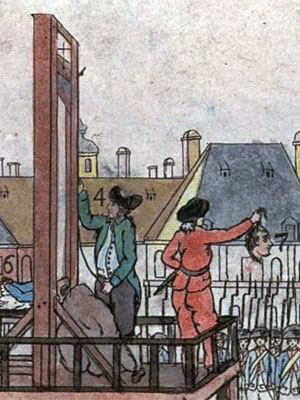 On July 14, 1789, the French People decided that they would remove humanity from its primal state and impose a new regime, which might be described as socially-mediated reality. In this regime, results and consequences took secondary importance to the perception of individuals of an event, which established a feedback loop by which individuals, given any choice of interpretation, chose one based on what they desired and not what they observed.

This was declared to be the great liberation of The People, who it is assumed were suffering under the arbitrary imposition of kings chosen by divine right who were presumed to have greater leadership abilities. In the following two centuries, France found herself embroiled in a disastrous quest for European power, two world wars, a massive loss of international prestige and eventually, a riot-wracked society known for its instability, existential misery and extensive bureaucracy.

The legacy of socially-mediated government is not a promising one. Not in France, nor in any of the nations to follow. When people celebrate Bastille Day, they are celebrating the idea that somehow the individual is oppressed, and needs liberation from any kind of hierarchy of leadership or values. The assumption is that when the individual is free, better decisions will occur, or at least life will be better.

However, this reveals the nature of the transition to socially-mediated reality itself: we are no longer focused on results and consequences, but on what humans think or — by that feedback loop mentioned above — what they want to think. A more arbitrary system of government could not be found, not only because humans are of different abilities, but because their desires are truly arbitrary. This system creates worse than a lowest common denominator; it creates a validation of illusion and then picks from the illusions possible one that flatters the most and offends the least.

Those of us who are alive now have inherited a society based on this order. Because it is of a “race to the bottom” order that is more popular and requires less competence, as soon as France lowered the standard, others adopted this new government. The next two world wars hammered out details of how the proles would rule, and created modern liberal democracy.

New liberal states kept the basic formula of individual sovereignty, egalitarianism, internationalism, gender equality and a desire for a universal ideology to replace religion, monarchy, heredity and culture which had been cornerstones of the French Revolutionary dogma. To it they added the idea of universal welfare and social support, probably sometime in the 1920s but not acted on until the 1950s, and in the 1960s, the idea of completely obliterating culture through globalism and forced mass immigration.

Socially-mediated reality creates a totalitarian system to enforce these principles. However, it is not centralized. Instead, it is enforced citizen to citizen with the weapon of ostracization used against those who do not conform to what is popularly considered to be desirable. Where older societies preserved the ability to have different opinions so long as they were not directly against the culture, liberal democracy instills a mentality of opinions being acceptable only if they agree with the dominant paradigm. This creates a meta-totalitarianism that causes each person to censor himself or herself before even speaking.

The original governments of humanity were based on consequences. Those who were best were promoted and formed a natural aristocracy; those who were bad were driven out, and those who did nothing exceptional remained as underlings. Since traits like intelligence, nobility, perception and leadership ability are inherited — like all other traits — this produced a leadership that had constancy, wisdom and subtlety. Instead the modern state has brought constant chaos and internal social strife, even if masked behind a veneer of civility.

We have replaced consequences with social perception and it has made us an uglier society. Liberals demand that society be based not on consequences but on intentions, which means that we use our actions to signal what we intend and not to achieve results directly. That way, there is no thinking, because thinking requires us to take a leap of faith in ourselves and act as we see as right, and then assess whether the consequences turned out as we had estimated. This enables everyone to be “equal” because their abilities are never measured, only their public gestures which are taken as bona fides of intention.

The revolution brought us the kingdom of the individual. We deposed the kings, and replaced them with a mob. This mob expands in every direction because it has no self-control, and foments massively internal dissent because it is totally inconsistent. Its goal has never been consistent policy, only what its members desire and how they can make that seem appealing to others. If you can imagine a mob made of salespeople and psychologists, each manipulating all the others, this is what Bastille Day has wrought.

The tragedy of Trayvon | Why I am a monarchist