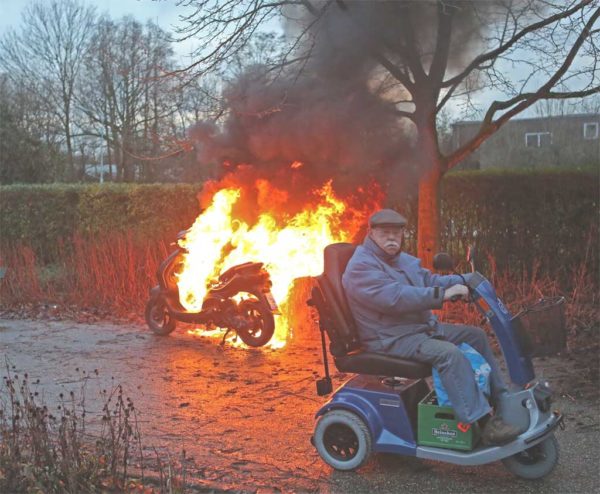 How do you explain the historical and cultural train wreck that is the Boomers to kids who will be born in 2030? Perhaps a metaphor is in order.

Boomer goes to Greatest Gen dad and explains that all the cool kids have cars and he wants one too. Greatest dad got a greater job after the war and cashed out like in Vegas, so he buys Boomer a brand new Mustang for his 16th birthday. Boomer rushes off to show his friends without even saying thanks.

Boomer drives car around for years going to parties, protests, and concerts. He eats in it, has sex in it, and sleeps in it. He doesnâ€™t take care of it because he thought he was too good for auto shop. He uses low octane gas, never changes the oil or even washes it.

After years of driving around he comes upon a hitch hiker named Gen X. Boomer offers Gen X a ride. X notices that the car smells like cheap brick weed and the interior is spattered in semen but against his better judgment he gets in anyway. Boomer starts lecturing X about how Cream is the greatest band of all time. X starts to believe vinyl records were truly superior to digital audio. X tries to be like Boomer but fails, Boomer says X has no purpose, is spoiled and ungrateful. Boomer threatens to kick X out of the car so X shuts up. Boomer has one too many to drinks and drives the car into a ditch then blames X for not warning him.

After X helps Boomer get the car back on the road they continue on eventually coming upon another hitch hiker named Millennial who gets in the back seat. X started to warn Millennial about Boomerâ€™s driving but just put on his headphones instead.

The price of gas goes up so Boomer starts charging X. â€œGas, grass or ass, no one rides for free!â€ Millennial thinks this is a good idea and tries to change the radio station. Boomer protests but Millennial explains what all the cool kids are listening to and itâ€™s not that shitty stuff from the 90s. X is so uncool.

The car starts to run out of gas, and X doesnâ€™t have anything in his wallet so Boomer asks Millennial to chip in. Millennial is paying off student loans on his retail job at the Gap and stages a protest like the ones he heard about from Boomerâ€™s stories about the 60s. Boomer gets pissed and threatens to get Millennial fired. Millennial tries to explain how Boomerâ€™s behavior caused X to go broke and the price of gas to skyrocket.

Boomer is pissed. He pulls over to the side of the road and picks up a few Mexican fruit vendors which start to crowd out Millennial. Boomer makes X ride in the trunk. X has not eaten in days and is too weak to stop Boomer anyway. Boomer picks up more Mexicans. Mexicans donâ€™t chip in for gas as expected. Millennial is now angry and confused. Boomer tells Millennial not to worry, besides look, tacos!

A few more miles down the road the car blows a tire. Boomer blames Millennial for not warning him but Millennial couldnâ€™t warn him because of all the Ranchero music playing in the back seat. Boomer gets out to inspect the tire as if he could change it anyway, but lack of ability never stopped Boomer from believing his can do anything. He is special that way.

Boomer notices there are traffic spikes spanning the road.

From out of nowhere Generation Zyklon bashes Boomer over the head with a tire iron. He take the keys and lets X out of the trunk. Millennial tries to get behind the wheel but X smacks him a few times. X and Zyklon throw out the Mexican hitch hikers. Boomer keeps calling them racists but they just tell Boomer that Hitler loves them. Millennial didnâ€™t notice the eviction because he was looking at p0rn on his phone.

X tells Boomer to start walking. He tells Boomer Hendrix, Joplin and Lennon are having an impromptu jam session over the hill in a faraway land and he should hurry before he misses out. X, Millennial and Zyklon change the tires, service the engine, and clean the dirt off the Mustang before heading back to the town Greatest lived in.

Somewhere in the distance Boomer is muttering to himself about how cool it is to go green and give up his car. He always wanted to see the world anyway. Life begins at 70.