Avoiding The Fate Of The Know-Nothings 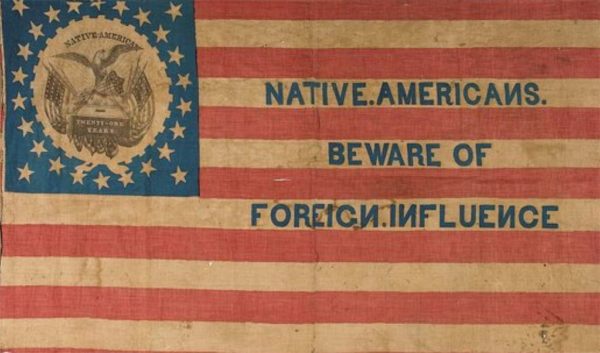 The Alt-Right is in the process of taking over the Republican Party. Itâ€™s a hostile takeover to be sure. Weâ€™re making inroads with Americans and the Identitarians are shifting the debate on immigration in Europe. However, if the Alt Right is to truly become the mainstream political movement that the Left fears it can become, we must look to history to understand how to avoid the fate of the America Party, otherwise known as the Know-Nothings.

We must develop a coherent message beyond just immigration reform and white identity. Indeed if we are to fully engage white Americans we must understand that much of what concerns them isnâ€™t just immigration, but the effects of immigration. We need to engage with them in terms of economics, as in, we need something to present beyond basic bitch conservative â€œlower taxesâ€ and â€œfiscal responsibility,â€ as if those are anything more than marketing buzzwords. We need to engage with whites when it comes to education, both primary and secondary. We need to have a coherent healthcare solution, or at least the beginning of one. And ultimately, we need some kind of foreign policy for dealing with the Middle East, China, India (the rising power thatâ€™s often forgotten) and we need to be ready for a multipolar world where the United States is not the lone superpower.

To make this clearer, look at the difference in the success of President Trump and the failures of Wilders and Le Pen. Trump tied immigration to jobs in the rust belt states and to the need to control our borders. He did not win with immigration alone, but instead made it a part of a comprehensive strategy to â€œMAGA.â€ On the other hand Le Pen and Wilders were seen in their respective countries as immigration-only candidates and while it should be noted that Wildersâ€™ Party for Freedom (PVV) did quite well, he did not win his election. Perhaps it will take a second election cycle in Europe for Europeans to embrace anti-immigration and anti-migration platforms, but it wonâ€™t happen without incorporating plans for other aspects of the populationâ€™s concerns.

White identity will be the defining issue of the next generation of Americans. We cannot afford to lose potential voters, many of whom will be former Democrats or libertarians, because we failed to make a comprehensive and coherent platform centered on issues of practical, real-world importance to whites.

So letâ€™s look at the history of the Know-Nothing Party in the United States to make sure we can avoid their fate. First, they operated as an independent party. That was a little more feasible in the nineteenth century, but America was still effectively controlled by two major parties. The Know-Nothings were the response to rising anti-immigrant sentiment in the 1840s centering on the influx of Catholic Germans and Irish. This is what earned the party the label of anti-Catholic. And indeed this helped them do very well in the 1850s.

But their success was short lived.

The Know-Nothings broke along predictably geographic lines due to the issue of slavery. Anti-slavery members went Republican while pro-slavery members joined the Democrats. But is there an issue such as slavery that defines the twenty-first century? At first glance not really. It would seem the Alt-Right is situated in such a position that no major issue will destroy it. However, this isnâ€™t necessarily true. The Second American New Right, a composite of Alt Right and Alt Lite, is fracturing as weâ€™ve seen at the recent free speech rally in Washington DC, as well as at other rallies around the country.

The Alt Lite seems hell-bent on not only distancing themselves from the Alt Right, but by eliminating it from public spaces. The reason though is clear: the Alt Lite isnâ€™t a right wing movement at all. Theyâ€™re really no different than liberals. In fact youâ€™ll often hear them claiming that they are classical liberals or that they are defending â€œWestern valuesâ€ but without mentioning that those values are the product of the European people.

The division will come and is in my opinion, already here. The Alt Right is rooted philosophically in a rejection of Enlightenment values such as democracy, equality, universalism, and â€œhuman rights.â€ By contrast, the Alt Lite struggles to hold on to anything other than a pro-Trump vision for the future. The breakup of the New Right will come as soon as the Alt Lite realizes they must either side with the liberals or side with the Alt Right. Civic Nationalism, the proposition nation, and other comfortable compromises are untenable.

As the breakup comes the Alt Right must be prepared to address issues of interest to whites across geographic, economic, and the social spectrum. If we fail to create meaningful policies centered on keeping whites as the majority in America we will find ourselves confined to the dustbin of history. We will find ourselves defending Spanish language debates between the GOP candidate and the Democratic candidate. Or we will find ourselves looking for ways to repatriate to the few countries in Europe that are, for now, resisting demographic replacement.