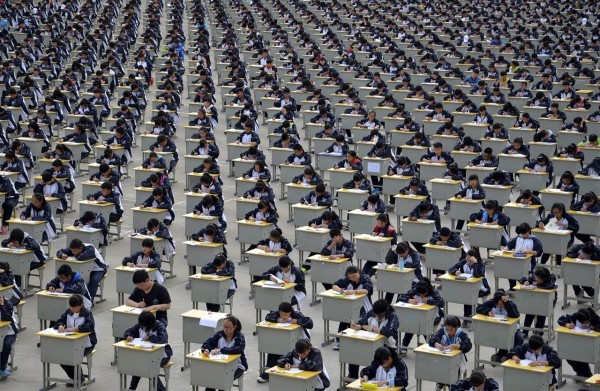 The mystery of civilizational death remains with us: at some point near or at their peak, great civilizations simply drop off the radar of history. Either no one is around to communicate what happened, or no one cares to, but either way history becomes like a badly spliced film reel, going from a scene of prosperity in one moment to empty, third-world failure in the next.

One theory holds that these societies get ahold of some kind of erroneous notion and treat it as truth, with each layer of society emulating the one above or below it until all are acting on the same untrue assumptions, resulting in a massive crash with reality at some point. This crash may occur in the environment, economy, society, military, genetics or all of the above, but its cause does not lie in them. Rather, its cause emerges from the denial of reality itself.

I reach Freeland, which is clean and dull, by God. Benway is directing the R.C., Reconditioning Center. I drop around, and “What happened to so and so?” sets in like: “Sidi Idriss ‘The Nark’ Smithers crooned to the Senders for a longevity serum. No fool like an old queen.” “Lester Stroganoff Smuunn — ‘El Hassein’ — turned himself into a Latah trying to perfect A.O.P., Automatic Obedience Processing. A martyr to the industry…”

(Latah is a condition occurring in South East Asia. Otherwise sane, Latahs compulsively imitate every motion once their attention is attracted by snapping the fingers or calling sharply. A form of compulsive involuntary hypnosis. They sometimes injure themselves trying to imitate the motions of several people at once.)

“Stop me if you’ve heard this atomic secret….”

Our civilization in the West now represents a group of Latahs. The self-proclaimed elites, selected for telling the people what they wish were true but in fact is lies, act out a pantomime of a healthy republic and the others, in wanting that to be true, emulate those elites. Then the next layer of society imitates that in turn, all the way down. The paradox is that the elites got there by imitating the lowest levels of society and then, with its leadership corrupted, society defaulted to that lowest common denominator as others followed. And nowhere in this process did anyone reference reality or pay attention to its relevance.